Ajinkya Rahane’s form in test cricket has been wobbly of late, but it is time for him to show his class against the Windies. The doubts over his form or lack thereof of it is also because of the fact that he is a pillar for the team in the Test format. He, along with Virat Kohli and Cheteshwar Pujara is one of the primary stars who played a crucial role in the transition phase of Indian cricket from the ‘Fab Four’ generation.

Whereas the other two have gone from strength to strength in the previous two international seasons, Rahane has somewhat flattered to deceive. In 2018 itself, he notched five half-centuries but failed to convert even one of them to a three-figure score.

Here, I try to comprehend what had been troubling him recently and the series of opportunities that the upcoming series against West Indies presents to him:

What do the numbers say about Rahane?

Rahane had scored some brilliant overseas century in the first half of his career so far, including the renowned one in the victory at Lord’s in 2014.

However, in 39 innings in 2017 and 2018, the right-hander has notched only a single century including eight fifties as well.

Those numbers are arguably unappealing for a crucial player, occupying such an important middle-order position. Moreover, his slip in form coincided with the team undertaking one of their very difficult cycle of overseas tours.

2017 was the first time in his Test career that his average dropped below 40, as he concluded the year with that of 34.6 from 18 innings. Furthermore, it deteriorated in 2018 as the numbers fell down to 30.7 from 21 outings on the crease.

Rahane has some great numbers against the West Indies. Image: AFP

What is even more surprising is the fact that the start of the decline was preceded by his best-ever year in international cricket, in terms of average at least. It read 54.4 from 15 innings in 2016, which comprised of a couple of half-centuries and centuries too.

Noteworthy is the fact that India played most of its Test matches at home in 2016, which could have helped Rahane better his case in hindsight.

Overviewing the situation in whole:

The 31-year-old’s persistent dwindle in form has a lot to do with the inability to cement his spot in limited-overs cricket too, in my opinion. He had started off as someone who can be a figure to reckon with in all three forms of the game for India.

However, some insecurity must have crept in with the constant shuffling of his spot in the side and even resulting in being dropped from the Test side on some occasions.

Test cricket is a test of one’s mental strength as much as it is about regarding the skill and the physical aspect of the game. To dig in and fight against the tide when the situation does not favor someone is what eventually defines your success in the longest format. 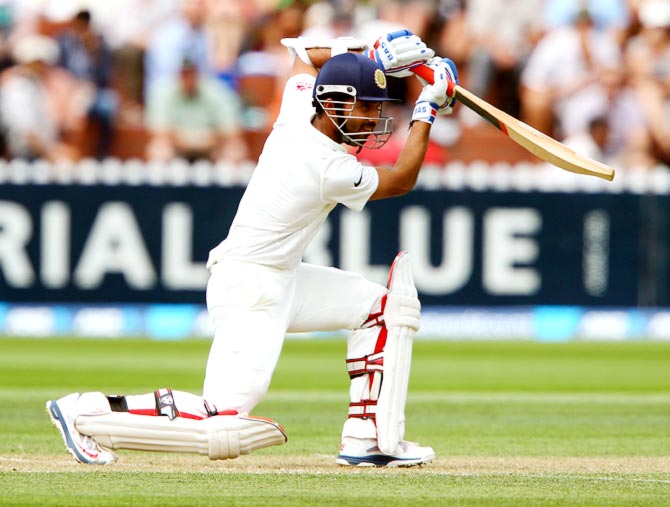 The Windies series is a golden opportunity for Rahane to get back in form. Image: Getty

In the embryonic phase of his career, Rahane was accustomed to these attributes and they were on display on a consistent basis as well.

Somehow, someway, he stopped getting those big runs and eventually, the string has cumulated to strike back with a bunch of exciting talents ready to knock down the door and stake their claim in the Test team.

However, experience and a calm head are indispensable characteristics to possess in the current hard and fast nature of international cricket. At just 31 years of age, Rahane does have the luxury of time to grasp back his form and get in the groove to rub shoulders with the best in the business yet again.

He needs persistent backing from the think-tank for the same as well. Both, Ravi Shastri after the tour of New Zealand earlier this year and Virat Kohli before leaving for the Caribbean last month voiced their support in abundance for the deputy skipper.

That definitely shows that the Mumbai-based batsman isn’t out of the plans and the roadmap of the Indian team in the near future at least.

But, for the sake of his own self, Rahane will have to start doing what he does best. He had made his mark as a stroke player, yet a calming influence in the middle whenever present. Maybe, to break the shackles that have stunted his progression in the past two seasons, he needs to evolve and adapt himself into the process that stimulated him to incredible success until the end of 2016.

The two Tests against the West Indies could be the perfect launch pad to seed his re-emergence. He has had a good six months away from the rigors of the international game, though with not much luck and form. He struck a half-century, though at a very meager rate and then departed shortly afterward in the second innings of the three-day practice match.

One can only hope that the senior bloke only builds on from that innings to even better feats in the upcoming Test matches.

There is little for India to gain from this series. If they manage to bring Ajinkya Rahane back to the touch that propelled him to such eminence firstly, it would be a very huge positive for the grueling tests that await them in the future.