The capital of an eastern state, Jharkhand, Ranchi use to be known as Lohardaga in earlier times. The name literally translated as the center of iron mining. The city is an industrial town with a lot of iron mining industries around it. But there is one more thing that Ranchi is more famous for, and that is its natural beauty, the city has several waterfalls, beautiful lakes, and picturesque hillside surroundings. It is not what a typical industrial city in India, Ranchi offers beautiful weather around the year, a rich cultural heritage, scenic beauty, and many tourist attractions.

Talking about the most famous things from Ranchi, one can argue that neither the scenic landscape with beautiful waterfalls nor the industrial heritage that the city has can qualify as the most famous thing from Ranchi. But if there is anything that has put Ranchi on the world map, then it is an individual called, Mahendra Singh Dhoni.

Yes, India's most successful captain and talismanic leader, MS Dhoni, belongs to this part of the world. Born and brought up in the city, Dhoni led India to the world cup wins in the T20 and ODI formats as well as took the Indian test side to number one in the rankings. Known for his sixes on the park & flamboyant hairstyles off it, Mahi, as he is affectionately known, was also known for his nerves of steel, probably coming from his origins in Ranchi.

Must visit spots of Ranchi to India vs South Africa, 3rd Test 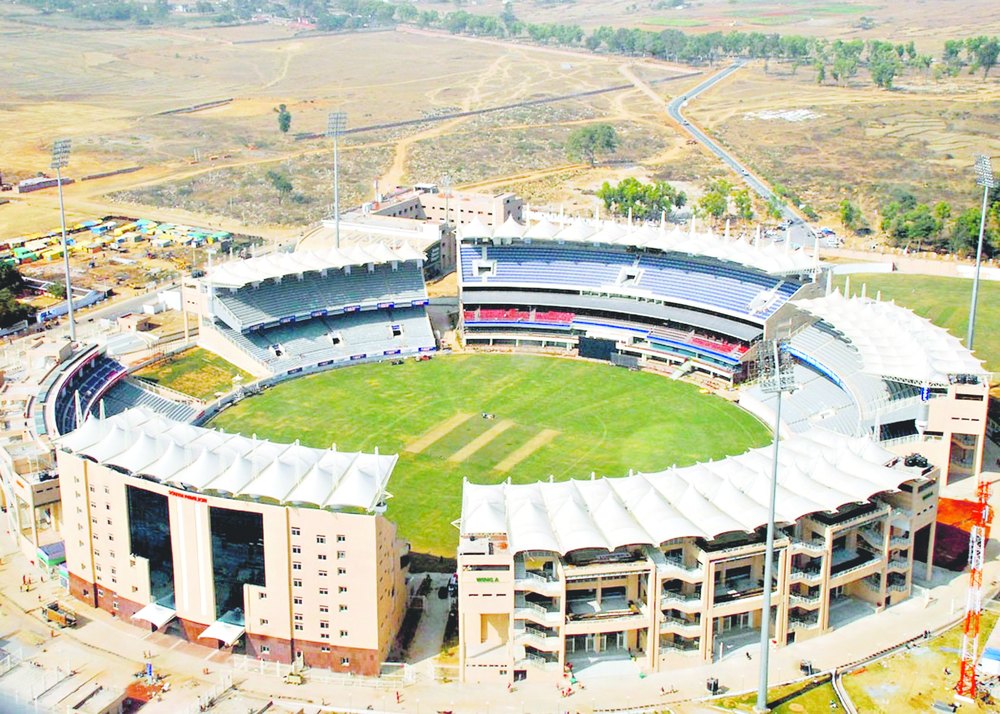 The JSCA Stadium is a sight to behold. Image: Telegraph India

This will be the focus of the cricketing world this week as India takes on South Africa in the third Test of the Gandhi-Mandela Series starting Saturday, 19th October. The 50000 capacity stadium was inaugurated in 2013 and hosted its first-ever test match when India played Australia in 2017. It has the distinction to be the first stadium with hill stands in India.
The Waterfalls of Ranchi 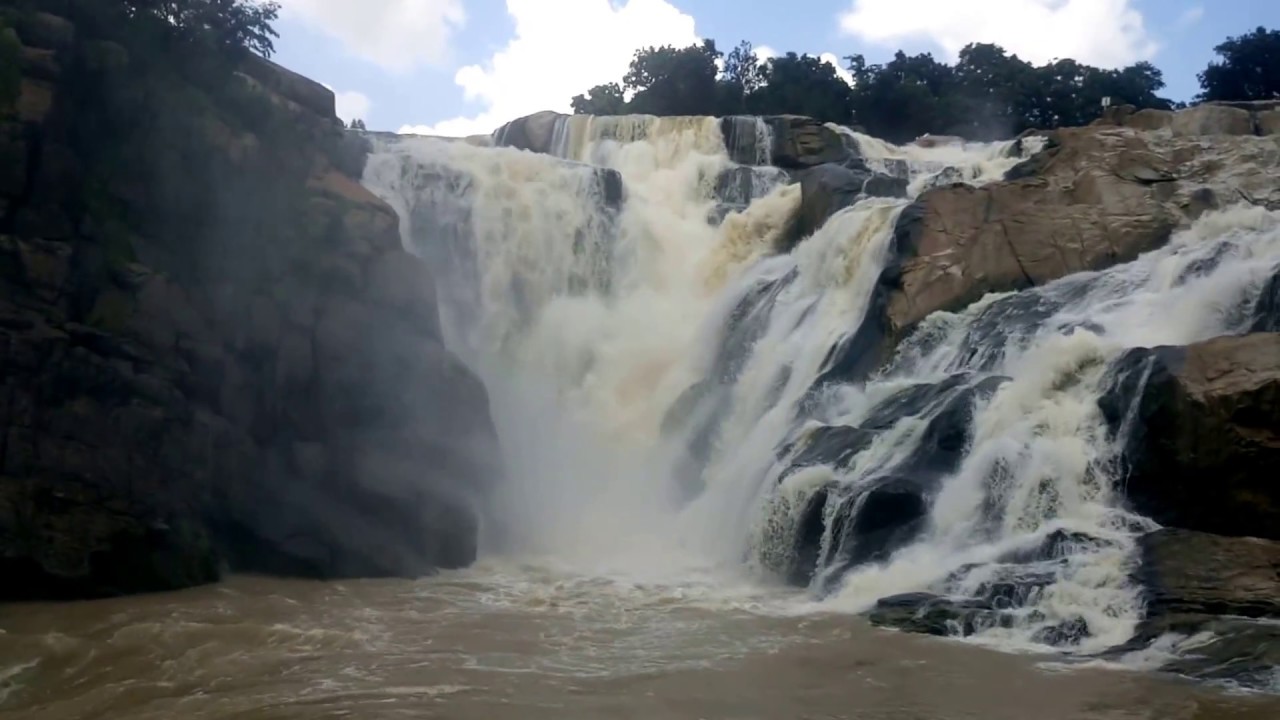 Dassam Falls in Ranchi is a must-visit spot. Image: Youtube

Ranchi is considered to be one of the most popular picnic spots or tourist destinations, especially in summer, due to the number of beautiful waterfalls in and around the city. Dassam falls in the village named Taimara, sees the waterfall from the height of 144 meters from the Kanchi River and has many adventure sports activities like river rafting and bungee jumping for visitors to enjoy. 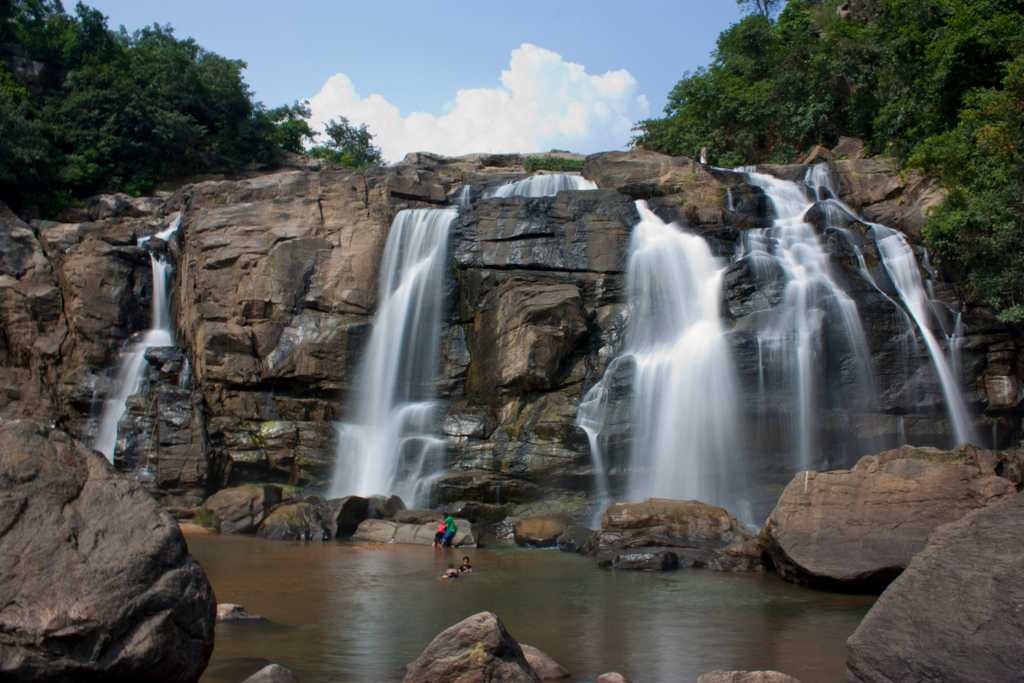 A combination of five waterfalls Dehalt tongue and is formed due to the breaking of the river Banai & has five different streams. 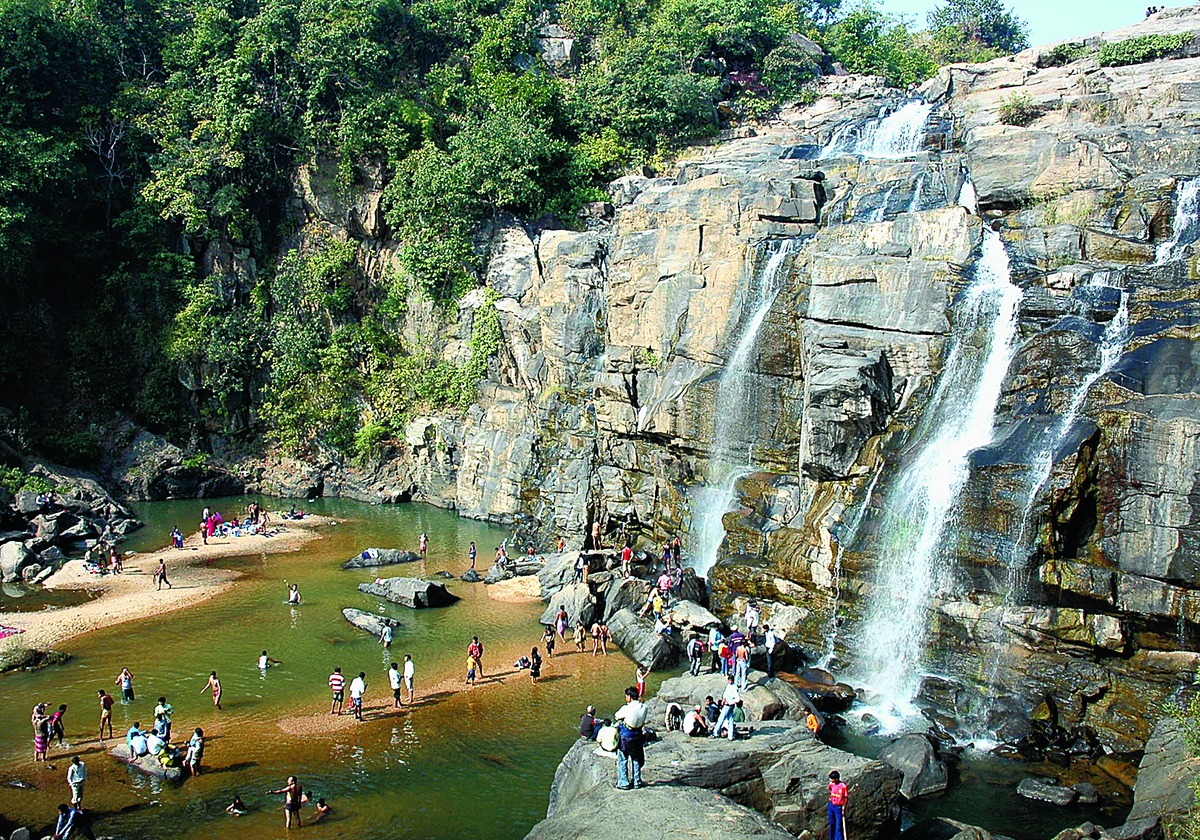 For tourists who like a more serene and spiritual atmosphere, Jonha falls also known as the Gautam Dhara is an ideal place. The waterfall is not as aggressive as others and has a Gautam Buddha temple and ashram nearby where the visitors can stay and enjoy the peaceful beauty of nature.

The biggest and most scenic of all the falls around Ranchi is the Lodh falls, the highest of Jharkhand at 468 feet, it falls with river Burha on three sides. It offers spectacular and breathtaking views to the tourists and is situated in the middle of the forest, offering a unique experience. 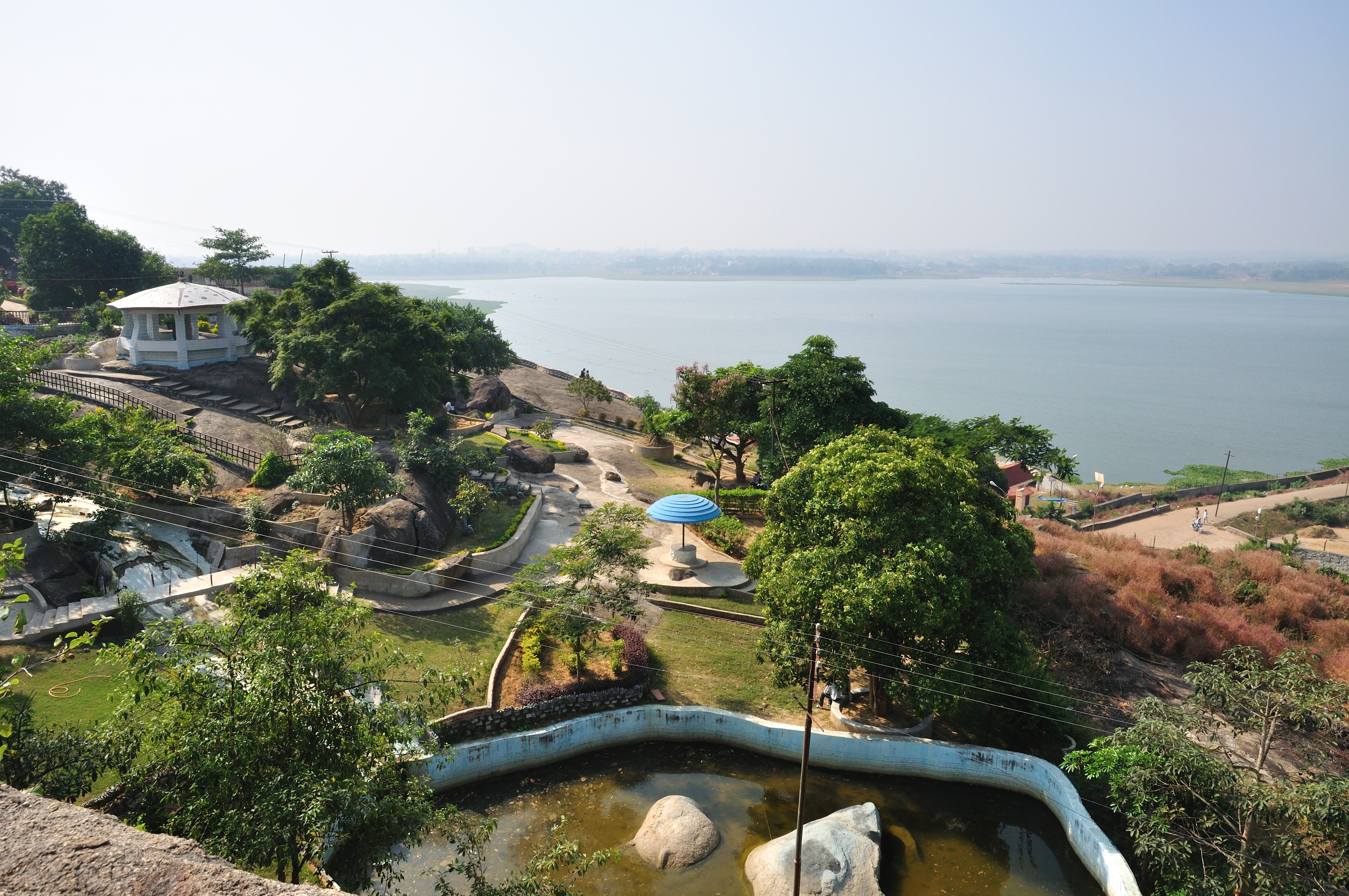 The Rock Garden in Ranchi is an outstanding picnic spot. Image: Mouthshut

Situated just 9 km from Ranchi, the Gonda hill is a trendy picnic spot in the city. A water reservoir on the top, Kanke lake, and dam in the foothills and a rock garden made is a beautiful place to spend some time with the family. The garden is similar to the Rock garden of Jaipur and has many structures made of granite.

Situated just 3 KM from Ranchi, the hill is the place where Rabindranath Tagore wrote many of his books. It is a scenic place with quiet surroundings. At the foothills, there is Ramakrishna Mission Ashram, which is a popular destination for its followers.

Jharkhand is a state with a heavy influence of Buddhism, and because of that, the local cuisine is dominated by vegetarian dishes. It also has a massive influence on the Bihari and Tribal culture, as well. The city has some fantastic food options for tourists.

Starting from breakfast, Dhuska is Ranchi's favorite dish to start the day with. Its a spicy dish made with rice flour and pulses. Cooked in mustard oil and served with gram curry and potato curry, its a perfect combination to start off your day. 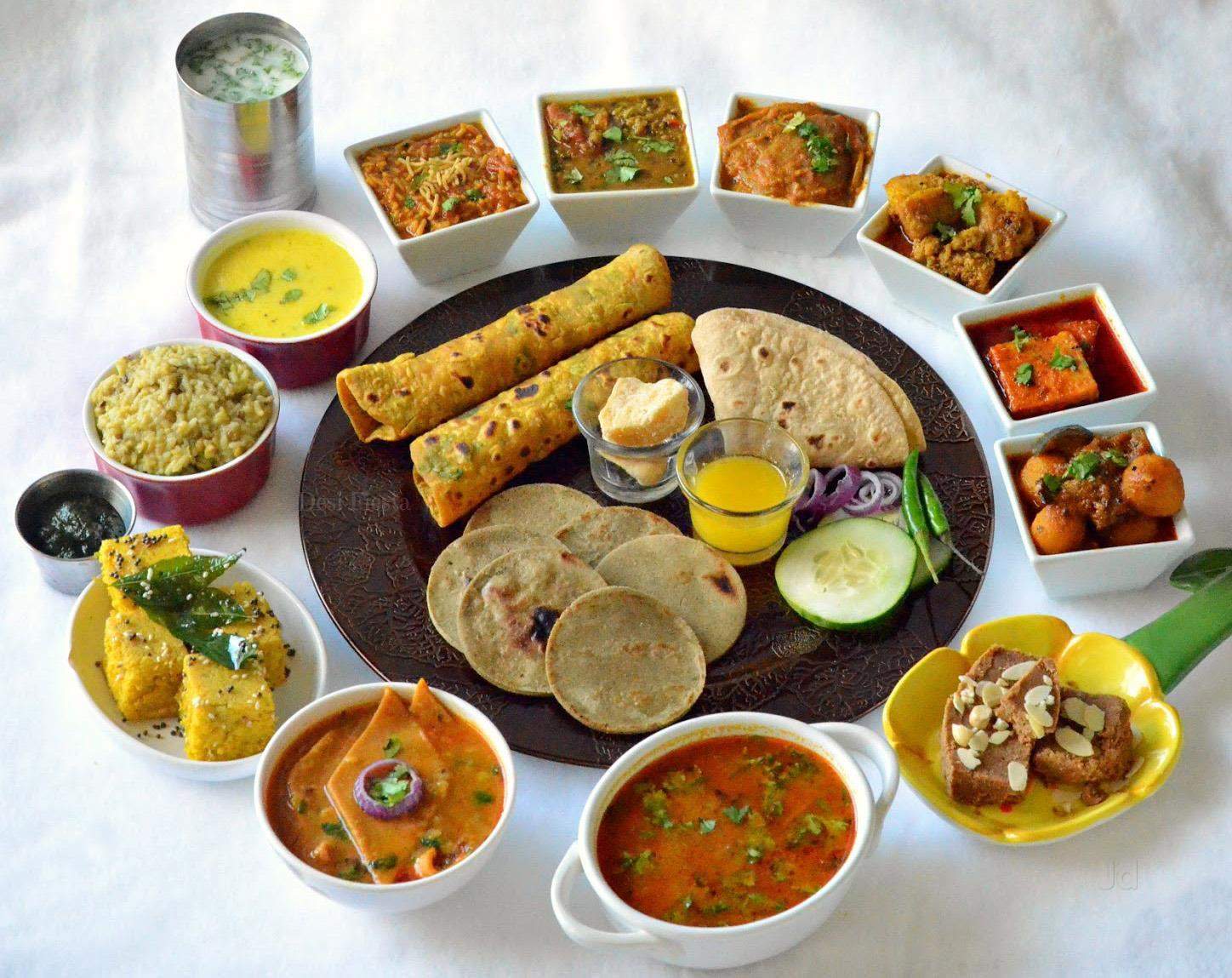 Ranchi has a wide palate to meet all your culinary indulgences. Image: Justdial

Being such a state with a large green cover, Jharkhand's food has a lot of unique dishes from its forests. Puttu or Putka is one such dish made from the very famous Mushrooms of the state. The mushrooms grow beneath the soil, and only the local people can find it. It is mostly available in the monsoons; the dish is very popular as a dish on the lunch menu.

Bamboo Shoots, yes you heard it right. The state loves its bamboo shoots, and it is used in many dishes mainly as a vegetable. Ranchi is famous for its own version of a sweet made from Bamboo Shoots made with mustard oil and has a unique sour and sweet taste to it.

Litti Chokha is a popular Bihari dish which is very famous in Ranchi. It's a winter dish often made on the bonfire during the colder months of the year and is completely oil-free.

All in all, Ranchi is a great place to visit in the eastern part of India. It has excellent weather, scenic beauty with lush green landscape, and an amazing variety of cuisine to fall in love with.

All in all, Ranchi is a great place to visit in the eastern part of India. As well as the beautiful waterfalls, it has excellent weather, scenic beauty with lush green landscape, and an amazing variety of cuisine to fall in love with.