World Cup 2019: Bring on the biggest party of the summer

10 Teams. 150 players. Everybody plays everyone. Big sixes. Bigger totals. Wrist spin. Death-over masterclass. Humdingers. Anti-climax. Goof-ups. Heartbreaks. Jubilation. Experience. The 12th edition of the biggest festival of cricket- ICC World Cup- is finally upon us and over the course of the next 45 days we should be in for the best of times as the carnival, consisting of the best cricketers of the world, unfolds.

It is the start of the cricket World Cup and as I write this piece the memories of the past events begin to flood my mind. The dominance of the West Indies in 1975 and 1979, Kapil Dev running backward to take what will some say the most important catch in the history of Indian cricket to dismiss Viv Richards, Mankad and Walsh's sportsman spirit in '87 Mike Gatting's fateful reverse-sweep in 1987 final, Javed's jump in 1992; Wasim Akram's dual piece of magic which England till date does not have a clue of; Jadeja's annihilation of Waqar; Aamir-Prasad face-off; Jayasuriya's mayhem and the rise of Sri Lanka in '96; Gibbs dropping the World Cup; Tendulkar upper-cutting Shoaib, the heartbreak of 2003 final and the disaster that was 2007, Woolmer's unfortunate death and the fiasco of the 2007 WC final, Yuvi's guttural roar, MSD's six to end a nation's 28-year wait, South Africa's heartbreak 6.0 in 2015 and off-course the mix-up between Klusener and Donald twenty years ago, I can go on and on and the memories wouldn't stop. 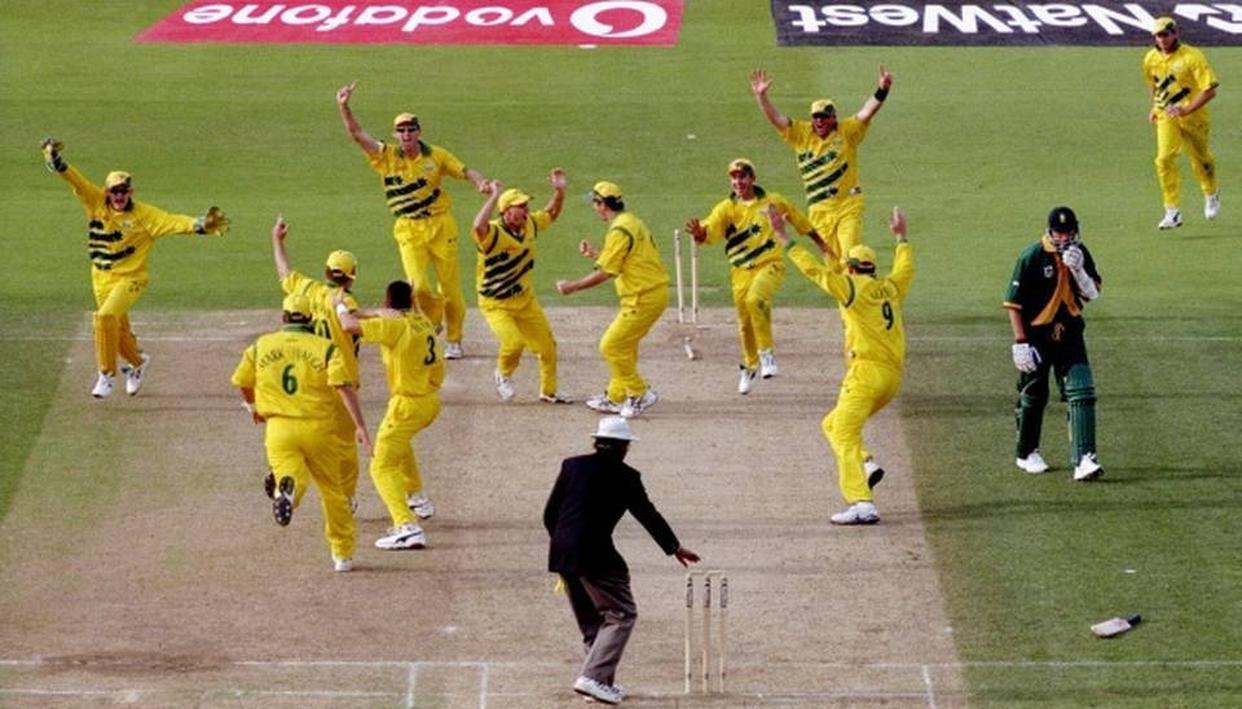 And, why should they? For every sports fan, no event evokes as much emotion as a World event does.

So, what has changed since the last World Cup in England?

Well! a lot, to be honest. For starters hosts, England is the pre-tournament favorites, something you won't have heard of leading into 1999 event or any global event for that matter in the past twenty years, thus banishing the painful memories when they were knocked out a day before the tournament's official song was released. Since their shameful exit from the 2015 World Cup, England finally broke away from the shackles of conservatism and are now one of the trendsetters as far as modern-day batting in ODI cricket is concerned.

ODI cricket, in general, has changed for that matter. The 1999 World Cup was played with a specially designed Dukes ball with a field restriction of 15 overs, twenty years later two Kookaburra balls from either end with three different kinds of fielding restrictions and with the players' having the luxury to challenge the on-field decision of the Umpire.

Flat tracks in unison with the changed rules to go along with the impact that Twenty20 cricket has had on the mentality of the batsman, the scores in ODI cricket are on the way up with sides' like England pushing the envelope and even dreaming off one day scaling Mount. 500 which could be a real possibility, dare I say, on grounds like Taunton or Trent Bridge during this World Cup.

The tale of two new balls

The last World Cup held in Australia was the ODI event played with two balls from either end and we know what happened thereafter. Centuries were scored for fun. One of the major reasons that prompted the ICC to introduce the rule of using a new ball from either end was after there was growing concern about the middle-overs phase where the passage of play was increasing out to be dull thanks to the Kookaburra ball going soft as it got old.

But, what has done is render reverse-swing and conventional off-spin out of fashion. Think back to the 1992 World Cup or the 2011 event for that matter where the Wasim Akram and Zaheer Khan used reverse-swing as their key weapon to bamboozle the batters. Remember how Alan Lamb and the likes of Michael Hussey were completely flummoxed with the artistry of those two champion bowlers. Well! thanks to the two new balls, you won't see that happening during this World Cup.

Mayhem at the top

It's fair to say that the opening pair of Sanath Jayasuriya and Kaluwitharana revolutionized the thinking behind a teams' approach to the first 15 overs. At a time where ODI batting was still a sedate affair and a conservative approach of preserving the wickets initially dominated the narrative. That all changed in 1996. Suddenly, there was Jayasuriya and Kalu, who were going gung-ho right from the outset and optimizing the first 15 overs.

Twenty three years, a plethora of change in rules and aa T20 revolution later, teams' are using contrasting strategies in the first ten overs. In an era where the batsman isn't much challenged in the middle-phase thanks to the use of two new balls and fielding restrictions, teams' like India see much value in preserving their wickets in the first ten overs before going all-out thereafter.

On the other end of the spectrum lies England who thanks to their belligerent opening pair of Roy and Bairstow follow the Sri Lankan model of 1996 and have been hugely effective in the past four years. This World Cup has a plethora of tearaway openers in Roy, Warner, De Kock, Bairstow, Dhawan, Tamim, Fakar, Gayle and Guptill. Expect them to cause mayhem at the top of the order.

There is something inherently sexy about wrist-spin. The ability of the spinner to turn the ball both ways irrespective of the wicket on which he is bowling is what makes such a joy to watch. Since those heady days of the 90s, wrist-spin took a backseat with finger-spin dominating the narrative in ODI cricket.

But the use of two balls, a paradigm shift has taken place with the mystic art once again rising from the ashes and is now a key part of any side in white-ball cricket. Since the 2015 World Cup, three of the five leading bowlers in the world are wrist-spinners [Adil Rashid, Rashid Khan, and Kuldeep Yadav].

With the use of two new balls and flat tracks, wrist-spinners will be an X-Factor to their side and their ability to pick up wickets during the middle-overs that will go on to decide a lot of matches for their team.

And, we have a plethora has been. There'll be Shadab Khan carrying the Pakistani attack on his shoulders, there'll be Rashid Khan and his irresistible wrong'un; Imran Tahir will be ready for his last celebratory heist; Adil Rashid will be looking to lead England's campaign with the ball; Yuzvendra Chahal will dare batsmen by tossing the ball above their eyeliner while Kuldeep Yadav will preying on the batters by pitching it up before bamboozling him with the googly.

The importance of death overs-

With the teams allowed to keep an extra fielder outside the circle after 40 overs, run-making has become difficult at the death, but that has not stopped the sides' from trying to up the ante. England, off-course are the flagbearers in this regard with Jos Buttler at the helm. 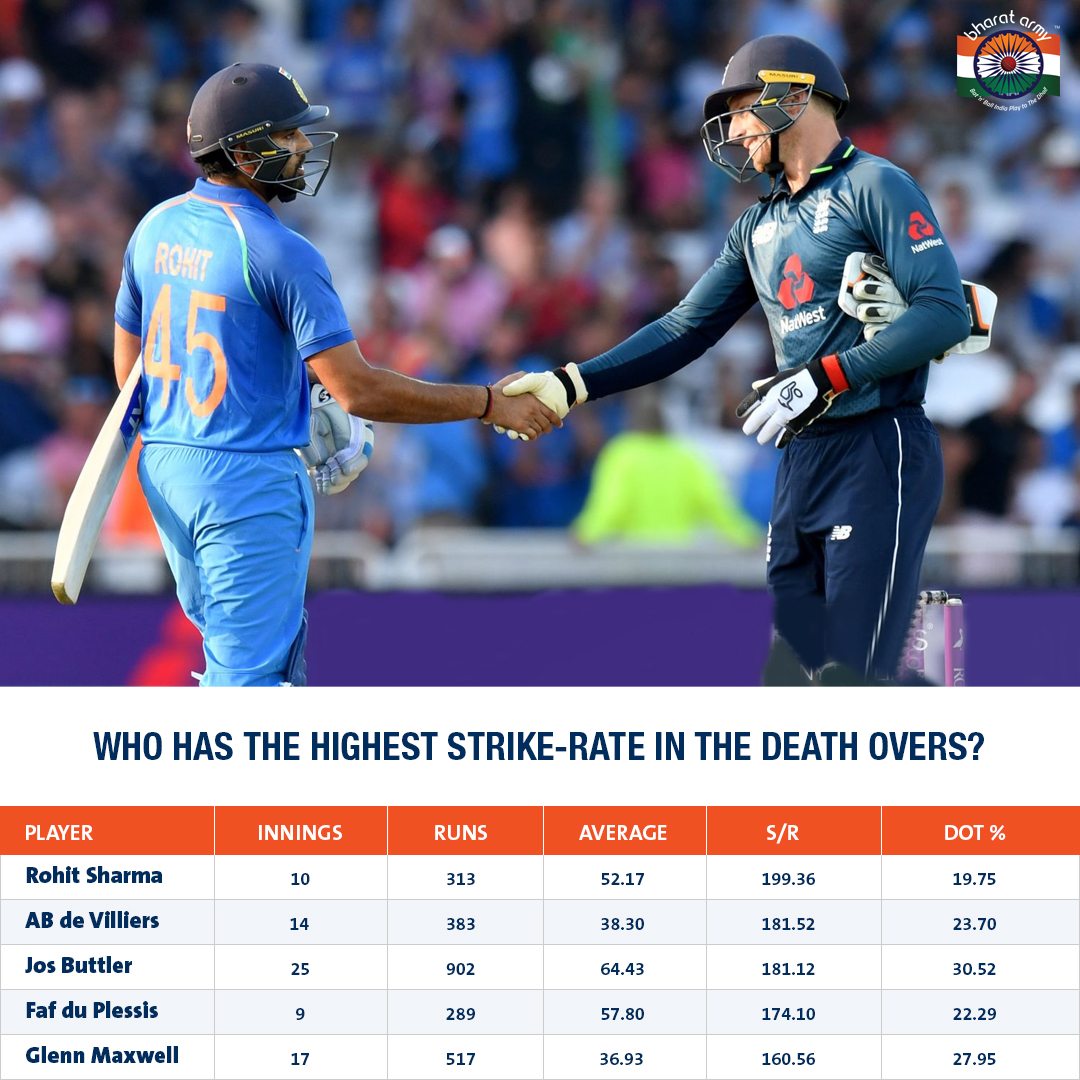 This World Cup has a plethora of power-hitters on every side. From Andre Russell, Glenn Maxwell, David Miller, Hardik Pandya to Jos Buttler, Ben Stokes and how they fare for their side will eventually decide the difference between a sub-par score and a match-winning one.

Wickets at the death- The Key 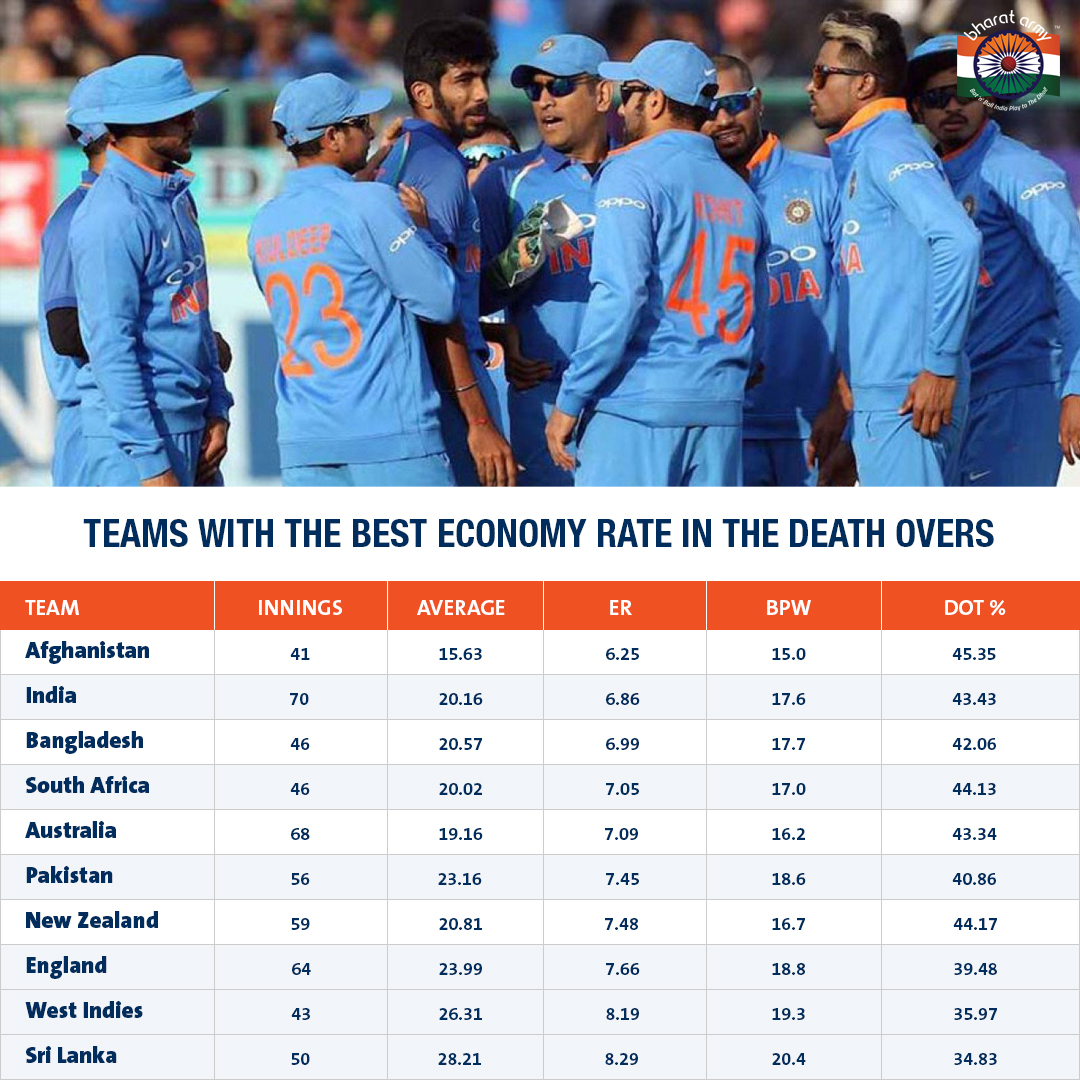 When you have such power-hitter the only way to contain them is by taking wickets. And, this is why the best bowlers at the death will make a difference. India has been the best side [excluding Afghanistan who has played just 41 games as compared to India's 71]when it comes to economy rate in the last ten overs. Jasprit Bumrah has led the pack with 44 wickets while Rabada, Mustafizur, and Cummins have also been hugely successful at the death.

Another interesting aspect if you see the numbers for the best death bowlers since the last World Cup is the number of spinners who have made a substantial impact in the last ten overs. Rashid Khan [41], Chahal [20], Santner [16], Adam Zampa [15] and Shakib Al Hasan all feature in the wicket-takers and the most-economical bowlers' list, something which we might see in this World Cup too. 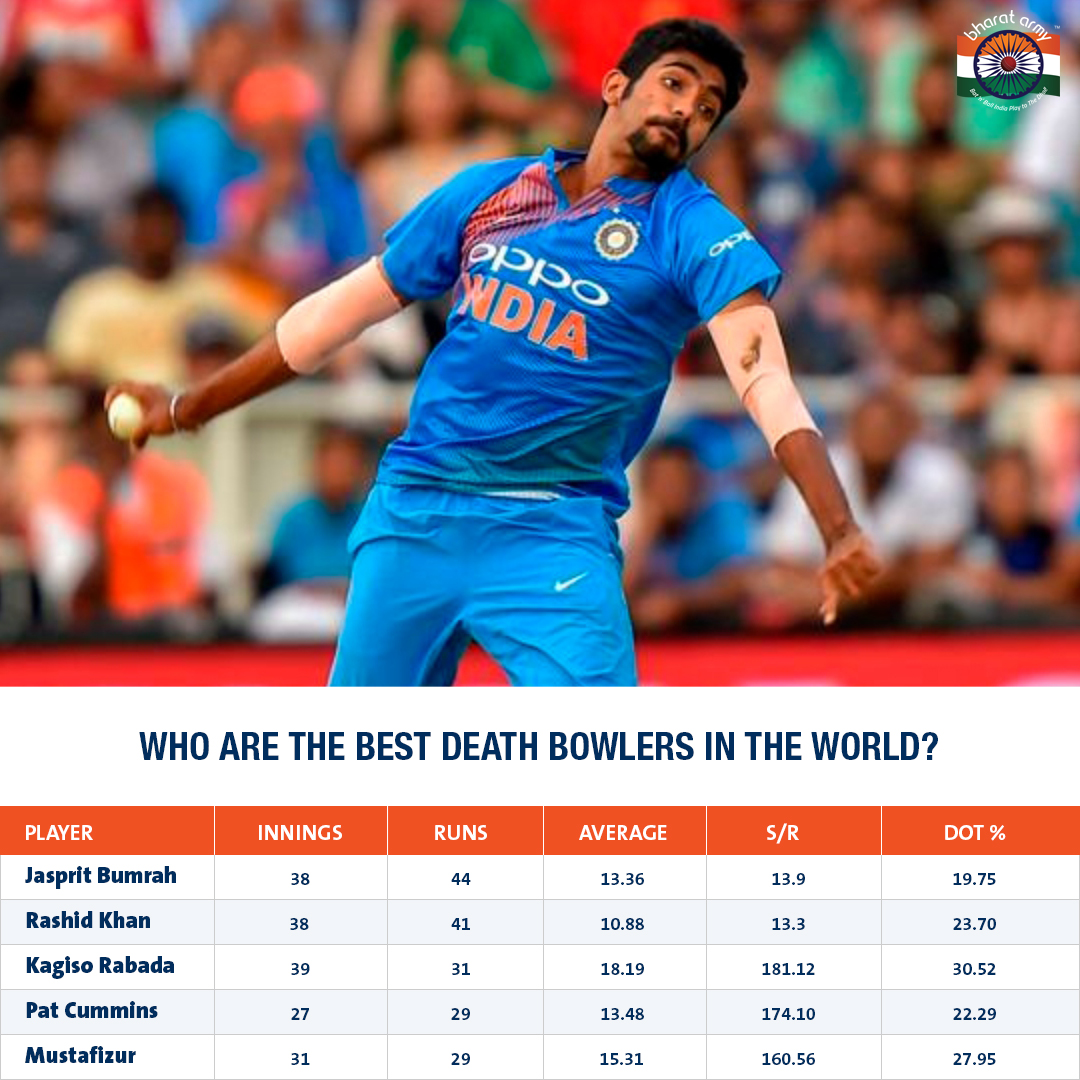 The best thing about this World Cup is its format. Breaking away from the traditional group-stage format, the ICC went back to its 1992 World Cup formula where everybody plays everyone in a round-robin format with the top-4 sides' proceeding to the semi-finals.

While you may argue that reducing the teams' to 10 defeats the long-term objective of spreading the game into unchartered territories, the 10-team format eliminates the ignominy of watching a lot of lop-sided encounters, and with every side playing a nine games in the league-stage, it almost certifies that a few upsets notwithstanding, the top-4 sides will eventually make it to the semi-finals and the 11-men man that lift the trophy on June 14th at Lord's will be worthy World champions.

So, who are the favorites? 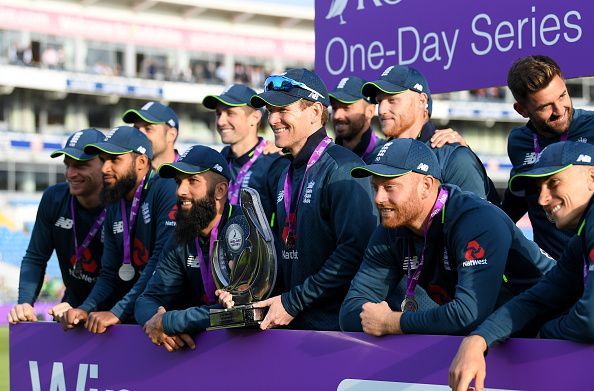 After a long time, this World Cup promises to be the most open tournament in a long time now. Yes, England is one of the favorites thanks to their swashbuckling resurgence since the last World Cup and home conditions but can they handle the pressure of expectation? India's consistency in the recent ICC events always keeps them in the fray while Australia's enviable World Cup record can never be discounted.

What about the Kiwis? A strong unit led by Kane Williamson, will they able to shed their moniker of being the 'dark horse'? Will Bangladesh emerge as a dark horse? Or will South Africa who for once are slipping under the radar rise like a phoenix? You cannot discount the unpredictability of West Indies, Pakistan either? or the giant-killing abilities of the Afghans. And, off-course, Sri Lanka can't do much worse than they have been doing for the past two years.

The World Cup gives memories for life. Not only to the cricketers who finally realize their dream of representing their country on the biggest stage but also to us fans. So, sit back and during the course of the next 45 days, enjoy what promises to be the biggest party of the summer.