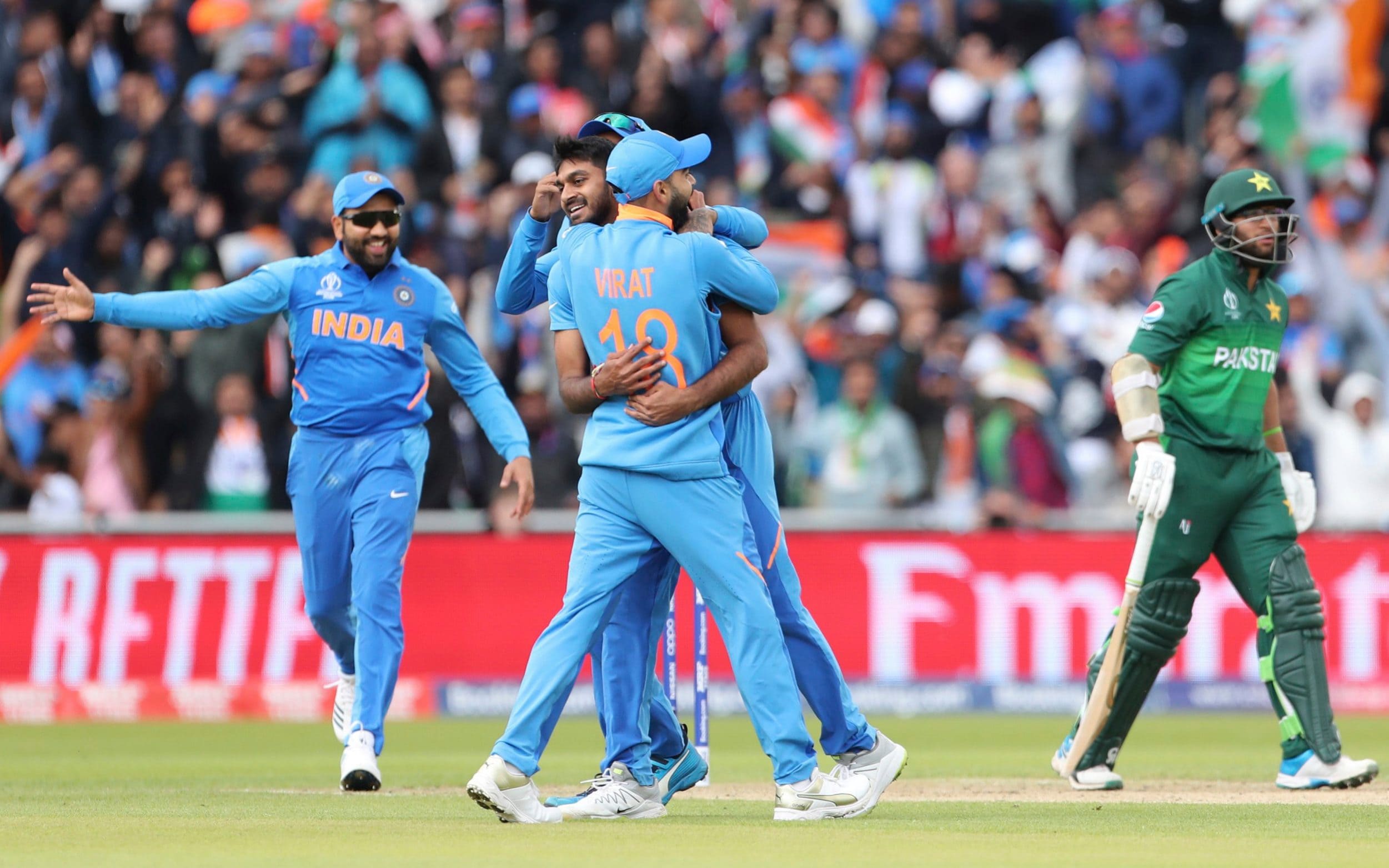 Manchester. What a mouth-watering prospect. A spectacle like no other or as the ICC's marketing team says "the biggest celebration of World Cricket". Isn't it? Well! Not in terms of competitiveness or the quality of cricket. Surely Not. Friday's encounter on a day where Manchester was bathed in Blue as supposed to its usual red, once again vindicated the gulf between the two arch-rivals.

It also proved that the 2017 Champions Trophy finals defeat was a mere aberration as the Men in Blue maintained their 100 percent win record with a clinical performance beating Pakistan in yet another one-sided Indo-Pak encounter.

The stage for Pakistan's seventh defeat to India in World Cup was set by Sarfaraz Ahmed's decision to bowl first after winning the toss. It was the same mistake that Virat Kohli did at the 2017 Champions Trophy finals. Like Kohli, it was going to make Sarfaraz and Pakistan pay. The decision was baffling on so many levels. Sure! The overhead conditions did play a part but given the fact that Pakistan had chosen two frontline spinners to go along with two part-timers, the decision surely wasn't in sync with their team selection and strategy.

And, his bowling unit barring Amir did not do his already flawed decision making any good thanks to their wayward line and lengths. Rohit Sharma once again proved why he is already an all-time ODI great. In the absence of his regular partner, the Indian vice-captain took it upon himself to lead the way with the bat with a sparkling 140; his second hundred of the tournament. Barring the run-out chance thanks to a misjudgment with Rahul was the only time when Sharma looked he could be dismissed.

It was not a typical Rohit Sharma innings. Sensing that Dhawan was not there to keep the scoreboard ticking and the fact that Rahul was opening after such a long time, Rohit got off the blocks pretty quickly, making use of every scoring opportunity that the likes of Hasan Ali and Wahab Riaz offered. But, it was the really the first over of Shadab Khan that set the ball rolling for the Men in Blue with the bat. On a track which was offering a significant turn, Shadab bowled on a shorter side and his first over where Sharma creamed him for two boundaries and a six (17 runs), set the tone for what was to follow thereafter.

Imad Wasim bowled tightly from the other end but the lack of any control from the other end allowed the Indian pair to settle into a hundred run partnership- the first ever instance for India against Pakistan in CWC's. After a nervy start, Rahul too got into his rhythm to bring up his first World Cup half-century. With India's score reading at 0-136, Pakistan desperately needed a wicket and Wahab Riaz duly obliged when he lunged Rahul into a drive, only for him to hit it straight to cover.

As we have seen in this World Cup so far, Virat Kohli took his time initially, playing second fiddle to a rampaging yet elegant Rohit Sharma. Sharma proceeded to bring up his 24th ODI hundred (off 85 balls) and looked prime for a monumental fourth double ton but for that fatal chip shot to short fine-leg. Rohit's dismissal prompted India to once again promote Hardik Pandya to the No.4 in a bid to up the ante. But, sensing that the all-rounder was struggling a bit with his timing, Kohli took it upon himself to break the shackles with a couple of boundaries off Riaz and Shadab and in the process also became the fastest to 11,000 ODI runs. Pandya miscued one to the third man before smoking Ali for a boundary over fine leg to finally get going.

Pakistan, courtesy Amir's brilliance and a rain-break fought back to limit the carnage in the end. The left-hander claimed Pandya, Dhoni, and Kohli to restrict India to 5-336. after they had threatened to score above 350 at one stage Pakistan had to break a plethora of records, including their own record of a highest successful run-chase (264 vs NZ, S/F 1999) and also the highest run-chase in all World Cup history (326 by Ireland vs England, 2011).

And, they received a huge fillip early on in their innings, when Bhuvneshwar Kumar went off the field in the third over after slipping during his follow-through. But, it lasted just one ball. Vijay Shankar [2-22] came to complete the over and landed a body blow when he rapped Imam Ul Haq in front of the wicket.

But with Babar and Fakar at the crease and India missing Bhuvi for the rest of the game, it was important for India to chip away at the wickets and kill the contest before the death. Kohli used Imam's dismissal to essentially fill-up the overs of Bhuvneshwar which allowed Fakar and Babar to settle into a partnership. The duo scored 0-75 during the period of 11-23 overs; the only phase of the play where Pakistan actually threatened to be in the game. In Bhuvi's absence, India needed their spinners to come to the party and boy, they turned up big time; highlighting their importance as a pair. If Virat Kohli is the lead guitarist of the team, the pair of Kuldeep [2-32] and Chahal are the drummers. With Fakhar (62) and Babar (48) threatening to take the game away from the Indians, Kuldeep produced a magic delivery to get rid of Azam, a dismissal that turned the game on its head. First the delivery: It was tossed up on off-stump, inducing Baba forward, before taking a sharp turn and drift to rip through his defenses. One brought another for Kuldeep as he removed Fakhar in his very next over who in attempt to sweep, ended up giving a simple catch to Chahal.at short fine leg. 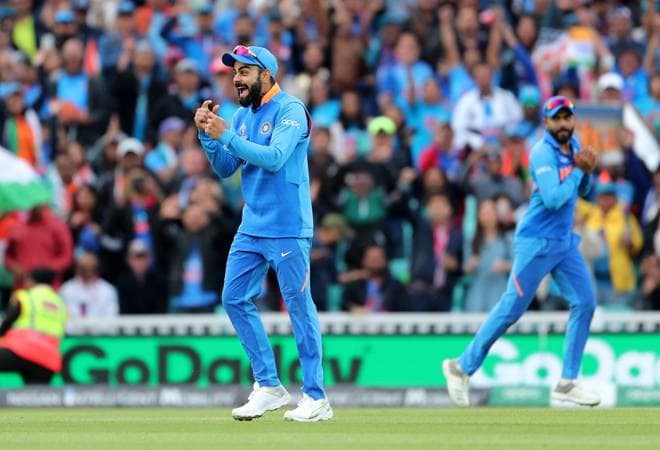 Once Fakhar and Babar were gone, the chase began to unravel pretty quickly as Pandya [2-44] removed Hafeez and Malik on successive deliveries. Pakistan endured a horrible collapse that saw them lose 4-12, ripping the heart out of their run-chase.

With the game turning into a no contest, the rain gods opened up once again and when they eventually relented, the revised D/L equation (136 runs in 5 overs) was just another reflection of what a damp squib the game eventually turned out to be, and that gulf in quality of both sides is equal to the gap between the yawning lips of Sarfaraz; more than that actually. In the end, two things did not turn up today: Pakistan and a contest, as it has been on several occasions in the past decade. Remember Adelaide? Birmingham? Mirpur, surely?

Today's game was nothing but another vindication of where the so-called 'rivalry' stands today.