Saurashtra outclassed Bengal in the final to secure their maiden Ranji Trophy. They have been dominant throughout the tournament and were very impressive in the final. Chandigarh competed in the Ranji Trophy for the first time this season and defending champions Vidarbha did not make it past the group stages. Wasim Jaffer of Vidarbha, however, became the first cricketer to complete 150 Ranji Trophy matches.

In a thrilling final competed between Saurashtra and Bengal, the former eked out a well-deserved victory. Read on to find out how both the sides made it to the finale and how it all played out in the end:

Saurashtra was drawn in Group B of the Ranji Trophy. They got off to a winning start in the tournament against Himachal Pradesh, winning the first Test by 5 wickets. Railways came next in their path and they turned out to be winners with ease. They thrashed Railways by a margin of an innings and 90 runs.

Saurashtra suffered their first defeat in the Ranji this season when Uttar Pradesh defeated them by an innings and 72 runs in Rajkot. Saurashtra avoided defeat by drawing the Test against Karnataka and Madhya Pradesh. They got back to winning ways against Baroda who they managed to defeat by 4 wickets. Games against Mumbai and Tamil Nadu were drawn and Saurashtra finished Group B in the second spot, with the same points as table-toppers Karnataka. Karnataka and Saurashtra qualified for the knockout stages. 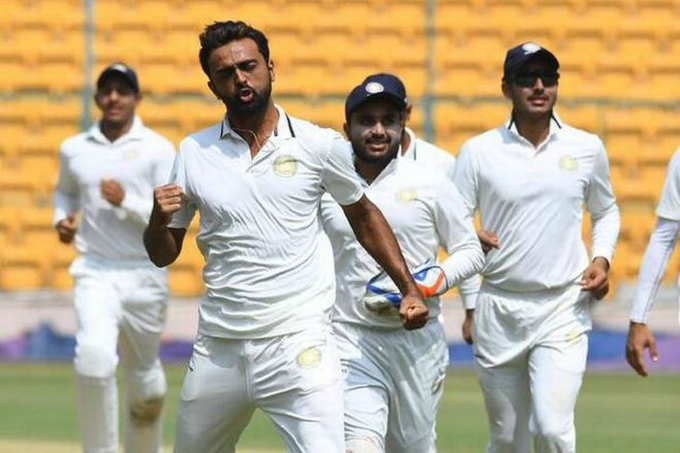 Bengal, drawn in Group A began their campaign with an 8-wicket victory over Kerala. They drew their match in the Tournament with Andhra and Gujarat. Bengal ended up suffering a 9-wicket defeat to defending champions Vidarbha in Nagpur but got back to winning ways in some style, defeating Hyderabad by an innings and 303 runs.

Round 7 began with Bengal drawing the match against Delhi. They finished the group stages with a 48-run victory over Punjab in Patiala which helped them finish second in the group with 32 points, three points behind Gujarat. Bengal qualified from Group A along with Gujarat and Andhra.

Bengal met neighbors Odisha in the quarter-final. A 157 from Anustup Majumder helped Bengal take a first-innings lead and as the match ended in a draw, Bengal managed to qualify for the semi-final. 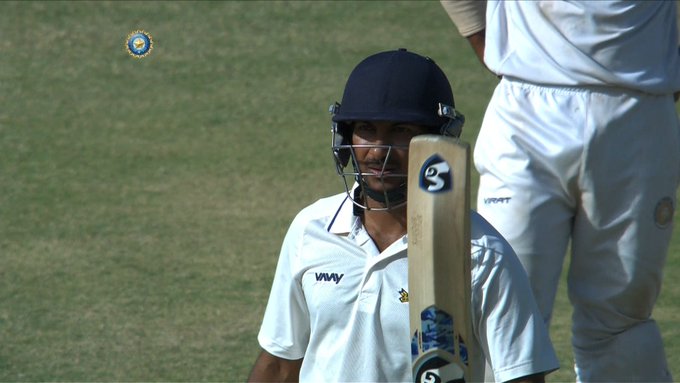 Bengal's Anustup Majumdar was in fine form throughout the tournament. Image: BCCI Domestic

Saurashtra won their semi-final against Gujarat by 92 runs. Sheldon Jackson scored a century as Saurashtra scored 304 in the first innings while Gujarat could only put up 252 runs on the board.

Bengal took on Karnataka at the Eden Gardens in their semi-final contest. Anustup scored a century once again as Bengal ran riot with a 174 run victory to set up a contest with Saurashtra in the final.

Jaydev Unadkat was at his fiery best as his spell allowed Saurashtra to take an important 44-run lead in the first innings. Propelled by an Arpit Vasavada century, the side from Gujarat put up 425 on the board in the first innings. The Bengal inning came crumbling at 381 once Unadkat hit his stride. Saurashtra ended up drawing the match in the final innings, thus winning the Ranji Trophy on account of their first-innings lead as the match ended in a draw.

After stumbling at the last hurdle last year, Saurashtra finally managed to go all the way this year and bring the beautiful Trophy back home. 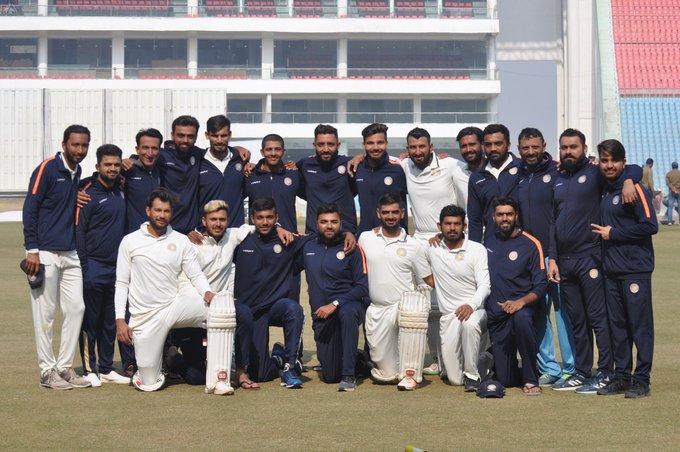 The Saurashtra team lifted the trophy for the first time in their history. Image: Cricinfo

This victory would mean much more special given the fact that Maharaja Jam Saheb, popularly known as Ranji is from Saurashtra. He was a noted Test cricketer and represented the English national team. Widely regarded as one of the best batsmen of all time, the Ranji Trophy, India’s first-class cricket tournament was named after him and inaugurated in 1935.

Skipper Jaydev Unadkat was the primary reason behind Saurashtra’s knockout victories. His 7 wicket haul against Gujarat propelled Saurashtra to the final in the first place. Going into the fifth day of the final, Bengal was at 354 for 6. They needed just 72 runs to take the first-innings lead. Unadkat took two wickets for 12 runs in seven overs and managed to run out Akash Deep and Bengal fell short by 44 runs. Unadkat celebrated wildly when Bengal was bowled out for 381.