Navdeep Saini: Dreaming on a Fastlane

Navdeep Saini is 26. He is fast, accurate and hungry for success at the highest level. The tearaway pacer is now one step closer to realizing the ultimate dream for a cricketer; representing your country at the highest level. The right-arm pacer from Karnal received a maiden call-up to the national side for the T20Is and ODIs against the West Indies in August. Saini was the second-highest wicket-taker in the recently concluded one-day series against WI-A, taking eight wickets from 4 matches at an average of 18.00.

So, who exactly is Navdeep Saini? Saini's journey thus far has been nothing short of a fairytale. Born on November 23, 1992, Saini hails from a humble background in Karnal. His father, a driver was employed with the Haryana government while his grandfather- Karam Singh- was a driver of Subhas Chandra Bose's Azad Hind Fauj.

Till 2013, Saini hadn't played a lot of cricket with the leather ball. The right-arm pacer from Karnal used to play with tennis balls in his hometown and would often earn Rs 200/ match. It was during the 2013-14 season that former Delhi cricketer Sumit Narwal saw Saini bowling yorkers at will in a tennis ball tournament. Saini was being paid Rs 200/match and Narwal, clearly impressed by what he has seen, called-up Delhi skipper Gautam Gambhir to check the bolter out in the nets.

What Gambhir saw from Saini in the next fifteen minutes was enough for the former Delhi skipper to rally around the right-arm bolter. Gambhir got into a heated argument with then DDCA vice-president Chetan Chauhan, to get Saini from Haryana into the Delhi team.

"Gautam bhaiya, Ashish bhaiya (Nehra), Mithun Manhas rallied around me. They said what’s happening in the periphery shouldn’t be my concern. We will take care of that, you only bowl,” Saini recalled the time when the DDCA officials were distributing pamphlets to keep the right-arm bolter from the Delhi team. 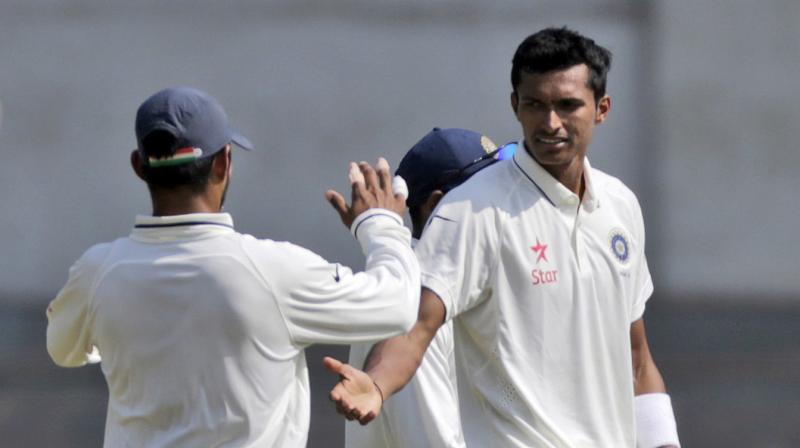 Riding on Gambhir's overwhelming support despite the odds stacked against him in the form of the DDCA officials, Saini made his FC debut in December 2013 as a part of a four-pronged pace attack which included Ashish Nehra, Parvinder Awana, and Sumit Narwal.

But despite being able to produce genuine pace and awkward bounce, Saini found it difficult to become a regular part of the Delhi side and it was only in the 2017 season, that the right-hander showed his real pedigree. Saini emerged as a spearhead of the Delhi bowling unit claiming 34 wickets in eight games.

Saini was also selected to travel to South Africa as a net bowler to be along with the national side on their tour to the rainbow nation but stayed back on Gautam Gambhir's insistence for the semi-finals against Bengal.

“I owe this life and my success to Gautam Gambhir. I was nobody and Gautam Bhaiya did everything for me. I was happy that I would go to South Africa but I called up Gautam bhaiya. He said Delhi needs you now for the semi-final and if you do well, you will be automatically in that Indian dressing room. I didn't think twice,” he told.

The rest, as they say, is history. Saini, in an inspired spell [7-79] of pace and awkward bounce, decimated the Bengal batting unit to take Delhi into the finals of Ranji Trophy; one they eventually lost to Vidarbha.

After having performed consistently in domestic cricket, a lucrative IPL contract looked inevitable. And, it came from the Royal Challengers Bangalore. Saini was bought for Rs 3 Crore in the 2018 IPL auctions by the Kohli-led RCB. But the right-arm fast bowler did not get a single game throughout the tournament.

Post-IPL, Saini was included in the India A team for tours to England and New Zealand. But Saini had a tough time on both the tours, having managed just 10 wickets in 4 FC games and just three wickets at 41.33 in List-A cricket. And, at times, when he bowled with pace, heart, and accuracy, the stats couldn't do justice to his efforts.

Like in the last Ranji season, where he constantly clocked over 145 kmph, but could only muster 14 wickets at an average of 34.

"I just need one breakthrough series" was Saini's own admission to the IPL website earlier this year.

And, boy didn't the right-arm pacer had some fun in his maiden season of the IPL. In what turned out to be yet another forgettable season for the Kohli-led RCB, Navdeep turned heads with his alarming pace (highest 152.85 kph, second only to Rabada (154.23 kph). Saini claimed 11 wickets in 13 matches- bowling a staggering 141 dot balls- in what turned out to be a breakout season for the right-arm pacer.

Saini traveled with Team India as a net bowler in the World Cup and after another impressive showing for the A-side in the Caribbean, the Karnal bolter earned what is a much-deserved call-up to the senior side.

Did the selectors miss the trick by not selecting Saini in Test cricket?

Should Saini had been tried in Test cricket? In my opinion, yes. For long, Indian selectors have been guilty of selecting cricketers in white-ball cricket based on their performance in FC and vice-versa. Remember Mohammad Siraj? The Vidarbha fast bowler has been the spearhead of his state's bowling unit with the red- ball.

But what did the selectors do? Yes, you're right. They played him in white-ball (Read: T20) cricket when it was clear that the lengths which Siraj bowled were ideal for the 5-day format. Siraj was never considered for Test cricket despite his consistent returns in the Ranji Trophy and has now fallen off the radar following mediocre returns in T20 cricket.

While that may not necessarily turn out to be the case with Saini, one feels the selectors missed a trick (as they always do) by not unleashing the bolter in Test cricket.