Kohli, Iyer and Bhuvi set-up a 59-run win for India

Virat Kohli's 42nd ODI ton coupled by Shreyas Iyer's 71 and Bhuvneshwar Kumar's 4-fer, the Men in Blue registered a 59-run win over the West Indies in what was a game full of milestones and rain stoppages.

Here's what happened in the 2nd ODI between West Indies and India:-

India got off to a horrendous start to their innings after Jason Holder decided to challenge the on-field umpire"s call for LBW in the very first over. Cottrell bluffed Dhawan with a series of outswingers to bring the ball into the left-hander. The replay showed that Cottrell had pinned the left-hander on his back leg and the ball would have crashed onto the middle-stump.

Virat Kohli announced his arrival to the crease with two boundaries in Kemar Roach's first over but the Indian captain nearly ran out his vice-captain Rohit Sharma, had there been a direct-hit, after the former turned back on the single, realizing he'd made a bad call. Kohli, though, looked in impeccable touch.

The Indian captain stroked some delightful strokes off Kemar Roach early-on, allowing Rohit to settle himself into some sort of a rhythm. The 30-year-old added another feather to his cap in the 5th over when a single towards backward point helped ho leapfrog Javed Miandad's (1912) record of most runs against the West Indies.

With Kohli looking in sublime touch, it allowed Rohit Sharma to play himself in. The duo brought up India's fifty in the ninth over with Kohli closing out the first powerplay with a nonchalant whip between mid-off and midwicket.

Rohit falls to Chase; Pant throws it away- Again.

With the seamers barring Cottrell proving to be expensive, Holder brought in Roston Chase in the attack, and the move paid dividends almost immediately after Chase induced a rare false shot from Rohit before having strangled him for runs. Rohit ran out of patience and in an attempt to heave Chase over long-on, got a top-edge to give Windies a wicket against the run-of-play.

Virat Kohli got to his 55th ODI half-century while Rishabh Pant too looked to be settling into a good rhythm during his 35-ball-20 before an attempted ugly hoike off Carlos Brathwaite brought about his downfall. Pant's dismissal brought Shreyas Iyer in the middle and the DC skipper, eager to prove his credentials in the middle-order, got off to a positive, stroking three boundaries in his first 20 balls. The duo of Kohli and Iyer ran well between the wickets, rotating the strike constantly as the total and their partnership approached their respective milestones of 150 & 50 in the 32nd over.

Records continued to galore for Kohli as the Indian captain leapfrogged Sourav Ganguly to become the 8th highest run-getter in ODI cricket in Holder's over. Iyer, on the other hand, looked at ease against the West Indian bowlers, flicking, cutting them at utmost will.

Kohli converts inevitability into reality; Iyer plays an innings out of the Master's playbook 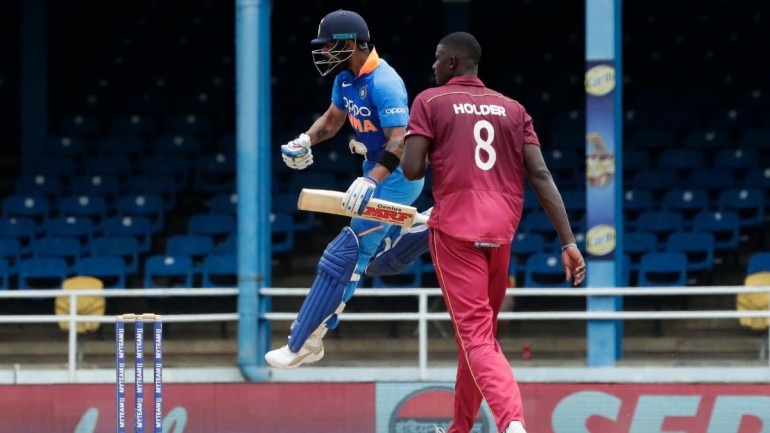 It was that sort of a day. A day where there was a resigned sense of inevitability about an impending Kohli's hundred. He was in that sort of mood today. Not the Kohli of the World Cup. But the Kohli that we have seen in the past decade. Those nonchalant flicks, cheeky dabs, leg-glances, authoritative straight sixes like the one he hit off Holder in the 35th over, and off-course the cover-drives, there was everything on the Kohli playlist today; a live lesson for Pant and Iyer in innings-building. And, the inevitability turned into reality in the 38th over with a flick to long-on, and the celebration said it. Iyer too got to his 3rd ODI fifty. The right-hander showed why he should have been given a rope for the No.4 spot with a matured innings, an innings straight out of Kohli's playbook.

Kohli (120) stepped on the gas after getting to his 42nd hundred, taking Thomas for 13 runs in the 41st over. But Carlos Brathwaite's clever change of pace proved to be the undoing of the Indian captain, bringing an end to his innings.

Post Kohli's dismissal, the rain gods returned to ensure the proceedings were halted for 20 minutes before play resumed again. Shreyas Iyer and Kedar Jadhav perished in trying to up the scoring rate. Bhuvneshwar too died for the cause as India once again to get the finishing kick, managing just 65 runs off the last ten.

Records galore for Gayle as India in another underwhelming return 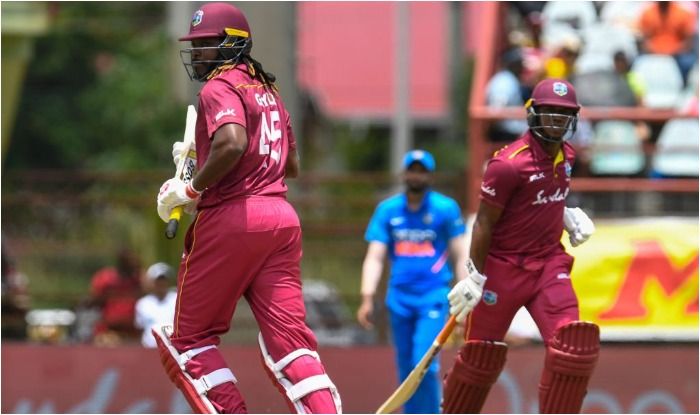 Chasing 270, Evin lewis started from where he had left off in Guyana, taking calculated risks against Bhuvneshwar and Shami as Chris Gayle once again took his time initially to get going. Lewis was particularly brutal against anything that was pitched up short dealing it with disdain.

Milestone galore for Chris Gayle in the 9th over of the West Indian innings. The Universe Boss nudged Khaleel for a single to leapfrog Brian Lara (10348) as far as most runs for WI in ODIs is concerned. But the party soon came to an end for the big man as Bhuvneshwar Kumar pinned him right in front of the stumps for 11. Gayle proceeded to challenge the decision when only the inside-edge could have saved him. It was dead as a dodo and the hosts not only lost Gayle but also the solitary review up their sleeves.

With Gayle departing, the onus was on Lewis and Hope to steady the ship. But Hope chopped it onto his stumps off Khaleel Ahmed to give India another breakthrough. Shimron Hetmayer survived a close call for caught-behind against Ahmed before rain once again proceeded to put a halt on the proceedings.

DLS makes the equation tricky for the Windies; India chipped away at wickets at regular intervals

The West Indies were set 270 to win in 46 overs as per the revised DLS equation and the duo in Hetmyer and Lewis came out with positive intent. But just as the partnership was settling in, Hetmyer, in an attempt to pull Kuldeep top-edged it straight in the air. Lewis went about his business despite suffering from cramps and brought up his 6th ODI half-century.

Lewis was abely supported by Nicolas Pooran, who took on the Indian spinners (minus Jadeja) from the outset. With the partnership assuming dangerous proportions, it took a one-handed stunner from Kohli at short cover to dismiss Lewis.

Nicolas Pooran and Roston Chase added another 40 runs for the fifth wicket but before they could harbor any hopes of taking the game deep, Bhuvneshwar Kumar's double strike in his comeback over ripped the heart out of the run-chase. First, it was Pooran, who in an attempt to heave Bhuvi over midwicket, could not get the ball past Kohli.

Then the match-defining moment: a one-handed stunner by Bhuvneshwar Kumar to dismiss Roston Chase, who in an attempt to work the ball on the on-side got completely squared-up, ballooning it to the left of Bhuvi. The Windies soon turned into self-destruction mode testified by Carlos Brathwaite's reckless heave off Jadeja.

Bhuvneshwar cleaned up Kemar Roach to pick up his 4th wicket, continuing his love affair with the Queens Park Oval. He could have got five had Nigel Llong adjudged what looked like a clear outside edge off Cottrell's bat. Eventually, Shami got rid of Cottrell courtesy a great running backward catch by Jadeja. The right-hander then inflicted the final nail in the hosts' coffin by pinning Thomas plumb in front of the wicket to help India register a 59 run win and take a 1-0 lead in the series.