There is something refreshingly addictive about the drive to prove your detractors wrong, isn't it? Like, when you've faced a setback and people start mocking you for not being "good enough" and you're like "Celebrate all you want people because soon I'll make you eat your words"
Of course, not many people have that attitude because when we're down and out, more than what people hurl at us, it is our demons that make it difficult for us to trust our ability.
The ability to detach yourself from the result (good or bad) and shut off the outside noise is what differentiates champions from mere mortals.
Over the last six months, KL Rahul has demonstrated that he isn't a mere mortal; he is special.
On Sunday, the stylish Indian opener smashed yet another tough hundred in obscure conditions - a place where his struggles in Tests started exactly three years ago, to once again assert his credentials as an all format batsman.
As he creamed Keshav Maharaj past point to bring up his 7th hundred (122* off 248 deliveries) in Test match cricket, my mind instantly wandered back to the 2014 Boxing Day Test. 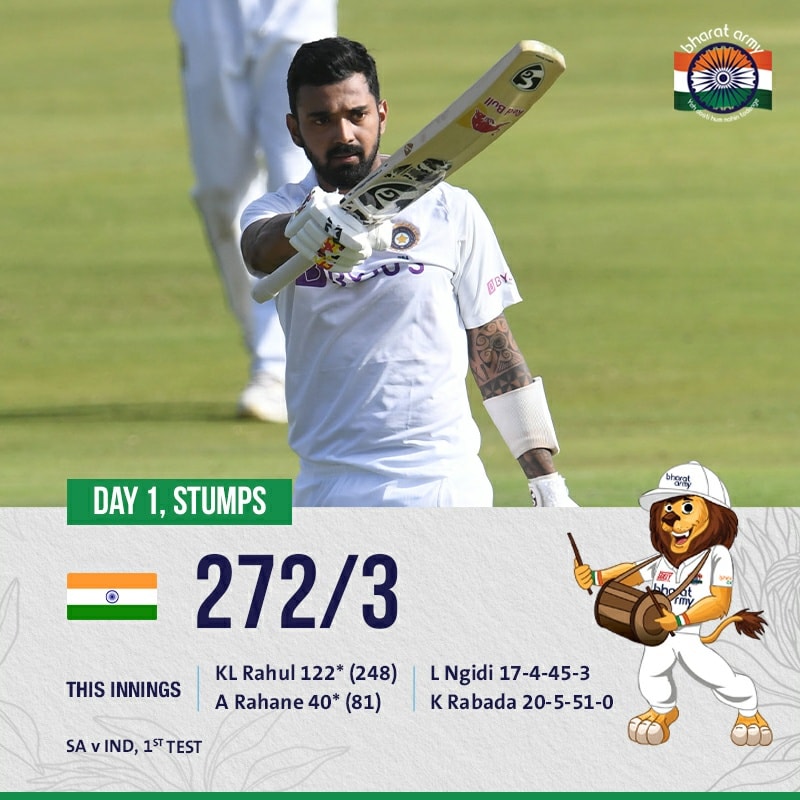 Boxing Day Tests haven't been kind to Rahul before this game in Centurion. He struggled to make an impact on his debut in Melbourne exactly 7 years ago, and then, three years ago, he lost his place to Mayank after a prolonged lean patch.
And, so, one could sense the calm and relief on his face as he removed his helmet and raised his bat to acknowledge the applause from his teammates.
And, one could understand where he was coming from. After all, this was a guy who was reduced to a meme due to his overseas struggles in the last cycle.
People labeled him a 'walking wicket' as pacers in South Africa, England and Australia kept breaching the gap between his bat and pad consistently.
Obituaries of his Test career were written and post his axing from the side after the 2019 West Indies tour, one felt that was THAT for Rahul in red-ball cricket.
Nevertheless, Rahul got injured without playing a game in Australia and it was only due to injuries to Shubman Gill and Mayank Agarwal that paved the way for his inclusion in the starting XI for the series opener in England.
I'll be the first one to admit here that I didn't think that Rahul would be successful in overseas Tests.
But, then, as they say, write off a champion at your peril. People like me didn't take that into account and six months down the line, Rahul has made each of us eat our words.
In many ways, Rahul knew that the lucky break he got in England was his last opportunity to nail Test cricket.
With so many openers waiting in the wings, he knew there was no scope for another failure. He had to seize the opportunity at any cost.
And, the challenge in front of him was pretty mind-boggling. To open in Test cricket in the current era is as tough a job as it can get. Add to the fact that he was against the likes of James Anderson, Stuart Broad, and Ollie Robinson in tailor-made conditions for seamers, and you'd realise the magnanimity of the challenge that he had to counter.
But, as they say, champions thrive in adversity. And that's because it gives them a chance to not only tick off another challenge but also to show to the world that no matter how difficult a situation it is, they'll find a way out of it.
And, that is exactly what Rahul did in England. He started the tour with a brilliantly compiled 84 in seaming conditions in Nottingham to help his team eke out a substantial lead.
The most striking aspect of his knock was the patience and discipline he exhibited outside the off-stump. He made another vital contribution in the second innings but unfortunately, it went in vain thanks to the rain.
However, Rahul wasn't done yet. He went one step ahead at the 'Home of Cricket' and smashed a hundred for the ages (129 off 250 balls) in seamer-friendly conditions to set up a historic win for Team India.
He eventually finished as the third-highest run-scorer of the series- 315 runs in 8 innings at 39.38- proving that he is here to stay.
In the absence of Rohit Sharma, Rahul had additional responsibility on his shoulders as India chose to bat in Centurion.
And, once again he rose to the occasion by showing remarkable composure and discipline coupled with his typical artistry, regularly converting a paintbrush masquerading as a cricket bat into a sledgehammer.
Only Virat Kohli has scored more (6 in 43 innings) Test hundreds in SENA than Rahul's 4 in just 32 innings.
And, given the way he is playing, it's only a matter of time before he adds a few more to his tally.
Rahul's 129 in Lord's and a 260-ball 123 in Centurion laid the cornerstone for two of India's all-time great overseas victories.
Six months ago, obituaries were being written about Rahul- the Test cricketer- and as the year comes to an end, he has not only immortalised himself in terms of being a stellar contributor to the heist of Lord's and Centurion, but he has also testified the age old saying and that is- "To have a comeback, you have to have a setback".
Rahul's redemption is a perfect example of that. Long may it continue.