Everything you need to know about IPL Auction 2021

The much-awaited auction of the Indian Premier League 2021 is all set to be held in Chennai. The 8 franchises will be looking to fill the gaps in their arsenal as 292 players, including 164 Indian, 125 overseas and 3 Associate go under the hammer at:

Just like the previous season, the total budget of the teams will be 85 crores. IPL 2020 concluded in early November and teams have had less time to reflect on their strategy and hence instead of a mega auction which was supposed to be held this year, the organisers have gone ahead with a ‘mini’ auction.

Among the released players, there are several high-profile players who have set their base price at 2 crores, which includes a couple of veteran Indian players, Harbhajan Singh and Kedar Jadhav. While among the overseas players, Glenn Maxwell, Shakib Al Hasan, Moeen Ali and Steve Smith among many others are also listed at the highest base price.

Here is a glance through what the 8 IPL teams have done leading up to the auction, and what we can expect from them in Chennai on Thursday: 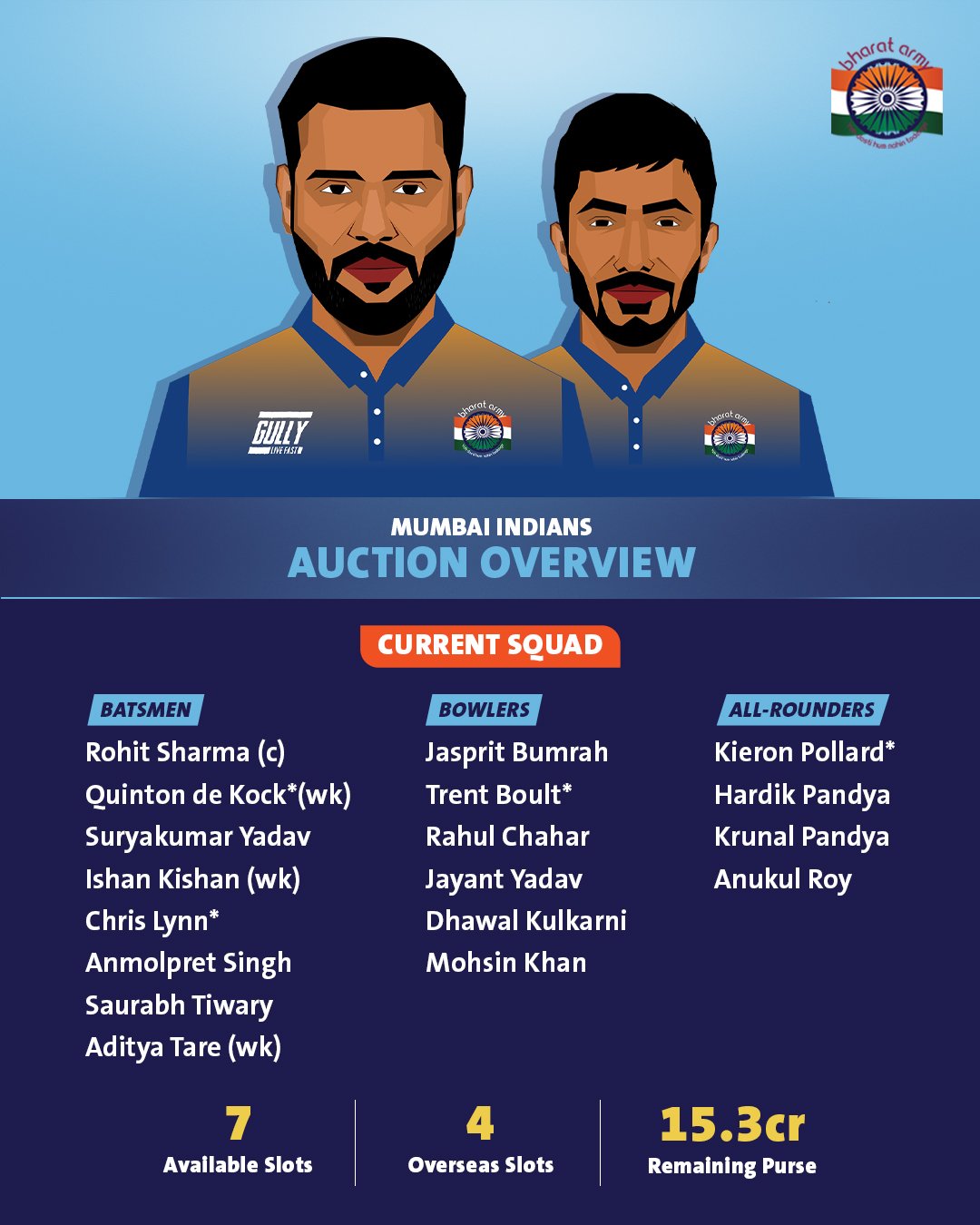 The defending champions have pretty much a well-settled squad but they do need a second overseas pacer, which will be their top target. The 5-time champions released Nathan Coulter-Nile, James Pattinson, Mitchell McClenaghan and with Lasith Malinga hanging up his boots, Trent Boult is the only foreign pacer in the ranks.

Other than that, MI have their playing XI covered. They don't have any major concerns but might go for a backup all-rounder.

The Delhi capitals haven't really tinkered ahead of the upcoming auction. The runners-up of the previous season have released Alex Carey, Sandeep Lamichhane, and traded out Harshal Patel and Daniel Sams to the Royal Challengers Bangalore.

The franchise will be sceptical about the participation of Kagiso Rabada and Anrich Nortje for the entirety of the tournament and hence they will be aiming to get a back-up overseas pacer as well as a keeper having released Alex Carey.

The Royal Challengers Bangalore have released 10 players and will be revamping their squad ahead of the 2021 IPL. They have roped in Harshal Patel and Daniel Sams as they needed to strengthen the two areas, all-rounders and overseas pacers. They will be aiming to get another top-quality death bowler and also a middle-order power-hitter to take the burden off De Villiers’ shoulders. 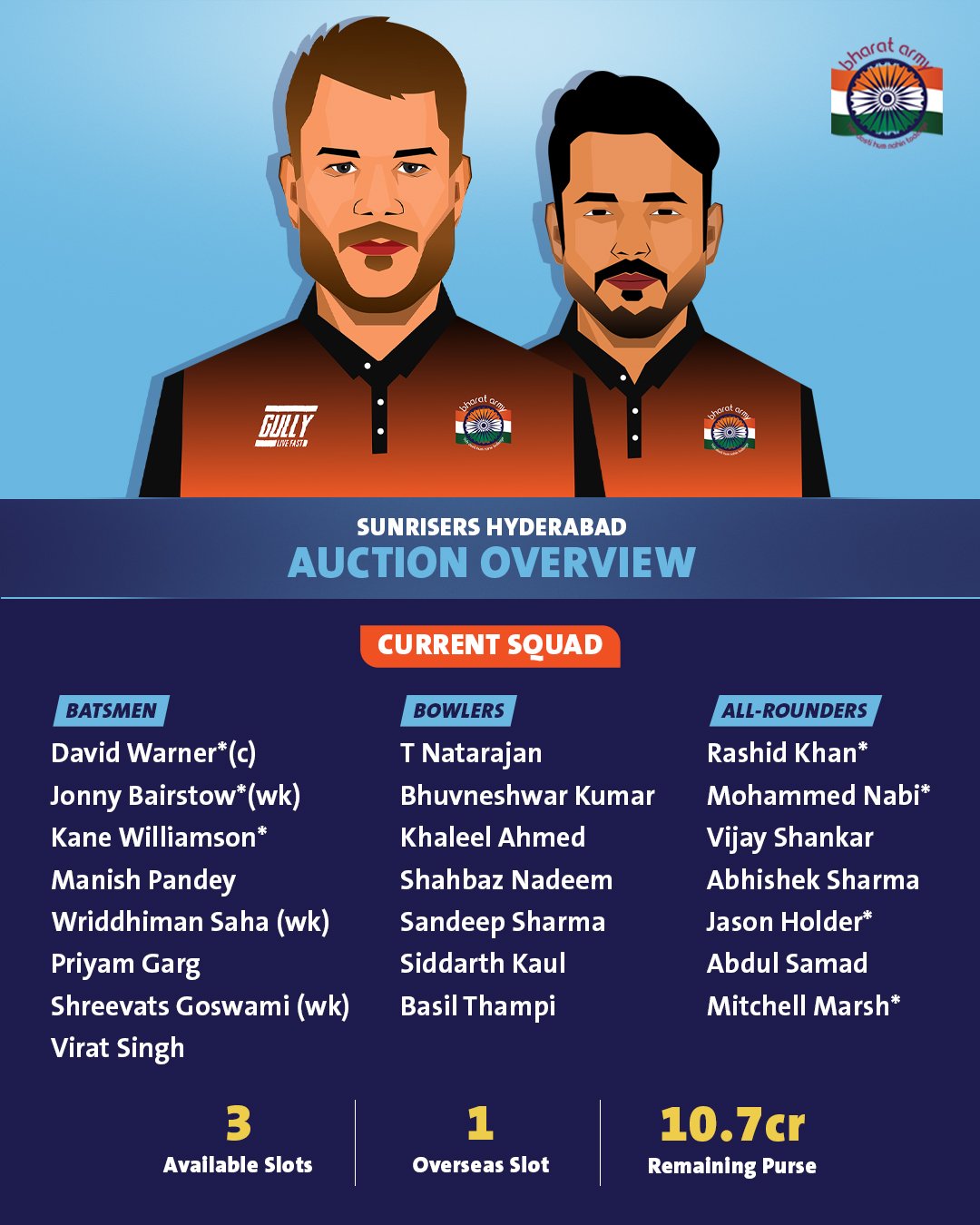 SRH already have a 22-man squad and they don't have many slots to fill as well. Again, they will be aiming to get a death bowler as they weren’t impressive in that phase and will be looking to get a pacer.

The Kolkata Knight Riders have the smallest purse available along with the Sunrisers Hyderabad but unlike the Orange Army, KKR have a few slots and areas where they need to strengthen their squad ahead of the upcoming edition. The team needs an opening batsman and their eyes will be someone who can accelerate in the powerplay with Shubman Gill playing the anchor’s role at the other end.

One team which has a chance to assemble the best squad at the end of the player auction is Punjab. The Kings already have a settled core with the likes of KL Rahul, Mayank Agarwal, Gayle, Pooran, Shami, Bishnoi in the ranks and with the highest purse of 53 crores, they might get their hands on few of the big players.

They need a strong underbelly having released Maxwell and might go for Shakib who provides an all-round alternative. The team might take a chance to bring in Moeen Ali as well as home boy Harbhajan Singh.

The 3-time champions have released some of their key players from the successful seasons of 2018 and 2019. Chawla, Harbhajan, Jadhav, Watson were the players released as the team will be looking to fill in the overseas spot with an all-rounder like Shakib, Moeen Ali or Glenn Maxwell as they provide a spin bowling option as well.

Rajasthan Royals made arguably the best decision when players were released as Steve Smith was let into the auction. It allowed the inaugural champions to free up their purse and allow a player which is better suited to the format. They can go after an Indian middle-order option as that will allow them to play another overseas player.