India hammered the West Indies 3-0 in the recently concluded series.
This was India’s 9th consecutive T20I win and their second consecutive whitewash of an opponent in the ongoing home season.
So, what are the key takeaways from the Rohit Sharma-led 3-0 triumph?
Here's a look:
Middle-order stepping up after top-order collapse in a run-chase
One of the most pleasing aspects of India's 3-0 whitewash of the West Indies was the performance of the middle-order batsmen like Suryakumar Yadav, Rishabh Pant and Venkatesh Iyer.
In all three games, especially the last two, India found themselves reeling after a top-order collapse but the likes of Surya, Pant, Venkatesh stepped up big time.
In the first game, the hosts were going along nicely in their pursuit of 158 before a mini-collapse reduced them to 4/114 from a seemingly comfortable position (1/92).
West Indies were threatening to make a comeback.
Enter Surya & Venkatesh!
The duo aced the run-chase like seasoned campaigners, ensuring that the asking run-rate never went beyond reach. SKY ended up with an unbeaten 18-ball 34 while Iyer racked up a breezy 13-ball 24* as India gunned down the target with 7 balls to spare.
One of the issues for Team India in T20 cricket over the years has been their inability to set-up totals. They have always been a gun chasing team but winning games after batting first has been an issue, especially when the top-order has collapsed.
So, it was extremely heartening to see the Men in Blue not only winning after batting first, but also the fact that those victories came despite the top-3 not contributing much, especially in the 3rd game.
In the 2nd match, Virat Kohli scored a brilliant 41-ball 52 after the opening duo of Rohit Sharma and Ishan Kishan fell cheaply. But, India were still in a huge spot of bother when Kohli fell in the 14th over. 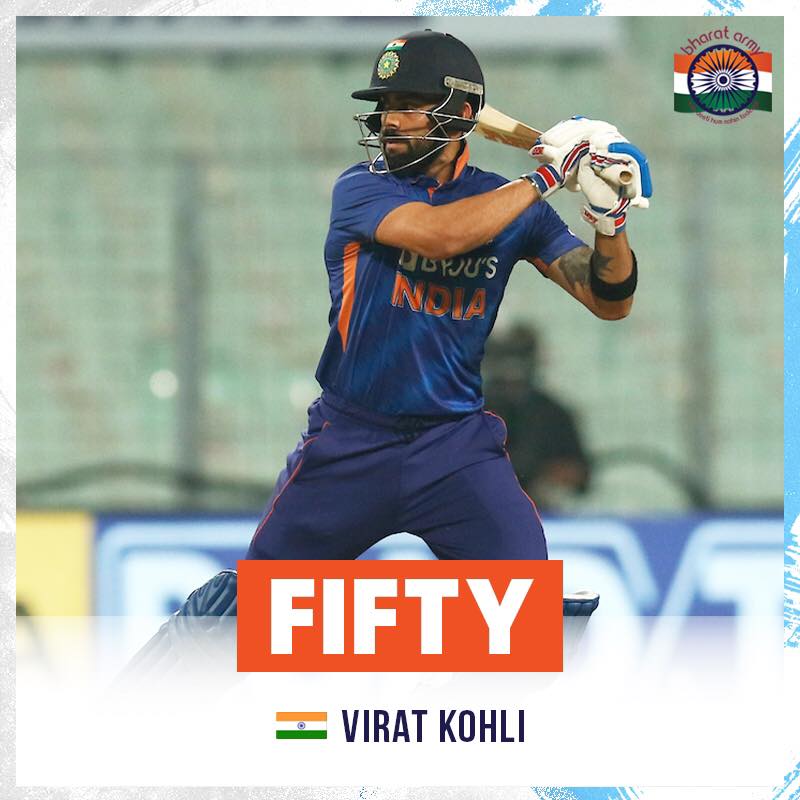 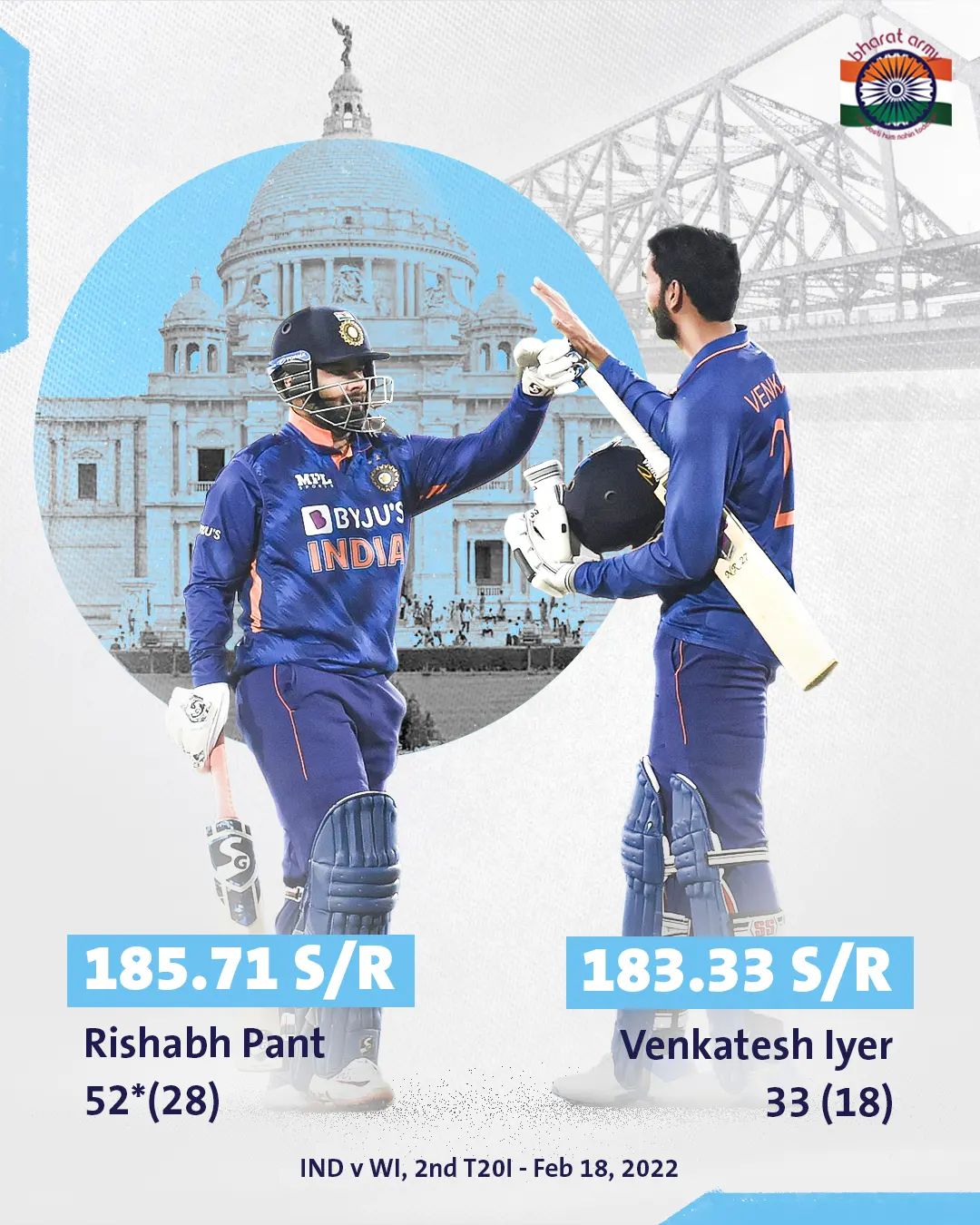 If it was Pant and Venkatesh in the second game, it was Suryakumar and the latter in the following fixture that helped India recover from another collapse.
While SKY smashed a nonchalant 31-ball 65, Venkatesh backed it up with another cameo of 35* off 19 deliveries as India posted 5/184 in 20, despite reeling at 4/93 after 14 overs. 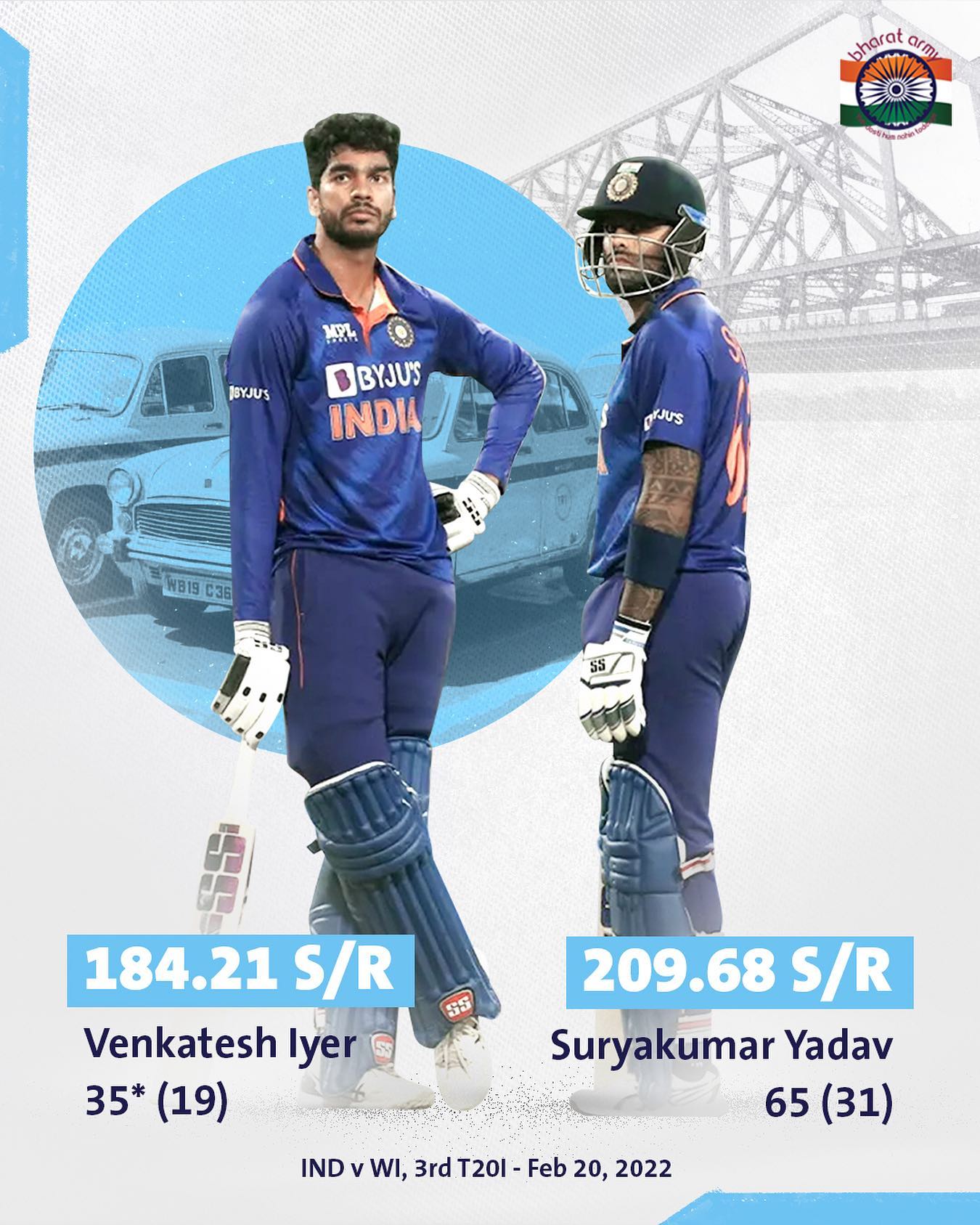 India won the game easily and the most heartening thing was that it was orchestrated by their inexperienced middle-order.
India’s search for a second leg-spinner after Yuzvendra Chahal may have ended with the emergence of Ravi Bishnoi in the recent series.
Bishnoi, a googly specialist, spun a web around the West Indian batsmen with absolute disdain in all three games to show everyone that he belongs to this level.
In his debut game, Bishnoi registered figures of 2/17 in four overs, which included the prized scalps of Roston Chase and Rovman Powell. 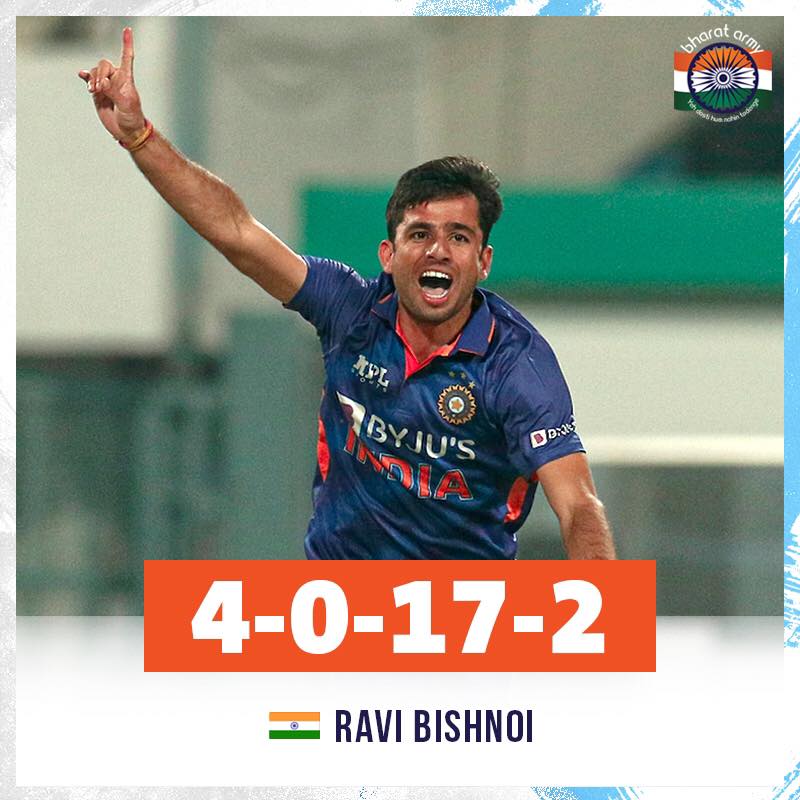 He backed it up with another good performance in the following fixture, registering respectable figures of 1/30 in four overs despite the onslaught of Nicholas Pooran and Rovman Powell.
The leggie could have easily dismissed both Romario Shepherd and Nicholas Pooran in the third game but for dropped catches.
He eventually finished with three wickets in as many games at an average of 25.3 and an economy rate of just 6.33 - the second-best of the series.
Harshal Patel showcasing nerves of steel at the death
Harshal Patel's slower delivery once again proved to be his major arsenal as the right-arm seamer continued to bamboozle the batsmen with his dip and deceptive change of pace.
Patel also showed incredible nerves of steel at the death, especially in the second game. After being smashed for consecutive sixes by Rovman Powell in the final over, the right-hander came under immense pressure as the equation suddenly got reduced to 11 off 2.
However, he backed himself to the hilt and executed a perfect slower delivery, that too with a wet ball, to seal the game for India.
In the third game as well, Patel bamboozled the dangerous-looking Rovman Powell, Romario Shepherd and Roston Chase during the middle-overs to finish with figures of 3/22 in 4. 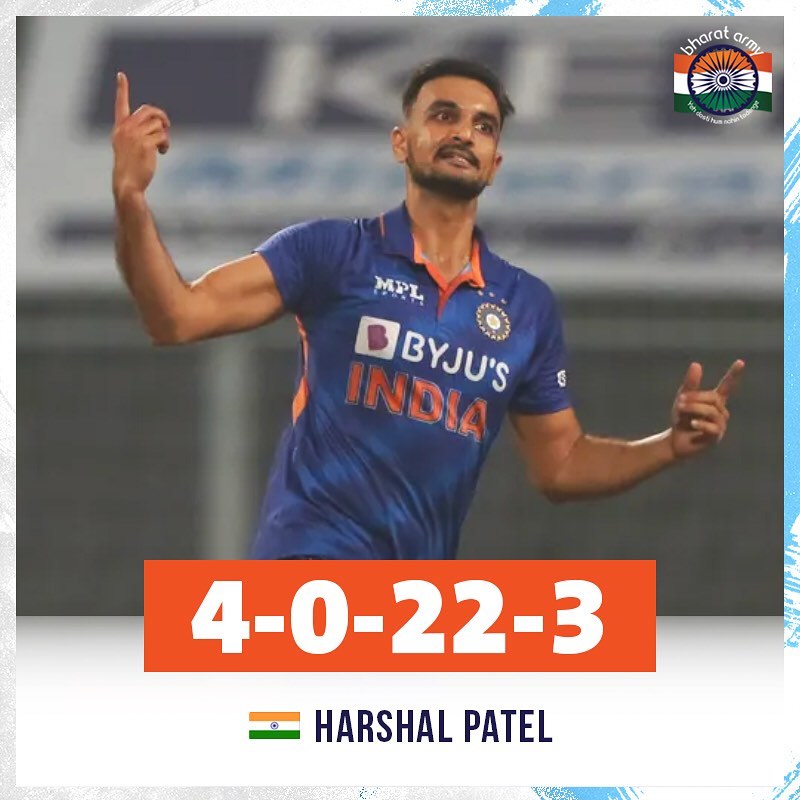 Overall, he claimed 5 wickets in 3 games to end up as India’s leading wicket-taker. With Bhuvneshwar on a decline, India are searching for a death bowler to partner Jasprit Bumrah.
Harshal Patel has made a huge claim for that coveted position in this series.
While his bowling is still a work in progress, Venkatesh Iyer showed real signs of developing into a match-winning all-rounder in the shorter format during this three-match rubber.
The southpaw, who is primarily an opening batsman, showcased versatility as well as brilliant temperament as he aced the pressure-situations in each of the three games.
In the first game, he scored 24*(13) to seal the run-chase, while in the second and third, the southpaw racked up scores of 33(18) and 35* (19) to help India recover from a dismal state and past 180+ totals. 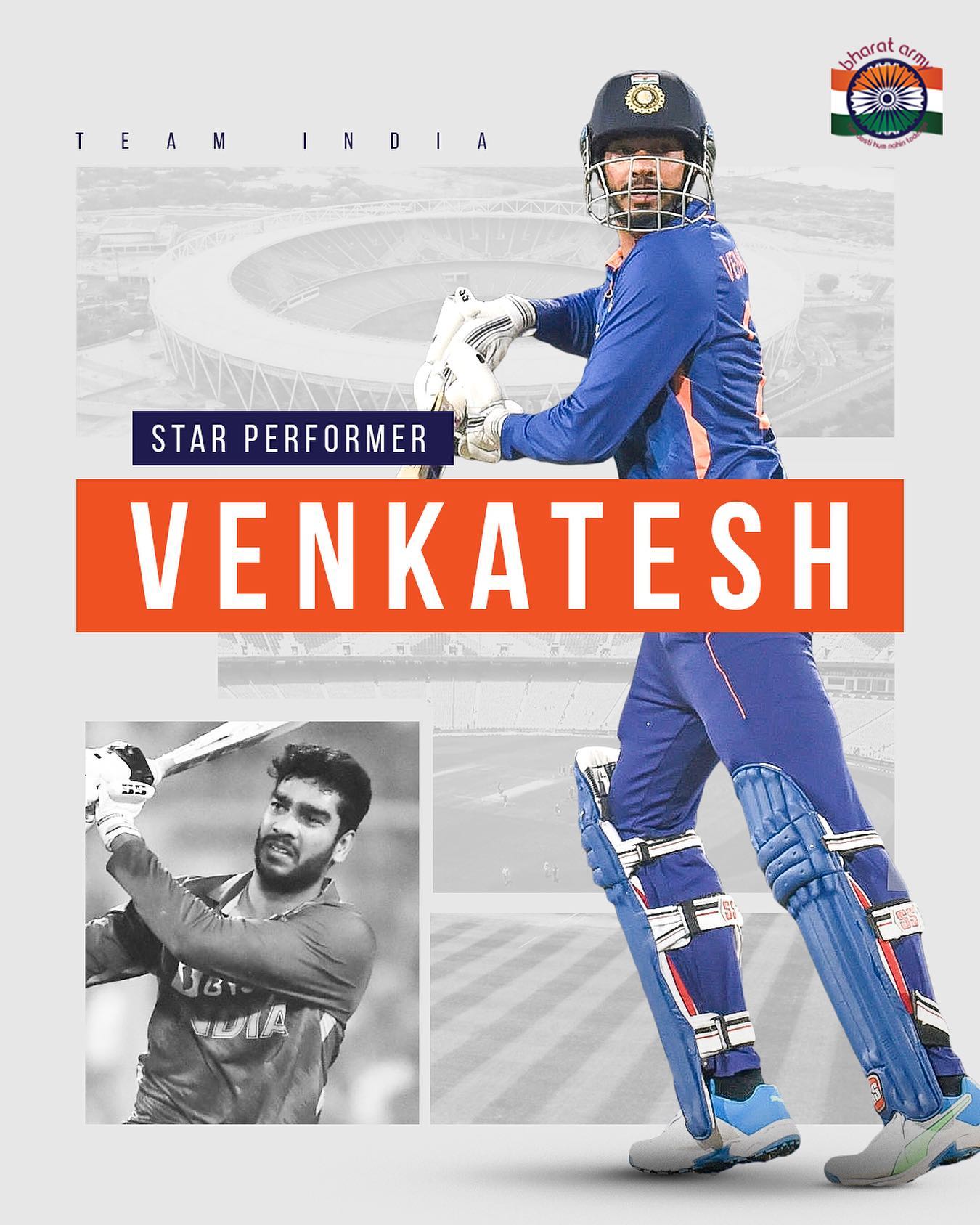 Besides this, he picked up prized scalps of Kieron Pollard and Jason Holder in the third game.
Ever since Hardik Pandya stopped bowling, India have been desperate for a seam-bowling all-rounder, who can do the finishing job with the bat besides chipping with 1-2 overs.
They may have just found one in Venkatesh Iyer.