India might be one of the leading contenders of the World Cup, and yes, the pitch that they encountered in the warm-up match against the Kiwis is unlikely to be replicated in the main tournament, but their appalling returns against the incisive seam and swing of Trent Boult and co, once again threw the spotlight on their inflated batting-unit. In the end, it was too easy for the BlackCaps as half-centuries from skipper Kane Williamson [67] and Ross Taylor [71] guided them to a comfortable six-wicket win over the Men in Blue.

So, what are the key takeaways from India's humbling loss at the Oval?

Top-order has no answer for Boult, again?

Rewind to a few months ago when Trent Boult was all over the Indian top-order with his incisive seam and swing bowling. India was shot out for 92 in one of the matches and was reduced to 4-18 in the next before Vijay Shankar and Ambati Rayudu resurrected the fledgling ship to save the team from another ignominy.

On Saturday, in conditions where the ball nipped around and had enough lateral movement to trouble the batters, Virat Kohli, with an objective of "You want to put yourself in tough situations in warm-up games", opted to bat first. It was a commendable decision on the part of Kohli and India to test themselves in difficult conditions, but six overs into the game, the decision seemed to have once again exposed the chinks in the top-order armor: inability to counter quality seam and swing bowling.

Trent Boult once again had the number of the top-order as the New Zealander used the lively conditions with aplomb to reduce the Men in Blue to 3-24 in under six overs. Rohit Sharma's struggles with the incoming delivery continued while Dhawan too was undone with the ball that nipped back in to take his inside edge. Incidentally, it was only Kohli who looked comfortable in countering the conditions and the skipper looked on course for a big inning before he misjudged a length delivery which nipped back in ever-so-slightly from de Grandhomme only to lose his off-stump.

Having not reached any consensus as to who will bat at the No.4 spot considering Vijay Shankar's injury, the first warm-up was a great opportunity for the likes of KL Rahul and Dinesh Karthik to put forward their case, and they couldn't have got a better situation than what they encountered on Saturday.

Rahul came into bat after India had lost both of their openers and were in desperate need for a partnership. But, the Karnataka batsman squandered his opportunity when he played onto his stumps while trying to cut Trent Boult for 6 to leave the Men in Blue reeling at 3-24.

Like Rahul, Dinesh Karthik too let his opportunity wither away after a  needless chip to fine-leg off the second ball of his innings brought about his downfall as Team India sank further to 6-81. With Vijay Shankar declared fit, it was an opportunity squandered by both Rahul [especially] and DK, and it will be interesting to see who will bat No.4 in the second warm-up game against Bangladesh.

Pandya makes an impact; Jadeja reminds us of his batting abilities

Hardik Pandya has been in good form with the bat during the IPL, and his subsequent promotion in the batting order was a reflection of the confidence that the team management has in the all-rounder. Pandya looked impressive at No.5, and despite struggling with the outswinger, rivaled Kohli's pristine cover-drives during his 30-ball 37. 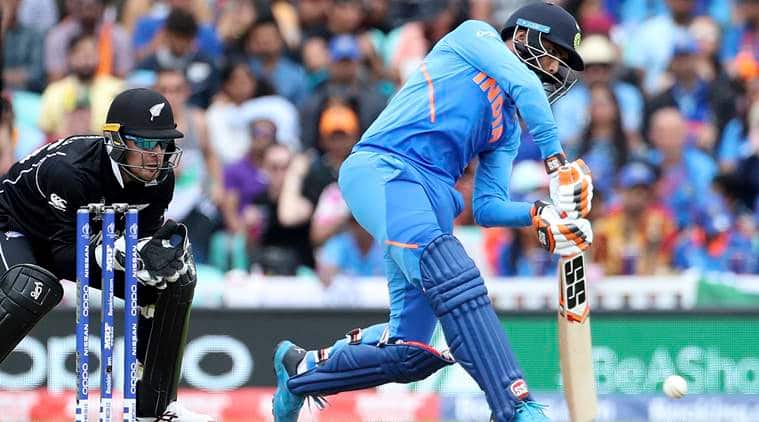 If Pandya looked good, Jadeja looked even better. There have been question-marks about Jadeja's spot in the playing-11 with Kedar Jadhav being the preferred choice behind Hardik Pandya and Vijay Shankar in the mix at No.4, it was hard to fathom how the left-hander could force his way in the starting 11.

Jadeja is ten years into International cricket and it is seldom that you see him bat with confidence. On Saturday, Jadeja played like a proper batsman and the most pleasing aspect of his batting was the way he rotated the strike and marshaled the tail. The left-hander, en-route to a pristine half-century calculated his assault by picking up the right bowlers. He laid into Mitchell Santner and Ish Sodhi and like Dhoni aimed to take the innings deep and it took a brilliant catch from Martin Guptill to end his vigil.

After the game, Jadeja said the message was to utilize the opportunity of batting out the remaining overs and he nearly succeeded. With the ball, Jadeja has the ability to be a wicket-taker with his unorthodox action while his fielding remains his biggest asset. With Jadhav not yet a hundred percent, Jadeja has one more opportunity- in the warm-up game against Bangladesh- to put forward his case with another strong performance and force the team management to ponder about his possible role in the playing 11, come June 5th.

Jasprit Bumrah once again displayed why he is one of the best bowlers going around. The right-hander gave away just two runs in the four overs that he bowled before nailing Colin Munro with an outstanding yorker. Mohammad Shami also looked in good rhythm during his four-over spell but it was the form of Bhuvneshwar Kumar [0-27 in 4 overs] and their wrist-spinners that would concern Kohli and the team-management the most.

While Bhuvi looked rusty in his initial spell with Martin Guptill going after him, Chahal and Kuldeep, in particular, weren't able to make any impact during the middle-overs. Both Williamson and Taylor laid into the wrist-spinners. Anything short was cut off the back foot while the fullish length was driven pristinely. The inability of the wrist spinners [1-81 in 14.1 overs] was the major reason why Ross Taylor and Kane Williamson were able to stitch a 114-run stand for the third wicket and ultimately guide their team home.