India emerged triumphant by a margin of 2-1 in the three-match long T20I series against the visiting Caribbean side. After a rather morale-dipping loss in Kerala, it was essential that Virat Kohli’s men set a positive note from the very start of this game to avoid any troubles thereafter and thus put the entire series on a thin line of sorts.

Here, we overlook the entire match in detail: 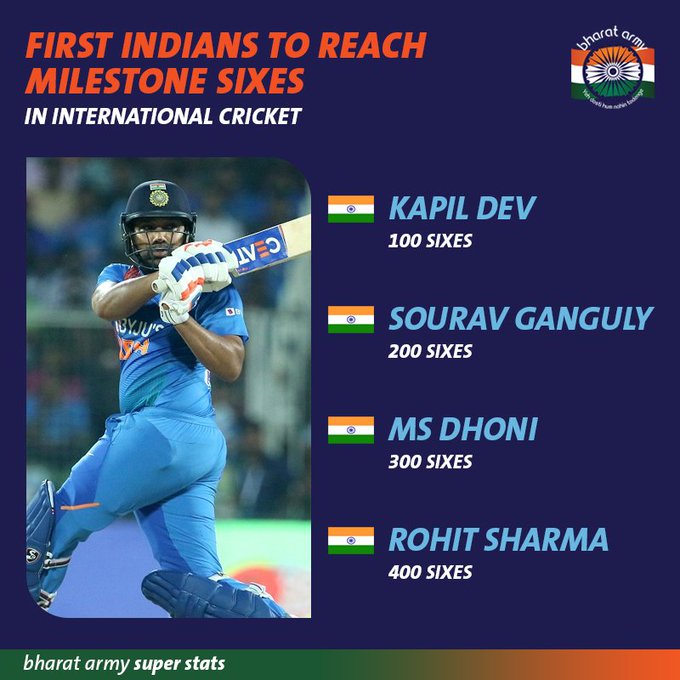 To put up a total whilst batting first has been a cause of concern for the Indian team since a pretty long time in the limited-overs version but they were able to break the shackles tonight and go completely berserk in their pursuit of comprehensively dismantling the morale of the West Indian bowling unit. KL Rahul and Rohit Sharma started off in astounding fashion as they bagged runs at 12 RPO in the first six overs. Later on, KL’s flawless stroke-play continued whilst the duo put up an opening stand of 135 runs in less than 12 overs.

Continuing their newfound norm of promoting a promising talent to play in one of the higher batting positions, Rishabh Pant was sent out to bat at number three ahead of Kohli. Whilst the experiment paid off with Shivam Dube getting a half-century batting at the same spot in the previous T20I, Pant failed to make the most of it as he departed for a duck and hence the captain had to arrive on the crease shortly afterward. Virat unleashed the sheer genius that encapsulates his skin like that of a cricketer and smoked away seven sixes in his fantastic knock of 70 runs in merely 29 deliveries. The Indians got to a total of 240 at the end of 20 overs with KL Rahul top-scoring with 91 runs to his name. 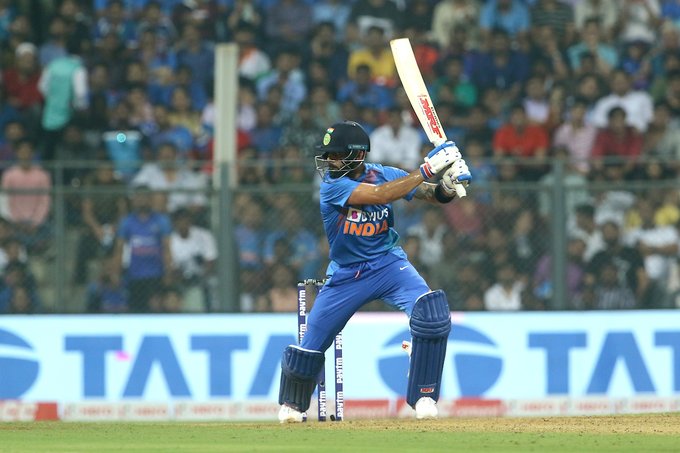 Chasing a target this steep was always going to be difficult for the Windies and a strong start from the Indian pacers helped the home side obtain a stronger hold over the proceedings quite early into the game. Deepak Chahar, who had a difficult few games before this one roared back into form as he bowled four overs, scalped two dismissals and conceded only 20 runs in return. 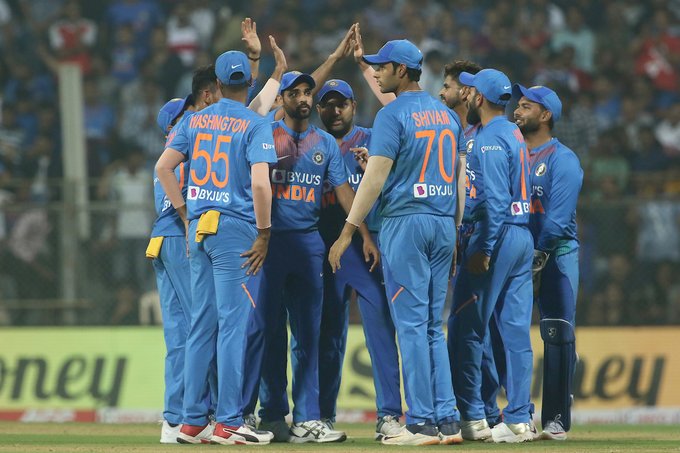 Bhuvneshwar Kumar and Mohammed Shami aided him well and the Indians struck three early wickets before Kieron Pollard tried to stick the batting order together by demonstrating his natural brute flair and the general understanding of the pitch at Wankhede. He took the bowlers to the cleaners and so did Shimron Hetmyer but just at the moment when the two of them looked in course to revive their chances in the game, they were sent back to the pavilion by a resilient Indian bowling unit. If the Indian batting was brilliantly free-flowing tonight, the bowling was effectively efficient too and didn’t panic even in the moments when the West Indies were scoring runs aplenty and at a good rate too. 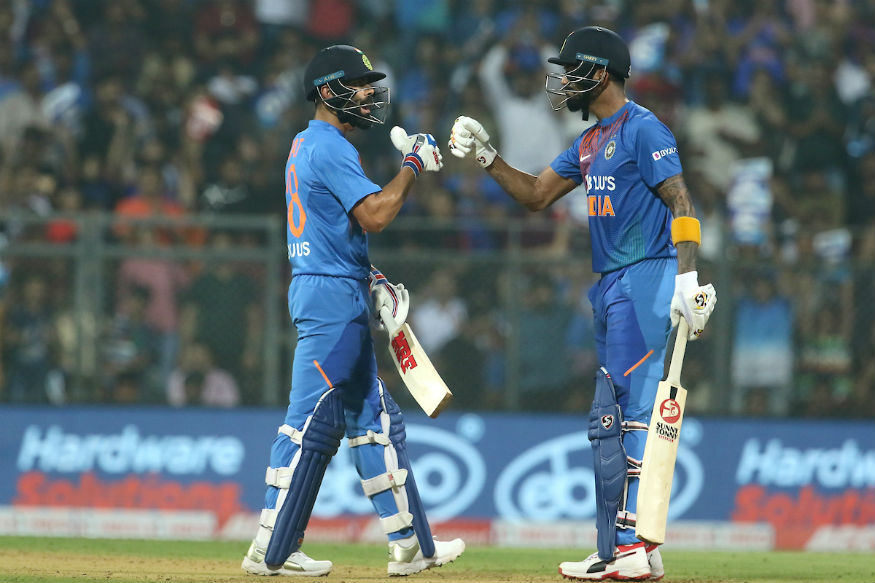 KL Rahul anchored the innings for Team India with a brilliant 91.Image: BCCI

Shikhar Dhawan’s injury ahead of this series opened up the gates for KL Rahul to cement his spot in the T20I spot after spending a long time in the sidelines. KL is someone who has always preferred to bat at the top and a pitch like the one at offer in the Wankhede generally suits him too as its fast-paced nature and generally shorter boundaries mean that stroke-making is more convenient here. He had already scored a century here in the previous season’s IPL against the Mumbai Indians and something of a similar sort were well on course to happen tonight if not for that fatal dismissal towards the end of his innings. He scored 91 runs including four sixes and nine boundaries in a span of 56 deliveries. KL’s timing with the willow was impeccable and so was his ability to maneuver the field with his deft hands. Moreover, his tendency to score sixes at a regular rate make him an all-round package when it comes to the shortest format of the game and hence it is necessary that he gets the deserved praise and applause for his performances in this series after having copped a lot of flak for his failures in Test matches in the past. 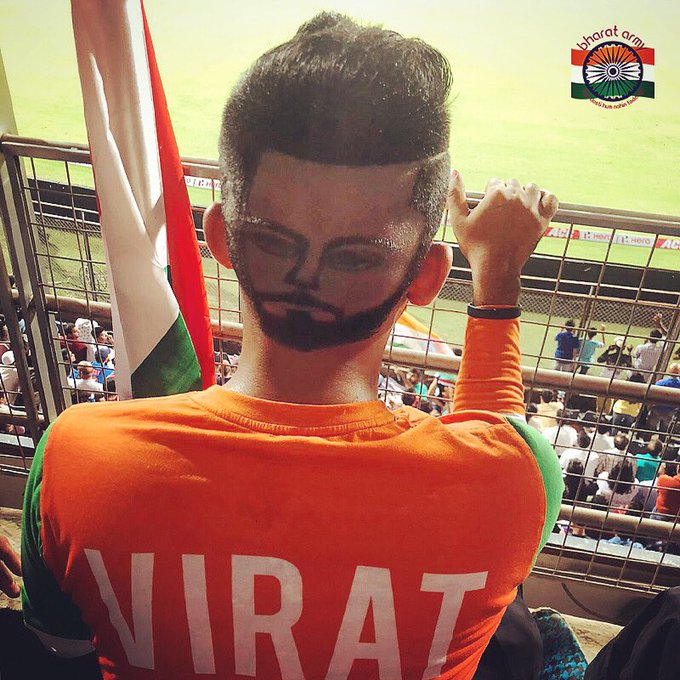 2. This is the first-ever T20 match when three players of a team crossed 70+ runs. (Stat Credit: @kaustats in Twitter)

Team India will now face the West Indies in the first ODI of the three-match series on the 15th of December in Chennai.