South Africa outperformed the Indian team quite comprehensively in the third and the final T20I at the M Chinnaswamy Stadium tonight. Virat Kohli called it right at the toss and opted to bat first, perhaps, in a move to put the long Indian batting order to test.

The Indian batsmen failed to present anything of mettle throughout the course of the 20 overs and eventually were restricted for a partly 134 runs. In return, Quinton de Kock led South Africa’s chase with aplomb as he stayed unbeaten and bagged 79 runs to ensure that his side claims a comfortable victory in the end. The Indian bowlers were listless, as they managed to scalp only a single wicket after 16 overs.

Rohit Sharma’s fragilities against left-arm pacers continued as he nicked one to first slip very early in the innings. Shikhar Dhawan geared up the innings with consecutive sixes off Tabraiz Shamsi but tried to loft one too many when he was dismissed caught inside the circle after his shot went way too high up in the sky. Virat Kohli’s innings didn’t last for long either as a classy looking flick was caught by Andile Phelukwayo at deep mid-wicket. The onus was then upon Rishabh Pant and Shreyas Iyer to steer the innings ahead to a good total.

However, Pant seemed to have succumbed in a shell before he tried to loft Bjorn Fortuin over long-off, and ended up mistiming one for the ball to safely land in David Miller’s palms. Iyer couldn’t make much merry out of the situation either, as danced down the track only for the bowler to pre-anticipate the move and sending the ball down the leg side for the wicket-keeper to complete a stump out. Hardik Pandya looked off-touch, he failed to judge the slower deliveries and despite a decent cameo from Ravindra Jadeja, none of the Indian batsmen were able to accelerate the flow of runs towards the fag end of the innings to ensure at least a respectable total on the scoreboard.

Team India failed to live up to their usual standards today. Image: BCCI

There is very little to be written about the South African innings, to be very honest. They were on command right from the start, with de Kock keeping hold at one end and playing his shots to perfection. The target was never going to be a trouble for the Proteas, nor was the track that was perfectly conducive to the batsmen. The Indian team bogged up a review at the start, which would have hardly overturned the umpire’s decision.

From thereon, the bowlers didn’t look penetrative enough to widen up cracks in their counterpart’s batting order. Sundar and Chahar were economical, a trait that might instill faith in the team management to continue with them at the start. However, Navdeep Saini leaked runs aplenty and so did the two Pandya brothers, who conceded 63 runs in the 5.5 overs that they bowled between them. Jadeja gave away only eight in the 12 deliveries that he bowled. The lack of a genuine wicket-taking spinning option in the middle overs came to haunt back the Indians, as there are matches like these where one would want the slower bowlers to notch scalps forcibly and not receive them deftly from the adversaries. Quinton de Kock was ably partnered by Reeza Hendricks and Temba Bavuma who scored 28 and 27 runs respectively.

Player of the Match

Firstly, Quinton de Kock deserves applause for the way he led the team from both behind the stumps and then with the willow in his hand as well. The southpaw was relentless with the bat, absolutely unperturbed with whatever the Indians threw at him and steered the innings to perfection. On the captaincy front, the bowling plans to each Indian batsman were specifically accurate, and de Kock definitely should be praised for the same. 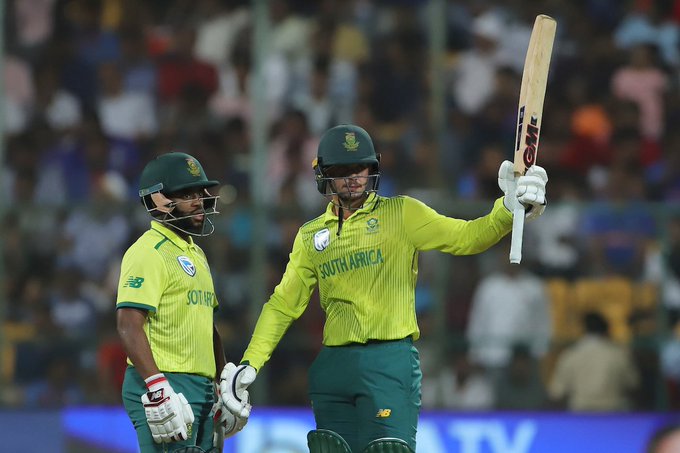 Tabraiz Shamsi delivered an excellent spell in the middle stages of the innings. He was smacked for two sixes early on but he slowed down the pace of the delivery and made it difficult for the batters to score off him with a persistent line that didn’t allow them much room to smoke the ball away to the boundary line.

Stat of the Day

Rohit Sharma has now become the most capped Indian cricketer in T20Is. It is a record that he jointly shares with MS Dhoni as both of them have played in 98 T20Is for the nation. Rohit was a part of the team that emerged victorious in the 2007 T20 World Cup and has been a regular inclusion in the side since then.

When do Team India play next?

The T20I series concludes here with a 1-1 draw. Both the captains shared the trophy at the end of the presentation ceremony. After around ten days of break, a wholly different squad will group up together to face the visiting Proteas in the three-match Test series. The first Test will commence from the 2nd of October at Visakhapatnam. The matches will be telecast from 9 AM IST.