India won their seventh Test match in a row as a victory against Bangladesh has taken their tally in the World Test Championship to 360 points now. Moreover, the sheer rampage that the side imposed upon the visiting Bangladeshi side meant that none of the Test matches went into the fourth day and the historical first ever D/N encounter was reduced to a dismal performance by Mahmadullah’s team. Nevertheless, going ahead in this review, we analyze and emphasize on the finer aspects of the match. 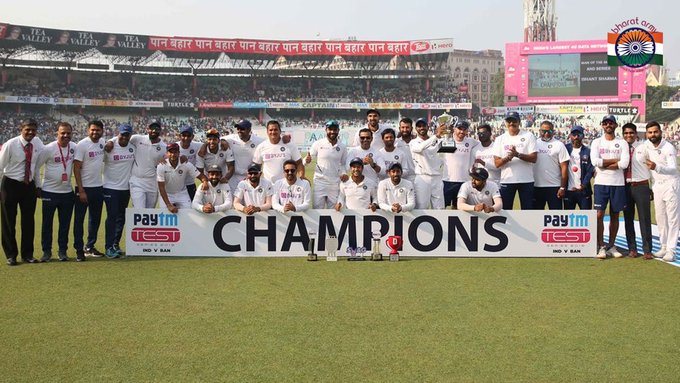 Team India with the Champions Trophy in the Eden Gardens. Image: BCCI 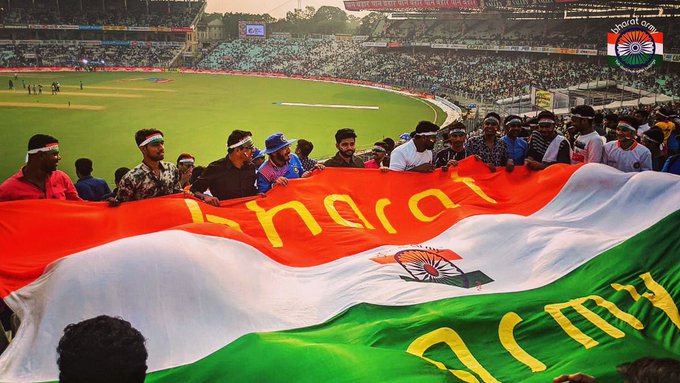 The Bharat Army heard loud and proud at the Eden Gardens.

Well the first day of the Test match was an absolute shocker for Bangladesh as they were bowled out in the first session itself with a stellar spell of bowling from Ishant Sharma right from the start. Such was the domination by the Indian pacers that premier spinner Ravichandran Ashwin did not have to bowl a single over in that entire session. Only Shadman Islam and Liton Das managed to stay at the crease for some period of the time whilst the others were coerced to become walking ducks by the Indian pace-bowling trio.

The core of Bangladesh’s batting order is constituted in the middle-order and they were absolutely rolled over by the brilliant incisiveness and incredible pace that the Indian pacers were able to generate. Das was subjected to a bouncer by Shami and hence after having received some treatment in the meanwhile, Mehidy Hasan was named as his concussion substitute. At some point of the innings, one could even see the Bangladeshi batsmen, especially from the lower-order being frightened by the expertise of skill that the Indian bowlers put on display, and that did not turn up to be a good viewing eventually. 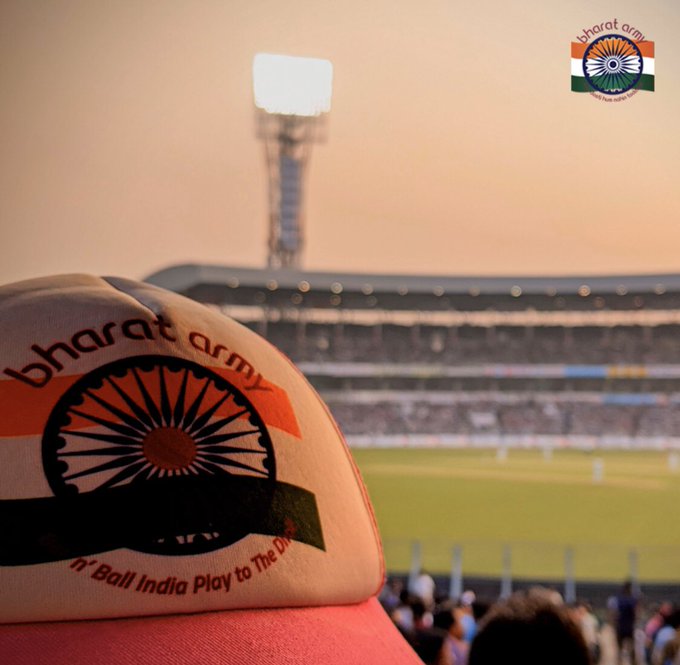 The pink ball did it a bit under the floodlights as one could witness visible movement and swing towards the second and third sessions of day one. Mayank Agarwal and Rohit Sharma failed to rack up the big scores but they saw off the difficult phase to an extent so that Virat Kohli could capitalize later on with a splendid century in the second innings.

It has become a norm for the skipper to normalize such exhilarating feats and the consistency with which he manages to do so is ethereal of sorts. Cheteshwar Pujara must be gutted to not have converted his half-century to a triple-figure mark whereas Ajinkya Rahane, too, scored a 60-ball-51 including seven boundaries to escalate the run rate later on in the innings. India declared at 347 runs, having gained a significant lead and plenty of time to bowl out Bangladesh to a partly total. 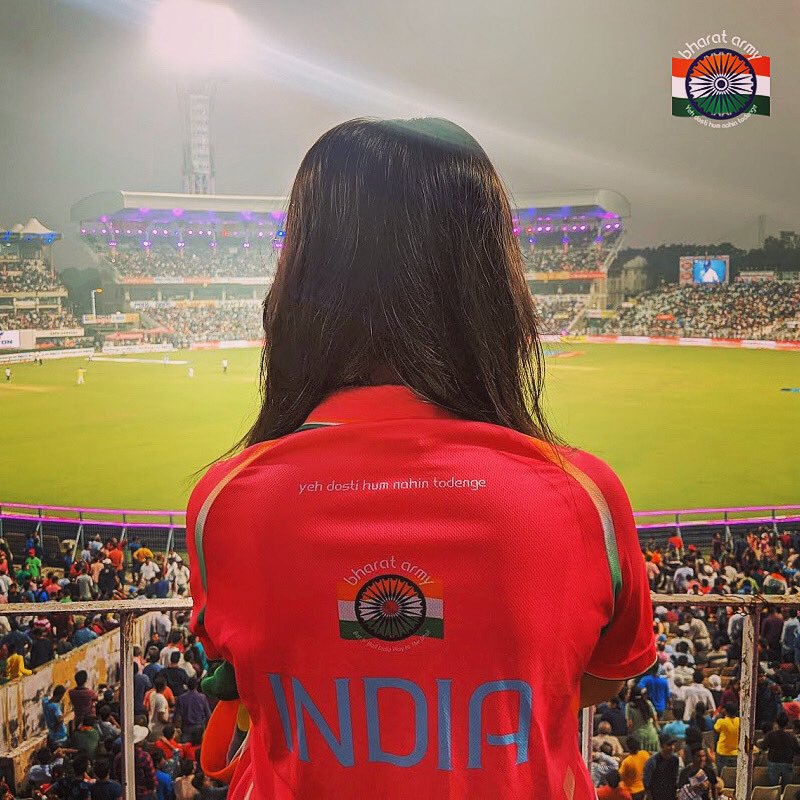 The glorious Pink Ball Test match was a hit amongst the Kolkata crowd.

Behind India’s total by 241 runs, Bangladesh resumed their second innings being put into the sidelines by a huge margin. However, Mushfiqur Rahim turned up well enough this time around with a crafty, and even a gritty knock of 74 runs in 96 deliveries that comprised of 13 boundaries. Their top order failed to deliver yet again whilst Mahmadullah was retired out and that way, the Indians had to strike only nine scalps to emerge victorious in the Test match.

The mastery of the pacers continued as this time it was Umesh Yadav who returned with a five-wicket haul and was instrumental in dismissing Rahim too, who had looked like he would elongate the course of Bangladesh’s innings. Ishant had drawn the first blood though by taking the wickets of the crucial top-order batsmen of Bangladesh. Their entire efforts in the second innings felt like a meager one despite a valiant display of batting by Mushfiqur nevertheless.

The venom that Umesh spewed through his bowling was enough to wipe off the Bangladeshi unit as in this way concluded an innings where the opposition was bowled over twice without the spin bowling duo claiming even a wicket!

Pick of the Game:

Virat Kohli’s remarkable century aside, it was Ishant Sharma’s consecutive spells of innate, consistent and wicket-taking bowling as he notched nine wickets in two innings and didn’t allow the Bangladeshi batsmen to gain any ground anyhow. Ishant was bang on with the length at which he delivered the ball and with some subtle seam movement and diligence, he managed to dismantle the Bangladeshi batting order. It is heartening to see him spearhead India’s pace-attack with such brilliant performances after years of struggle and discordant form behind him in the past.

Stats of the Match: 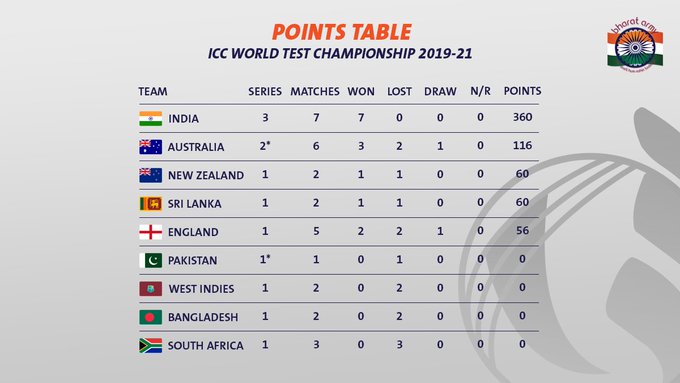 1. India has now become the first team to inflict four consecutive innings defeats upon the opposition team in Test matches. This includes the last two matches of the series against South Africa and this entire series against Bangladesh.

3. Mominul Haque, Mohammed Mithun, and Mushfiqur Rahim, who batted at the batting numbers 3, 4 and 5 respectively for Bangladesh, were all dismissed for ducks in their first innings.

A T20I and then ODI series awaits this Indian team in December as West Indies would be touring for the same and the first T20I would be played in Hyderabad on the 6th of December.