Champions Trophy 2013: A triumph for the ages

When we talk about the achievements of Indian cricket, three major triumphs: 1983 CWC, 2007 WT20 & off-course the 2011 World Cup, spring into mind instantaneously, and rightly so. Each of those victories played a substantial role in building the brand that Indian cricket is today. The 1983 World Cup win made the nation believe that they belong to the big stage besides inspiring a whole lot of ten-year-olds to take up cricket; 2007 WT20 win launched the IPL and also the Dhoni-era in Indian cricket; 2011? Well! that was a fairytale.

But one achievement of Team India that often slips under the radar and somehow does not get the same limelight that other triumphs get, is the 2013 Champions Trophy. On the 23rd of June, 2013, MS Dhoni became the first captain ever to win all three ICC trophies [WT20, CWC & Champions Trophy] when India defeated hosts England in a rain-marred encounter at Birmingham. And, did you see how MS Dhoni jumped in jubilation when Tradewell missed the last ball from Ashwin? That celebration from MS Dhoni was symbolic of what he and Indian cricket in general were going through at the time.

This is the story of India's 2013 Champions Trophy triumph; one that not only redeemed Indian cricket at the time but also laid the cornerstone for the juggernaut that the Indian ODI side is at the moment.

But before we delve into India's victorious campaign, it is important to understand the context in which the victory came. Dhoni had enjoyed a great four year period of leadership ever since he took up the role in 2007, leading the Men in Blue to their maiden World Twenty20 title and also to the summit of the ICC Test rankings, capping off a successful four year period with a historic World Cup win at home. This is where the honeymoon period ended. Post the 2011 World Cup win, India and Dhoni's fortunes took a dive down south across all formats of the game.

The team suffered successive 0-4 whitewash in England and Australia [2011] before going on to lose their first-ever Test series against the English on home soil in late 2012. In the ODI format too, India hit a rut post the World Cup win, reflecting that in a way, the World Cup victory was the end of an era for that generation of cricketers. Yuvraj Singh got diagnosed with a rare germ cell cancer, Zaheer Khan's body began to take a toll on him, Sachin Tendulkar was progressing towards retirement while the likes of Harbhajan Singh, Virender Sehwag, and Gautam Gambhir went off the boil with their form.

It surely reflected in the results that followed. The Men in Blue failed to qualify for the 2012 CB series, Asia Cup finals plus the bilateral ODI series at home against arch-rivals Pakistan, putting MS Dhoni's captaincy under extreme scrutiny. So much so, that the calls for Dhoni's head began to grow louder. If the dwindling fortunes of the Indian side were not enough, the 2013 IPL spot-fixing fiasco meant matters came to a head with Chennai Super Kings involvement in the scandal.

It is in this backdrop of his sides' dwindling fortunes and the cloud of spot-fixing hovering on his IPL franchise, that MS Dhoni took his Indian side into the Champions Trophy.

India went into the Champions Trophy without a set opening combination. Virender Sehwag and Gautam Gambhir had been dropped from all formats after an extended lean patch, and the Test incumbents in Murali Vijay and Shikhar Dhawan were included as the first choice openers. Shikhar Dhawan had made a successful return to the side after three years of wilderness from International cricket with a swashbuckling 187 on Test debut against Australia and his place as the opener was sealed despite mediocre returns in the warm-up games against Sri Lanka and Australia.

So, what about the second opener? This was the question that MS Dhoni had to answer leading into their tournament opener against South Africa. Also, what about Rohit Sharma? Especially after Dinesh Karthik had virtually sealed his place in the middle-order after scoring back-to-back tons in the warm-up fixtures.

This is where MSD pulled a rabbit out of his hat when he asked Rohit Sharma to open the innings alongside Dhawan, what is now hailed as a masterstroke. That decision not only turned Rohit Sharma's ODI career and India's tournament campaign on its head, it also gave them a formidable opening pair; one that has constantly pushed the envelope in the past six years besides laying the platform for many of Team India's victories today. Since Rohit started opening, no opener in the World has scored more runs or centuries [22] than the Indian, no one has hit more sixes. Hell! no one has ever scored more than one double hundred compared to Sharma's three during the same period and no opening pair has scored more runs than Shikhar and Rohit [4681 runs in 103 innings].

The road to the finals 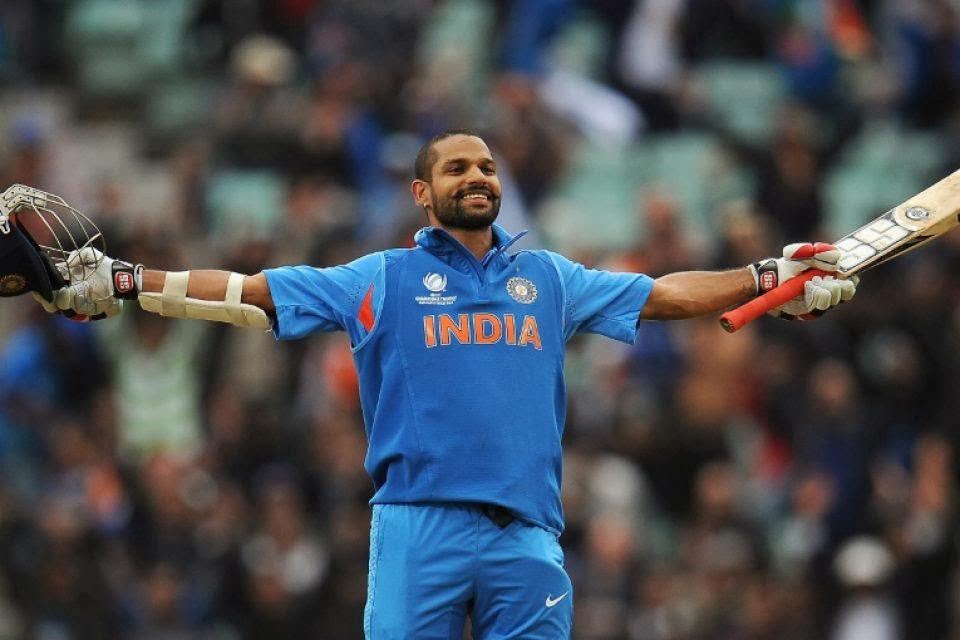 The signs looked ominous from the league stage itself. Shikhar Dhawan scored back-to-back hundreds against South Africa [114] and West Indies [102] as the new opening duo stiched consecutive hundred plus partnerships while Ravindra Jadeja bagged a five-wicket-haul [5-36] against the West Indies as India notched up victories by 26 runs and eight wickets consecutively to qualify for the semi-finals.

India's qualification to the semis meant their last game in the group stage against arch-rivals Pakistan was a dead-rubber. And, it turned to be a one-sided fixture as a disciplined all-round attack from their bowlers restricted Pakistan to 165 in 39.4 overs. India did not break a sweat in their run-chase as Shikhar Dhawan's 48 steered them to their first-ever win [by eight wickets] over their arch-rivals in Champions Trophy.

The semi-final against Sri Lanka turned out to be yet another damp squib as the bowlers once again set the game up for their batters by restricting the island nation to 8-181 after 50 overs. Shikhar Dhawan [68] notched up his third fifty-plus score of the tournament in four innings while Virat Kohli's unbeaten 58 set the ball rolling for India's entry into the finals of Champions Trophy for the first time since 2002.

The finale that nearly didn't happen 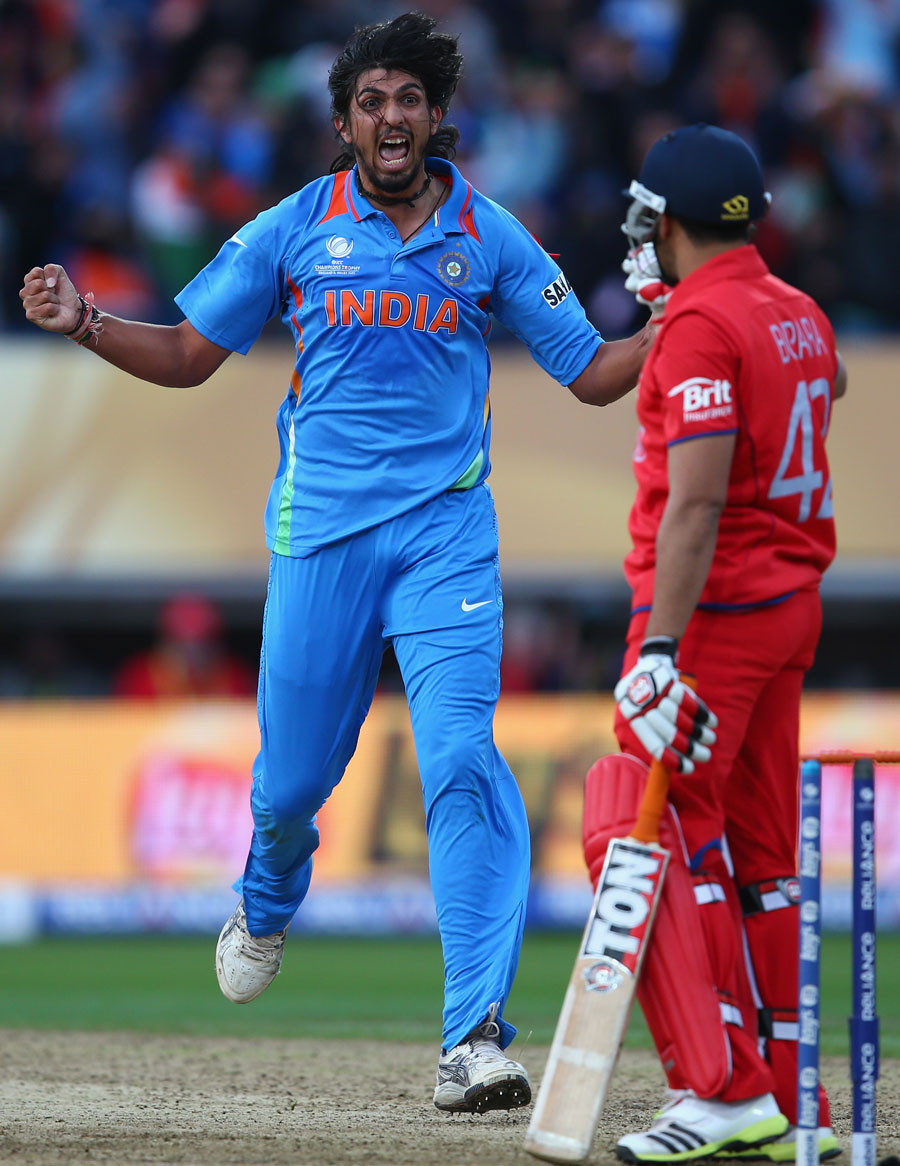 And, so the stage was set for an India vs England finale at the Edgbaston Cricket Ground. Or was it? As is the case in England, the rain had plans of its own, and it threatened to once again spoil India's party as it had done back in 2002 when both the finals as well as the reserve-day were washed out thanks to the rain. This time, we didn't even have the luxury of a reserve day after the ICC hadn't deemed it fit enough to have a reserve day for the finale of one of its marquee event.

It was only after the ICC had added 75 minutes to the rainy day that a 20-over final was possible for a 50-over event. India batted first and lost Rohit Sharma early for 9 but Dhawan carried on with his merry way, scoring a 24-ball 31 to help India breeze past fifty in the eighth over. But Ravi Bopara bowled a spell for the ages as he nipped out Dhawan [32], Raina [1] and Dhoni [0].

With the score reading at 5-68 and seven overs to go, Kohli [43] and Jadeja [33] launched a stunning counter-attack on the English bowlers. Kohli scored a 34-ball 43 while Jadeja scored an unbeaten 25-ball 33 including a six in the last over off Anderson to help India post a fighting total of 7-129. On a track which resembled more like Chepauk or Colombo than Edgbaston, India's spinners were always going to be the key in the run-chase, and Dhoni, off-course knew that.

Umesh Yadav got the Men in Blue their first scalp when he got Cook caught at slip for 2 while Jadeja [2-24] and Ashwin [2-15] knocked over Bell [13], Trott [20] and Root [7] respectively to reduce the hosts to 4-46 after 8.4 overs. Then came the fightback. Eoin Morgan [33] and Ravi Bopara [30] steadied Englands fledgling ship with a calm and collected 64-run stand for the fifth wicket. The duo targeted India's fast bowlers in Ishant [2-36] and Bhuvneshwar [0-19] with precision.

With two overs of spin left, Morgan targeted Ishant's final over, smoking him for a six off the second ball to reduce the equation down to 22 off 16 balls. The pressure was well and truly on Ishant. And, it showed with him bowling two consecutive wides to further wither down the equation to 20 off 16 balls. But as they say, the fear of winning is sometimes more than the fear of losing. And, it showed in the closing stages of the game.

With 20 required off 16 balls, Ishant rolled his fingers on the ball, Morgan tried to have it to mid-wicket bit could only go as far as Ashwin's hands at short mid-wicket. Ravi Bopara followed suit as he too picked out Ashwin while trying to nail the pull shot. The harakiri had started in the English camp and it accentuated to the hilt in the very next over as Jadeja knocked over Jos Buttler's stumps while Bresnan got himself run-out.

In the end, it all boiled down to six required off the last ball. Tradwell missed it, as did Dhoni but as Harsha Bhogle said on air 'Tredwell misses, Dhoni misses too, but it does not matter". What mattered was Dhoni's celebratory jump, one that was symbolic of a lot of things that were going on in Indian cricket at the time.