The Story of Priyam Garg

‘Since the ball was swinging, I deliberately stood out to negate the movement' – this was 15-year-old Priyam Garg’s answer when his coach asked him, why he was standing 2 or 3 yards outside the crease when facing Bhuvneshwar Kumar’s bowling? By the way, he met the ball with the full face of the bat..on the front foot. Visualize that for a 15-year old!

Priyam hails from a village called Quila Parikshitgarh, about 25km from Meerut.

With a family of 5 kids, his father had financial issues and managed the household by selling milk, delivering newspapers & ferrying children to and from school in a minivan. Priyam was always interested in sports but his father could not even afford a cricket kit, coaching was a distant dream! Looking at his dedication & love for the sport, Priyam’s dad decided to borrow money from his friend, bought a cricket kit and enrolled him for coaching at Victoria Park in Meerut under coach Sanjay Rastogi. 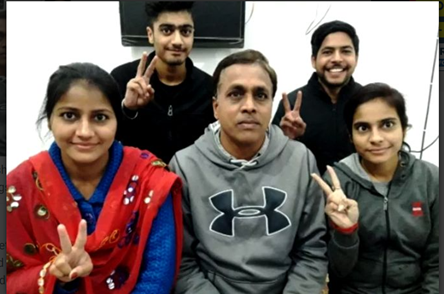 This is the same academy where fast bowlers Praveen Kumar and Bhuvneshwar Kumar had trained earlier, and this is the same coach who spotted Bhuvi’s talent. Obviously, the youngster wanted to be a fast bowler like them. However, his coach, Sanjay Rastogi spotted some magic in his batting and convinced him to focus on his batting.

Thinking of his routine, I imagined him carrying his kit and walking from his house to the academy, practising peacefully and returning home. This is far from the truth. The academy was in Meerut, 25 kms away from his house. Just to ensure he could attend the sessions, his dad enrolled him in a school in Meerut. Priyam and his dad used to cycle daily morning to Meerut where he used to attend school, play cricket after school and cycle all the way back to his village at night! Can you imagine doing that daily? Yes, but only if that is for something related to your passion and cricket was his passion. This is where I take my hat off for his father. As parents, we do a lot for our kids but not sure how many would do what his father did so that his son could live their dream, some day. Priyam could see his father struggling, hence, he dedicated himself to cricket and was determined to succeed.

Things don’t always go as planned. Tragedy struck when he lost his mother in 2011 at the age of 11. He even considered quitting cricket to help his family, but his father pushed him to continue for which Priyam will be forever grateful.

During tough times, we all have something to fall back on. That something was cricket for Priyank, at this difficult time. During the world cup, like all of us, he was glued to the TV. However, unlike us, he wasn’t watching the match in the comfort of his home, as they could not afford a TV back then. Hence, he caught all the riveting action on a 14-inch TV in a ‘paan shop’ near his home. His love for cricket just increased manifold after the world cup and along with that, his determination to do well also grew.

Rahul Dravid, the then India Under-19 coach, was intently watching Priyam’s batting at the KSCA Invitational tournament in Bengaluru in 2018, where he was the highest scorer.

He wasn’t even 18 years old and, on the 1st, November 2018, was fast-tracked to represent UP in the Ranji Trophy. Priyam is a part of a distinct list of a select few, who hit a century on debut! To add to it, he is the 2nd youngest player to score a hundred on debut!

That was just the beginning. In December that year, he amassed a double century against Tripura. He ended up on No.2 in the list of UP’s run getters with an average of ~68 and was also selected to represent UP at the 2018–19 Syed Mushtaq Ali Trophy, Duleep Trophy and Deodhar Trophy in 2019-2020.