IPL Week Three: Delhi Capitals coast along to the top!

Delhi Capitals was the most balanced squad coming into the Indian Premier League 2020, and they showed why with consistent performance from all the key players. A fine batting performance from their top order and a late flourish from Marcus Stoinis helped them put a total of 196 at the end of 20 overs. Stoinis was the highest scorer for Delhi Capitals with a quickfire half-century. Mohammed Siraj was the pick of bowlers for Royal Challengers Bangalore picking two wickets.

Royal Challengers Bangalore needed someone to play a long inning if they were to stand a chance to win the match. It did not go as per the plan as Virat Kohli was the only player to cross the 20 run mark. He was the top scorer for RCB with a well made 43 but lacked support from the other end. Kagiso Rabada was at his best picking 4 wickets to restrict RCB to 137.

A comprehensive victory for Delhi Capitals and they look like one of the favourites for this year.

The defending champions of IPL T20 were back to their championship mentality! Mumbai Indians openers Rohit Sharma and de Kock gave them a decent start which was capitalised by Suryakumar Yadav, who made an eye-catching 79 runs which was also the highest score of the innings. Hardik Pandya’s late cameo helped Mumbai Indians reach 193 after the end of 20 overs. Shreyas Gopal was the pick of bowlers for Rajasthan Royals taking 2 wickets.

The start for Rajasthan Royals couldn’t have been any worse as they lost most of their top order in quick succession with little score on the board. Jos Buttler was the lone warrior for the Royals as he threatened to take the match away with a well made 70. He, however, failed to get any support from the other end and RR eventually were bundled out for 136. Jasprit Bumrah was back to his best picking 4 wickets to dismantle RR and secure two points for MI.

Kolkata Knight Riders needed a change in their batting line-up as Sunil Narine up top wasn’t working. As such, Rahul Tripathi was promoted up the order and he repaid the faith shown in him with a brilliantly made 81. All the other KKR batsman got starts but were unable to capitalize and take advantage of those starts. In the end, KKR ended up with 167 runs. Most of the bowlers chipped in with wickets for CSK but it was Dwayne Bravo who picked three wickets to lead from the front in the bowling attack.

CSK were once again guilty of leaving it too little and too late as they have for quite a few matches this year. Shane Watson departed after making a well-made half-century and CSK were well in control until that moment. A brilliant bowling effort from KKR bowlers combined with the CSK batting order unable to break shackles resulted in a 10 run victory for KKR. The result was down to a team effort by bowlers to bring their team back in the match from a losing position to get two crucial points in IPL 2020.

The destructive duo of Jonny Bairstow and the southpaw David Warner wreaked havoc as they put up 160 for the opening stand! Warner departed for a well-made half-century while Bairstow was dismissed on 97 runs, missing out on a much deserved century. The KXIP bowlers did well after taking the first wicket to keep the total to 201. The U-19 Indian leg-Spinner Ravi Bishnoi was the pick of the bowlers with three wickets.

For KXIP, their opening pair has been in red hot form but they failed to deliver as both skipper KL Rahul and Mayank Agarwal couldn’t score big. Nicholas Pooran played a binder scoring 77 runs in a short time to give KXIP fans hope and something to cheer about, but they were all gone with his dismissal by Rashid Khan. The other batsman failed to impress as KXIP were bundled out for 132. Rashid Khan picked up 3 crucial wickets to continue his fine form in IPL 2020.

The defeat left KXIP at the bottom of the IPL standings with just 2 points.

With their red hot form and a balanced squad, DC has been the team to beat during the IPL 2020 and they once again proved why that is the case. Batting first at the Sharjah DC put up a total of 184 on the board. A decent batting effort from the middle order and a late surge helped them get to a respectable total on a ground which has been a paradise for the batsman. The RR bowling was lead from the front by the spearhead Jofra Archer who bowled consistently at 150 km/h and picked up 3 wickets.

It wasn’t a big total to chase considering the previous results on the ground but the brilliant effort from the DC bowlers and some average batting from Rajasthan Royals resulted in yet another defeat for RR who could only manage to score 138 losing all of their wickets. All of the DC bowlers bagged wickets with Kagiso Rabada taking three wickets to take his tally to 15 wickets in the IPL 2020. 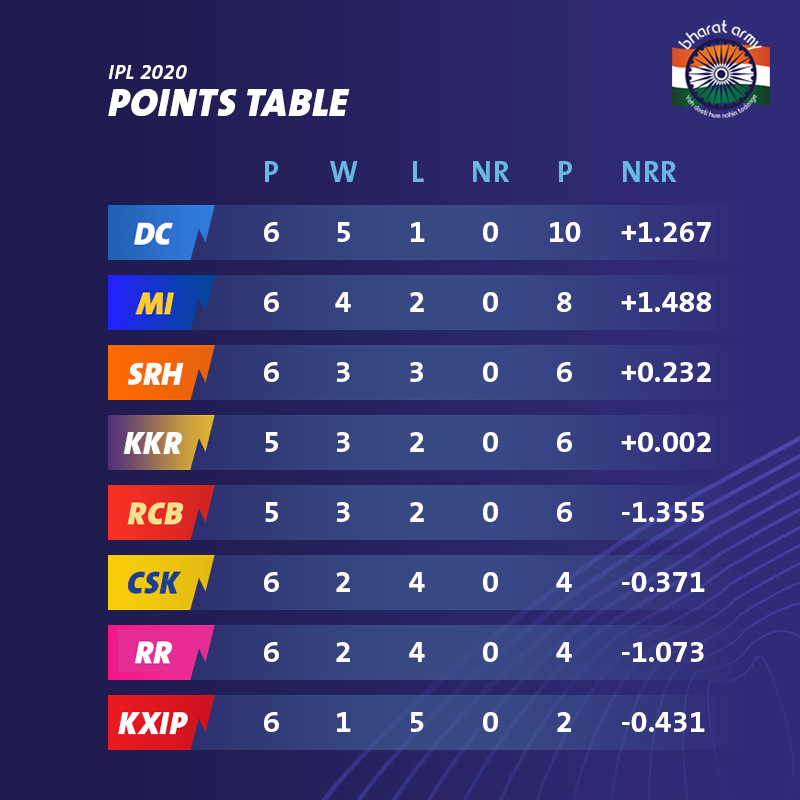