The Battle of Champions: Colossal Chaos

The Battle of Champions: India vs Australia 1st Test at Adelaide Oval

Day 3 is often called the moving day in Test cricket. If anything, the day did move at the rapid pace at the Adelaide Oval on Saturday.

When India restarted from their overnight score of 9/1, a target of 250 for the Aussies seemed like a bare minimum. But an apocalyptic collapse followed over the course of the first hour of the play as India were dismissed for a paltry score of 36 as Australia won their 8th consecutive day-night test and kept their cent per cent record in the pink-ball cricket intact.

Captain Virat Kohli did sum up the emotions post the nightmarish batting display in a simple way, “It hurts!” No matter the ups or the downs, the Bharat Army was present at the Adelaide Oval supporting Indian Cricket Team as their 12th man, and, we review the top moments that changed the course of the game, the epic battles and the BA Story in Numbers in this unforgettable match:

The Border-Gavaskar series between India and Australia is a battle of the heavyweights and there were several moments in the game which defined the eventual outcomes of this fascinating result. The men in blue won the toss and opted to bat first as they followed the template that has won them test matches in the recent past in overseas conditions. Here are the moments that changed the course of the game:

At 188/3 on Day 1, India was in pole position to get the early advantage in the first test of the Border-Gavaskar trophy as skipper Kohli looked all set to get a first innings century, his first in international cricket in 2020.

But a horrid call from Ajinkya Rahane led to a mix-up between India’s captain and his deputy as Kohli was run-out for 74. The last 7 wickets fell for just the addition of another 56 runs as Australia restricted India to 244 in the first pink ball test.

2. A day of drop catches and India’s lower-order Paine

On day 2, India was hardly giving breathing space to the Aussie batsmen and it was a repeat show from the 2018-19 India’s tour of Australia. At 79-5 for Australia looked all set to concede a lead of over a 100 runs but the tail continued to haunt India as the last 5 wickets added 112 runs.

Australian captain Tim Paine led the fightback as he scored a resilient and unbeaten knock of 73. In the field, India dropped 6 catches, including 3 of Marnus Labuschagne, who went on to score a 47 but was dropped at crucial junctures in his innings.

“Catches win matches”, did hold true in the 1st test as the story might have been different if the fielders had held on to the catches.

If Kohli’s wicket led to the start of a collapse in the 1st innings, on day 3, it felt that even a pack of cards would collapse slower than the Indian batsman. The wickets fell like a package of highlights as Josh Hazlewood and Pat Cummins followed the template of good length deliveries, pitched outside off in the corridor of uncertainty, and the batsman defended it only to find the outside edge of the bat, nicking their wicket to the keeper or in the slips corridor.

Mohammad Shami injured his right hand and was ruled out of the series as India were 36-9 as the pacer was retired hurt. India had been dismissed for the lowest score in their glorious history of 87 years and the crowd, including the Bharat Army, couldn't believe what had just unfolded. 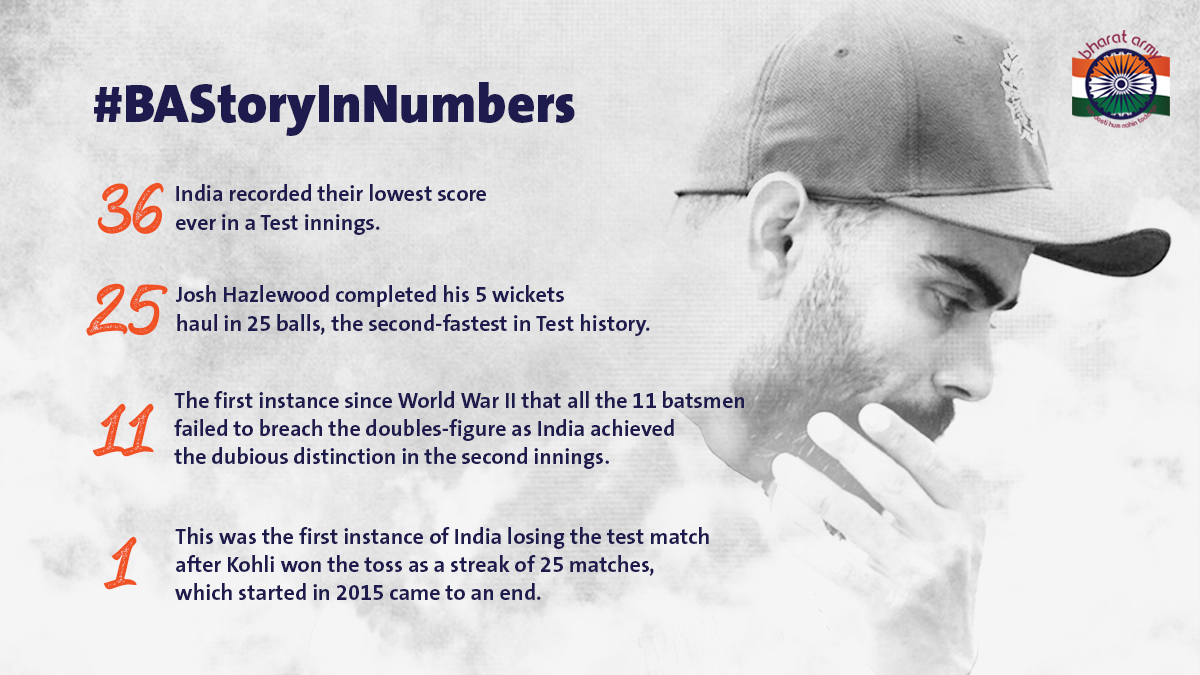 36 India recorded their lowest score ever in a Test innings.

25 Josh Hazelwood completed his 5 wickets haul in 25 balls, the second-fastest in test history.

11 The first instance since World War II that all the 11 batsmen failed to breach the doubles-figure as India achieved the dubious distinction in the second innings.

1 This was the first instance of India losing the test match after Kohli won the toss as a streak of 25 matches, which started in 2015 came to an end.

Although the Indian cricket team is 1 match down in the Border-Gavaskar series, the Bharat Army is hopeful for a comeback and we will be present at the Boxing day test to support and cheer for our beloved team. With Virat leaving India for paternity leave, the rest of the batsmen will need to show intent and deliver their best performances and expect nothing less from Cheteshwar Pujara, Ajinkya Rahane and the troop.