IPL 2020: History made as cricket fans across the globe watch double Super over!

If the week 4 of IPL 2020 was eventful for the Bharat cricket fans, then the IPL Weekend 4 was historic! One could argue that Mumbai Indians vs Kings Xi Punjab was one of the best IPL matches since the dawn of the Indian Premier League in 2008. History was created as for the first time a match involved double Super over. This match which wasn’t for the faint-hearted! Both teams had the chance to win, but eventually, it all came down to two Super Overs to finally separate them. Read on as we cap off a Super IPL Weekend-

Going into the match, RR was struggling to find the perfect balance for their team halfway through the IPL 2020. Batting first, they opted yet again for a new opening pair with Robin Uthappa and Ben Stokes to start the proceedings.

Uthappa was back to the spot where he has been the most successful and was quick to find form as he played a fluent innings which would do him a world of good for his confidence going into future IPL matches. Ben Stokes couldn’t get going and it remains to be seen for how long RR continue using him at the top with the likes of Jos Buttler much more suited up top.

One area of concern for RR has been the form of Captain Steve Smith. In previous matches, he has been guilty of throwing away his wicket much to the irritation of RR fans who know how good a player he is. But as they say “Form is temporary, the class is permanent”. He was back to his best with a well-made half-century to put an above par score on a pitch that was slowing down as the game went on.

Chris Morris once again proved why he is the main guy to provide that much-needed balance to the team. He stepped up to take four wickets and bowled excellently at the death.

RCB needed their star players to play brilliantly if they were to stand a chance of chasing down this target. The star players did not disappoint either. Youngster Devdutt Padikkal and Captain Virat Kohli came together to stitch up a partnership before wickets on consecutive balls seemed to derail RCB.

What followed after that was a treat to watch, not so much for the RR fans though. It seemed as though RR would easily win the match from the position they were in but AB de Villiers had some other ideas.

He once again proved why he is considered one of the best in IPL T20 with a scintillating knock which left everyone admiring him even more. His 22 ball 55* was the reason RCB were able to get out of the jail to register another victory and stay in the top half of the IPL Standings.

Captain Steve Smith has some thinking to do as he missed the trick by not giving the penultimate over (19th) to his star bowler Jofra Archer. A decision which left many people confused and one which eventually cost them the match and two points.

The year 2020 has been a strange one, as has been the consistency of CSK this year. The most consistent team in IPL history has struggled to find their rhythm. It was an important game for CSK as a win would have put them closer to the IPL playoff spots but a loss would mean they have to win most of their remaining matches. DC, on the other hand, has been in great form sitting in the top half of the table.

CSK were dealt an early blow but the quality and the experience the side possess meant they were able to recover. A couple of decent partnerships and they were in a good position to put up a decent total on the board. The form of skipper MS Dhoni has been a concern as he has struggled to get going and score some big runs. Over the years, Dhoni has played an instrumental role in getting CSK in formidable positions.

Ravindra Jadeja was crucial as he added the finishing touches to the innings with some late fireworks to get CSK to a decent total on a small Sharjah ground. The pick of the bowlers for DC was their pace spearhead Anrich Nortje who took two wickets. The rise of Nortje has been very helpful for DC this season and one of the reasons why they are in the top half of the IPL table.

Chasing a target of 180, DC needed someone to play a big inning if they were to win the match and go on the top of the table. After losing Prithvi Shaw in the very first over, DC would be concerned with his recent form after a great start to the tournament.

Shikhar Dhawan continued his return to form as he played an innings of his life to score his first-ever IPL Century. The knock included some stunning shots as he remained not out to take DC to the top of the table. The victory, however, wasn’t without some last over drama. Axar Patel smashed left-arm spinner Jadeja for three huge sixes to complete an impressive performance for the Delhi Capitals.

Dhawan once again reminded everyone why he is a regular in Indian Cricket Team as he stepped up when his team needed him the most.

The decision by MS Dhoni to hand the last over to Jadeja was also questioned by many with two left-handers at the crease. CSK doesn’t look like the team they have been over the years and a lot needs to change if they hope to qualify for the playoffs this year.

A crucial match for both the teams as a win was likely to push the winning team into the top 4 for an IPL Playoff spot. KKR were revitalized before the match with news of star spinner Sunil Narine being cleared for his bowling action, however, KKR decided to not rush him into the team but gave the chance to Lockie Ferguson. The kiwi pacer proved to be the game-changer for KKR eventually.

Batting first, KKR batsmen got a start but no one was unable to convert those starts into a big score. A good partnership between Dinesh Karthik and Eoin Morgan helped KKR put 163 on board which was a decent total. KKR, however, will be concerned with the form of allrounder Andre Russell who has failed to get going this year. He plays a crucial role in finishing the innings which KKR has been missing this year.

There was a surprise in store for SRH fans as Kane Williamson opened the innings for Sunrisers as skipper David Warner decided to come in later than in his usual position. The second innings had a similar story to the first as many players got the start but no one was able to convert it into a big one.

Coming down the order, Warner came in clutch as he went unbeaten to take the game into superover. One of the primary reasons for KKR being able to restrict SRH was fast bowler Lockie Ferguson who was on point with his bowling and claiming three crucial wickets during the game.

Bowling first, KKR decided to go with Lockie Ferguson and he repaid the faith in him.

Two wickets in the first 3 balls of the Super over and the target for KKR was just 3 runs. That was one of the best bowling efforts in the Super over which deserves a lot of credit.

In the end, it was an easy target for KKR to chase as they confirmed a crucial win which took them into the top half of the table and in a good position in their quest to qualify for the IPL playoffs.

MI lost its top order very cheaply but it was the perfect time for Mumbai to show its batting depth as the middle order came together to contribute towards achieving a decent total. Quinton De Kock scored a well-made half-century and Kieron Pollard added the finishing touches to take Mumbai to a total of 176 at the end of 20 overs.

For KXIP most of the batsman got starts but were unable to convert them into high scores except skipper KL Rahul who continued his purple patch, scoring yet another half-century to take his side on the brink of victory. It seemed like Punjab had it in the bag but some brilliant bowling from Jasprit Bumrah and Trent Boult took the match into a super over.

SUPER OVER DRAMA ( TWO OF THEM ) YES REALLY:

Jasprit Bumrah bowling for Mumbai conceded just 5 runs in the first super over to put MI in driving seat. Mohammed Shami was equally up to the task as he defended six runs in the super over to take the match to an unimaginable Double Super Over!

Chris Jordan bowling the second super over gave away 11 runs against Kieron Pollard and Hardik Pandya on the back of some excellent fielding by Mayank Agarwal to save 4 runs for his team.

Universal Boss Chris Gayle and Mayank Agarwal comfortably chased down the target against Trent Boult who missed his yorkers, to finally bring an end to this wonderful match.

A match to remember for ages and one where both the teams equally deserved to get the points. This win for KXiP keeps their hope in the IPL tournament alive.

Here's a look at the updated IPL 2020 Standings and current holders of the orange cap and the purple cap. 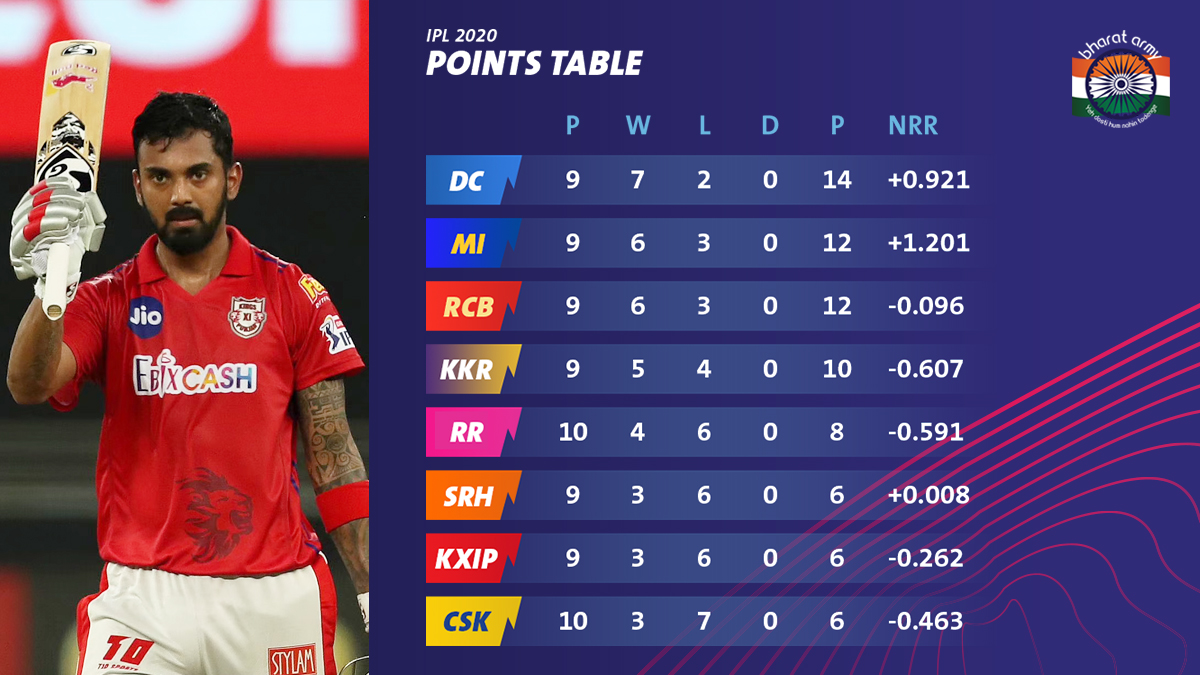