Perth is almost unfairly blessed with extraordinary beaches. Transparent blue water with astounding visibility meets sugary sand that seems to stretch on forever. Perth has more sunny days than any other capital city in the world. It has perfect beach-going weather and a population that happily obliges. Join the locals in embracing the beach from dawn till dusk during the T20 World Cup's in 2020, when you're in for a lot of fun.

It's fair to say that Cottesloe Beach is Perth’s pin-up beach. With its feathery soft blonde sand, its clear aquamarine ocean, its grassed terraces and its sprawling Norfolk pines, it charms without even trying. A 20-minute drive from the city centre, Cottesloe looks its best in the morning before the wind, locally known as the Fremantle Doctor, blows in from about 10.30am. Or bring a picnic later in the day. Waves are generally gentle but surf lifesavers are regularly on duty; look for the red and yellow flags and swim between them. Marine Parade, which runs parallel to the coast, has numerous cafés and bars that compete for attention. We love The Cottesloe Beach Hotel for its summery vibe and white decor made fun with bright colour splashes. Start with a cocktail in The Beach Club's sunken lounge then move into Cott and Co for a seafood dinner at sunset. If you're visiting in March, don't miss Sculpture by the Sea, an international exhibition of huge art installations on the sand. 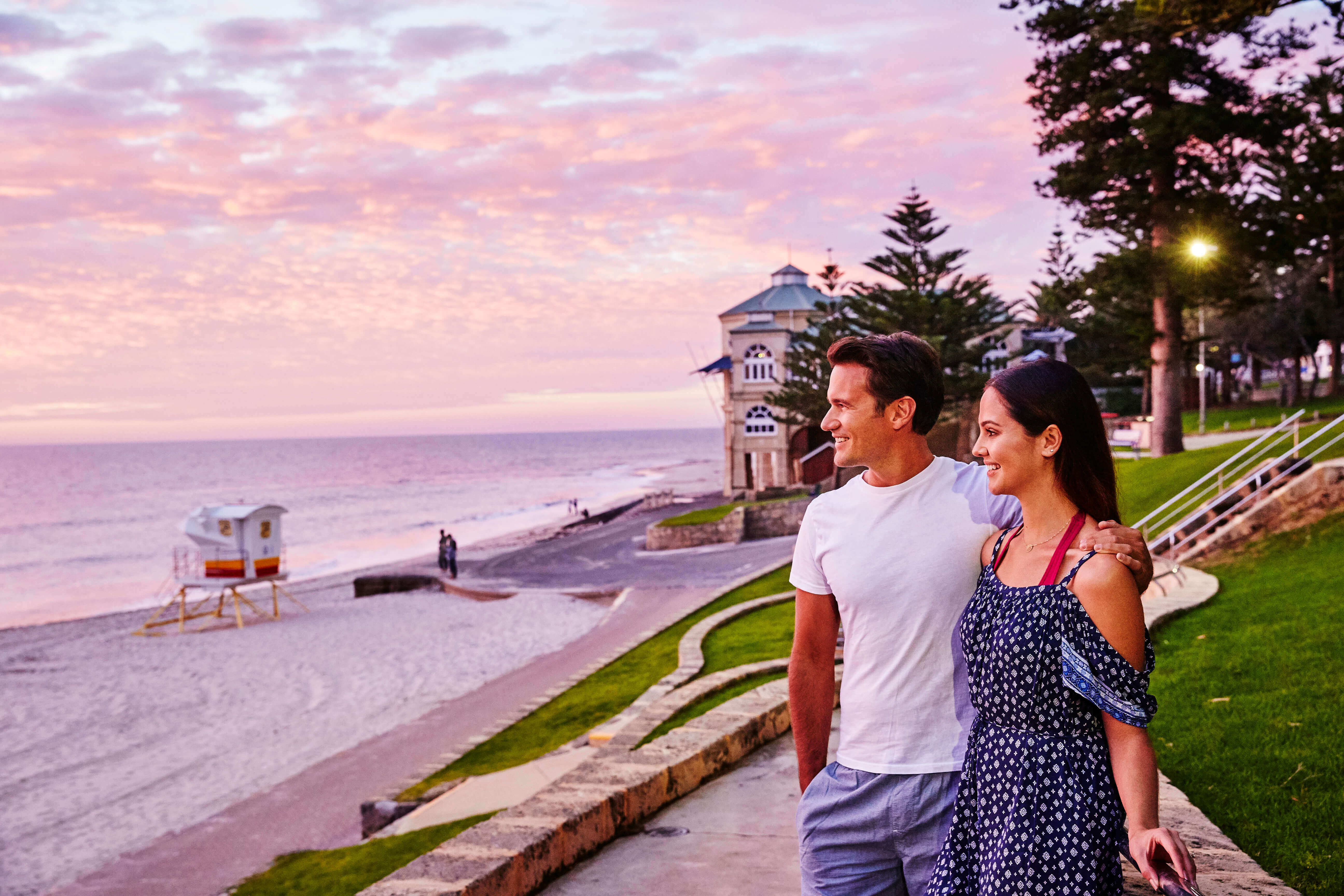 The most popular of Perth's northern beaches is Mettams Pool, off the coast-clutching scenic section of the West Coast Highway. It offers interesting snorkelling, with shallow access to leafy sea grasses and intricately patterned fish, starfish and octopuses. Go on a calm day to make sure you avoid rough seas and rips.  After a swim, flop down on the finely ground pale sand and feel a part of the happy local scene. There's wheelchair access, with a concrete ramp that leads to the sand. The beach is regularly patrolled by surf lifesavers; check patrol days before you go and always swim between the flags. For the area's best coffee, go to Yelo. 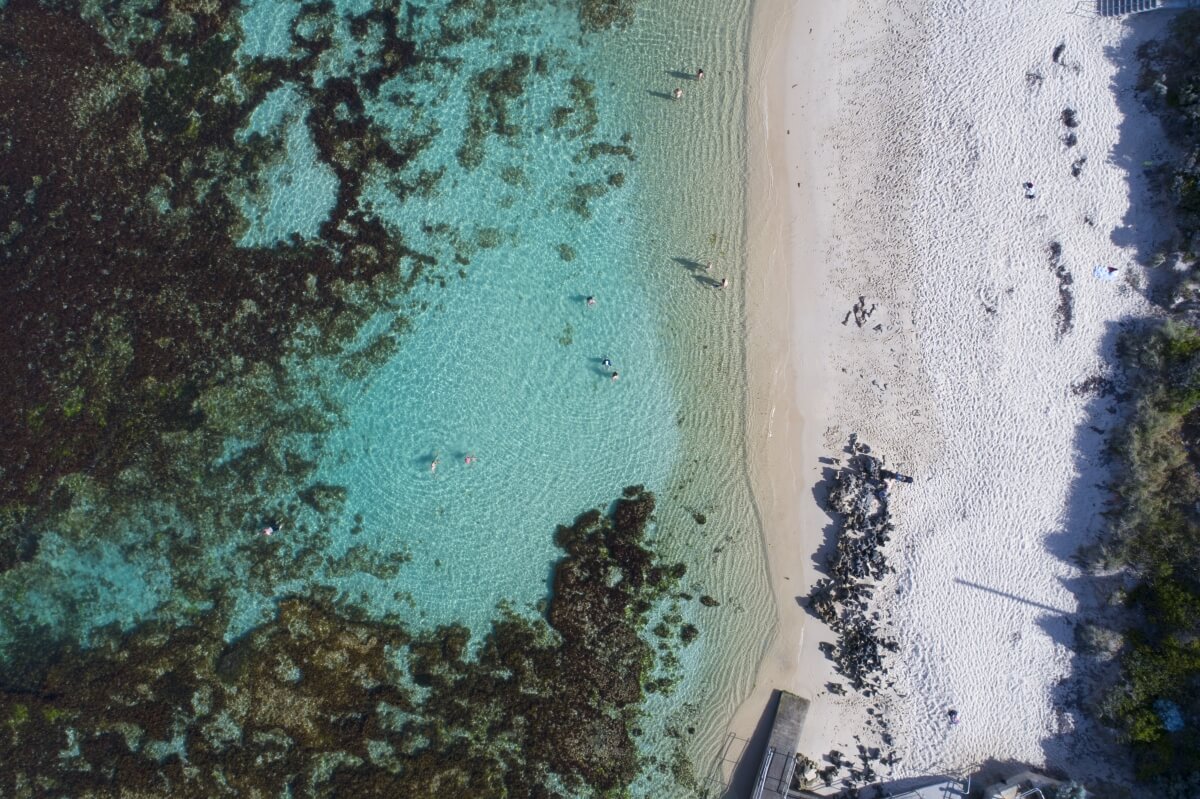 Bathers Beach is the first stretch of urban sand in Australia to be granted a liquor licence, so expect to find a convivial scene in front of Bathers Beach House. The restaurant, with a casual, café-style deck and sun umbrellas, puts deckchairs on the sand and drinks are allowed, too. Despite being in the heart of Fremantle, the petite, 300-metre (984-foot) long beach has a secluded feel and is largely frequented by locals who are very fond of their little secret. The sand is soft underfoot, and the waves are small and soft. Given that Bathers Beach is between the Fishing Boat Harbour and an 1830s jail called the Round House, you could spend all day exploring this historic and cultural area. 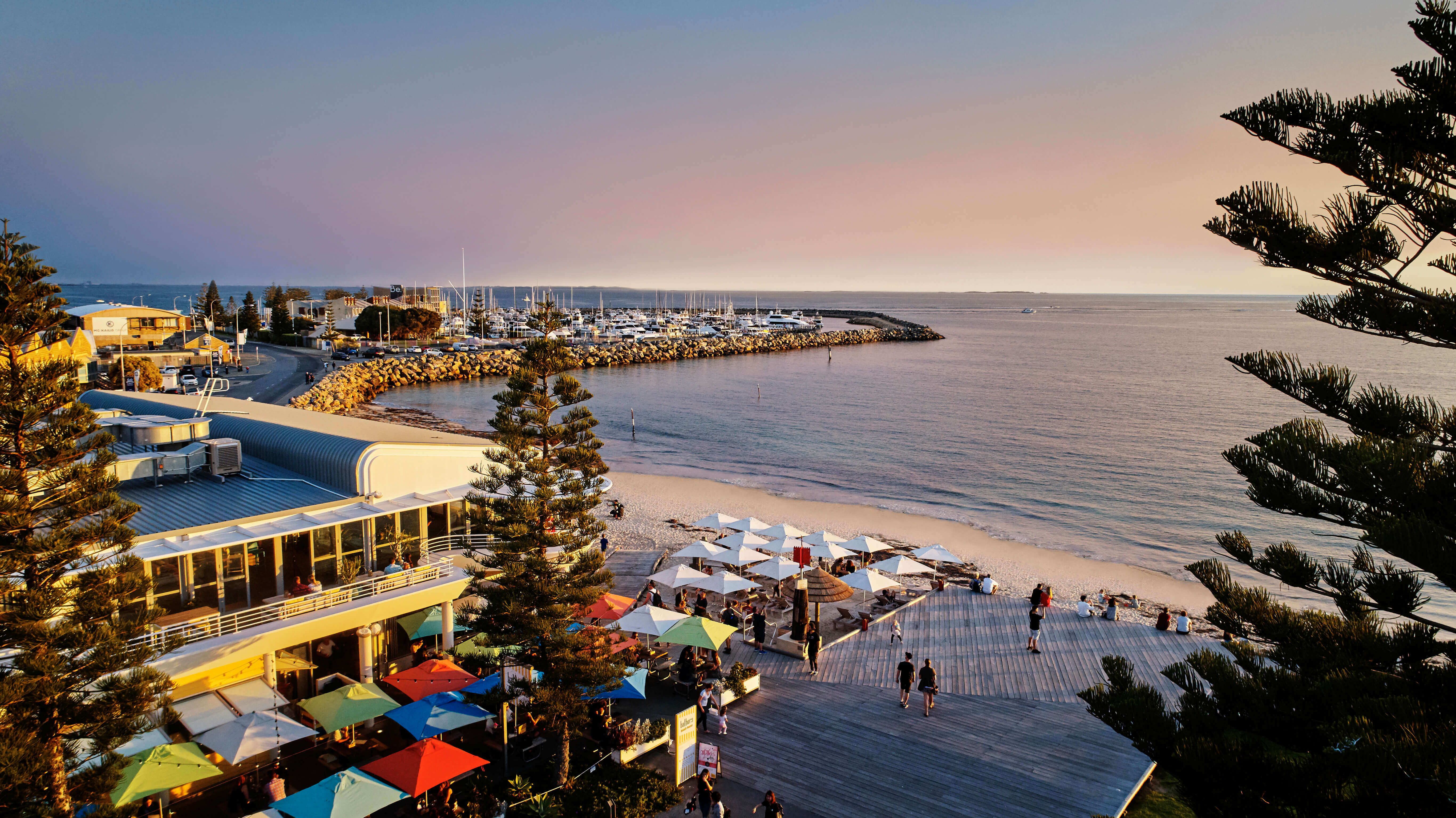 If you want to feel like you've arrived in the Caribbean, head to Leighton Beach. Bring your sunglasses, because the 1.5-kilometre (0.9-mile) long, straight stretch of powdery sand is blindingly white, turning the shallow sea a light shade of azure. Perfect for paddling, the water at this patrolled beach doesn't deepen for some way and waves are small, with no undertow. Its flatness makes it a magnet for kitesurfers and windsurfers on windy days. Leighton is also popular with dog owners. Locals tend to set up for the day here, bringing sun shades and umbrellas, drink and food supplies, sunscreen and towels. Others will shake the sand from their feet and stop for lunch at nearby Bib & Tucker for an excellent casual meal facing the coast. 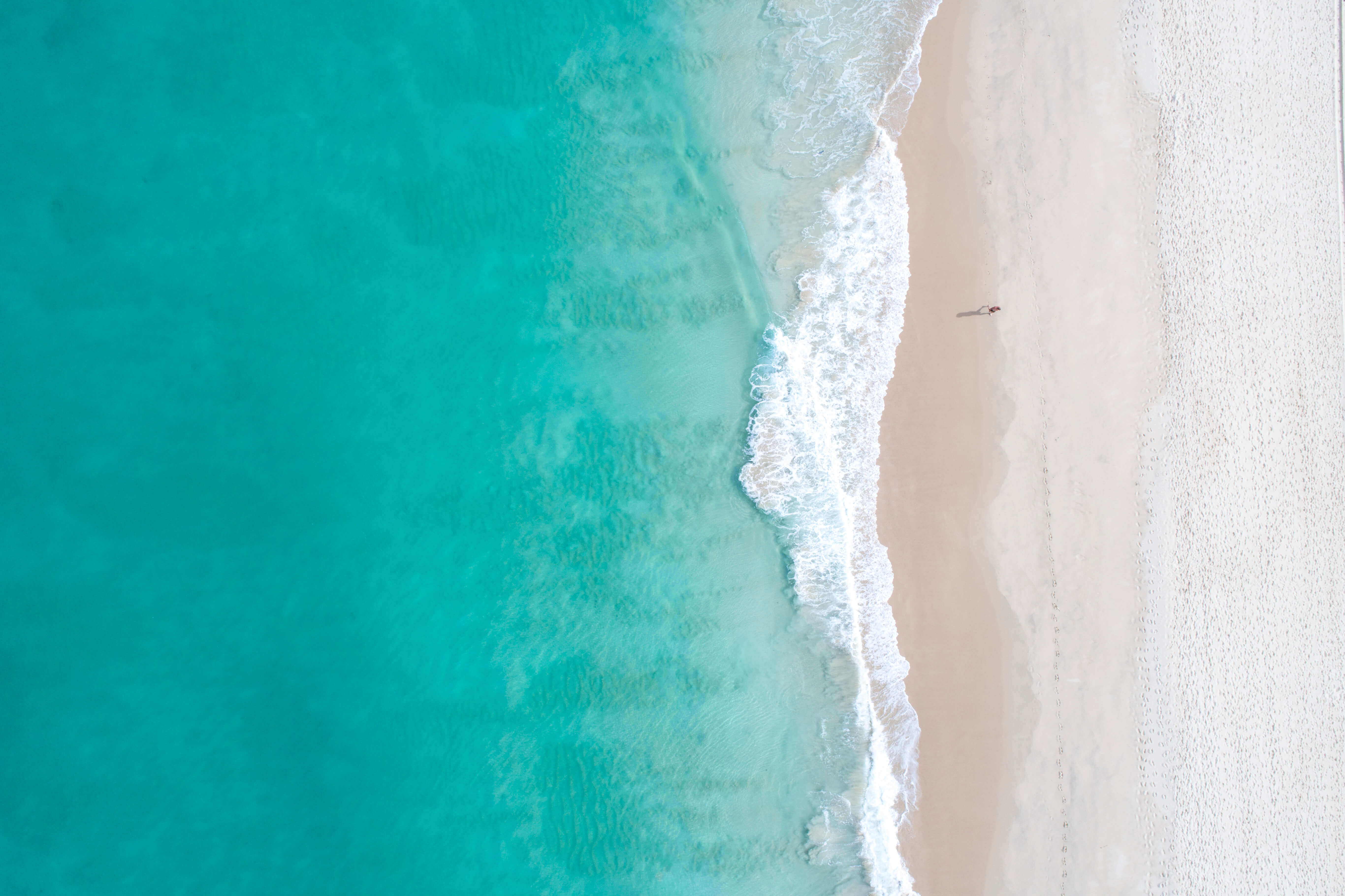 City Beach is the closest beach to Perth's city centre (about 15 minutes by car) and is framed by eateries Odyssea, which has a chic but casual feel, Hamptons, which attracts a fancier crowd, and Rise, a pizzeria. All enjoy fantastic coastal views. Clancy's Fish Pub, which has long enjoyed its perch at the northern end of the beach, serves more mainstream, pub-style fare and has a simple side café for parents wanting to stay close to the outdoor playgrounds and shaded grass areas. The beach itself is a lovely stretch, though waves can be powerful at times, and the wind often blows strong at the end of the day. 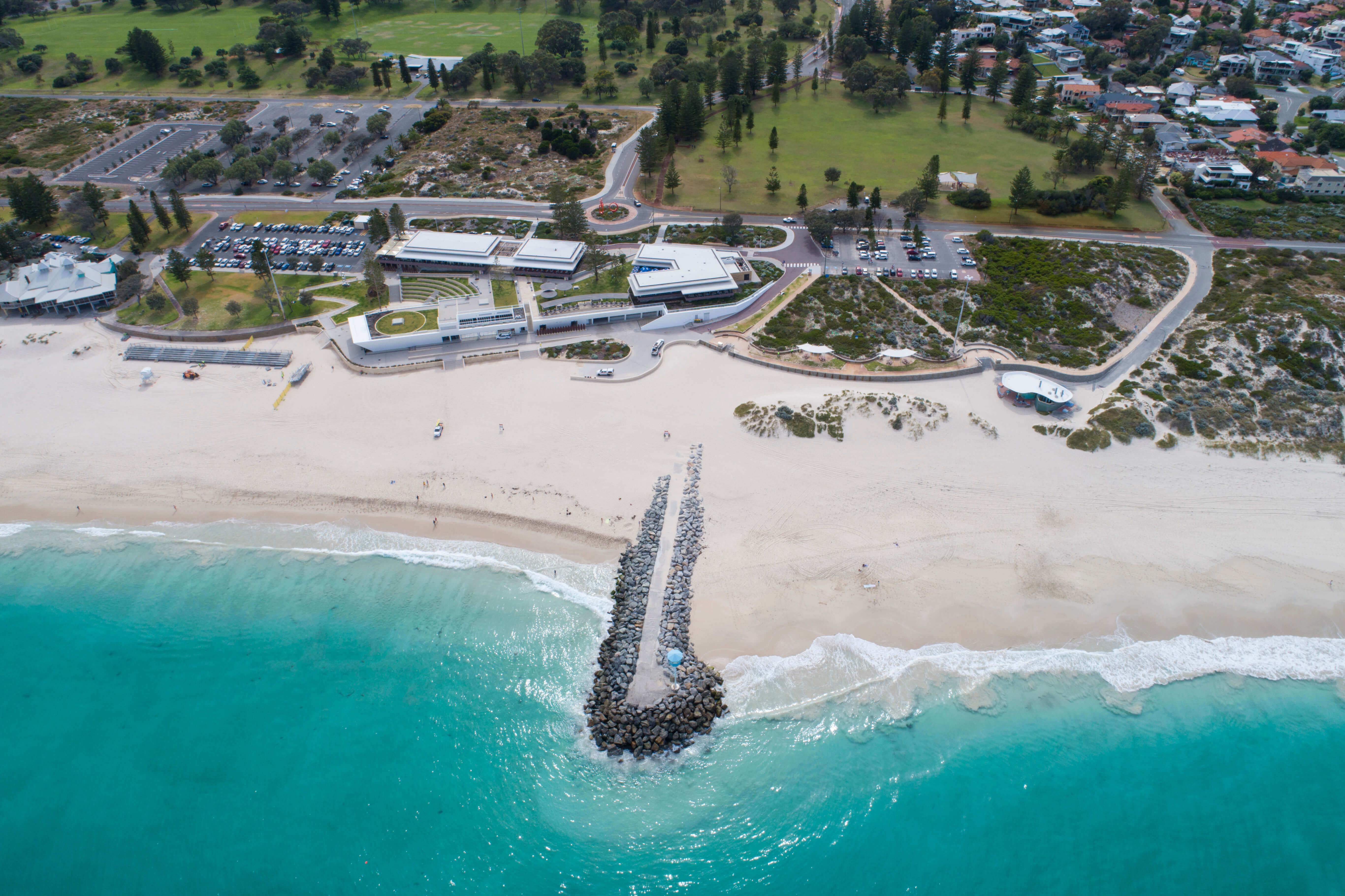