In a team that is renowned for the belligerence of Cheteshwar Pujara, the flamboyance of Virat Kohli and the promise of Rishabh Pant; the other seemingly fringe characters actively take a backseat.

Hence, it took a sort of collective lukewarm performances from the aforementioned trio for others to notch the spotlight at Antigua.

Hanuma Vihari’s case for selection in the Indian team has been a very curious one so far. Drafted in when the series against England had almost gone out of hands, he showed tremendous character in his first international innings to bring up a well-deserved half-century.

From thereon, he went on to play some Test matches in Australia, performed decently well but was never able to grab the high scores. Despite performing briskly enough for a new entrant in the side, Vihari always seemed to remain away from the public eye for long.

His real character though was displayed in full attention in the Boxing Day match at Melbourne. As India’s two frontline openers struggled to attain form in the first couple of games, Vihari was surprisingly promoted to open the batting along with Mayank Agarwal.

He dealt with the barrage of bouncers, the wicked movement of the new ball and the overall aura surrounding the moment with tremendous grit throughout his stay for almost 18 overs.

Vihari scored only eight runs but faced up 66 deliveries for the same and did the job of seeing off the new ball to perfection.

It was a role previously donned by Akash Chopra in the tours of Australia and Pakistan in 2003/04, and though Vihari was asked to do so only temporarily, he did it with the utmost awareness and confidence.

He then returned to the vacant number six spot in the first Test at Antigua last week, and the results were there for everyone to see.

Nudging ahead of Rohit Sharma

Rohit Sharma’s presence in the dressing room must have cumulated some auxiliary pressure on Vihari to stake his claim at the spot. It might not have been this apparent around six months ago, but Rohit’s enthralling performances in the World Cup have turned the general notion of buttress in his favor.

The persistence with Vihari from the team management was heartening to see, but now it was upon the 25-year-old to pay back the faith with some credible performances. 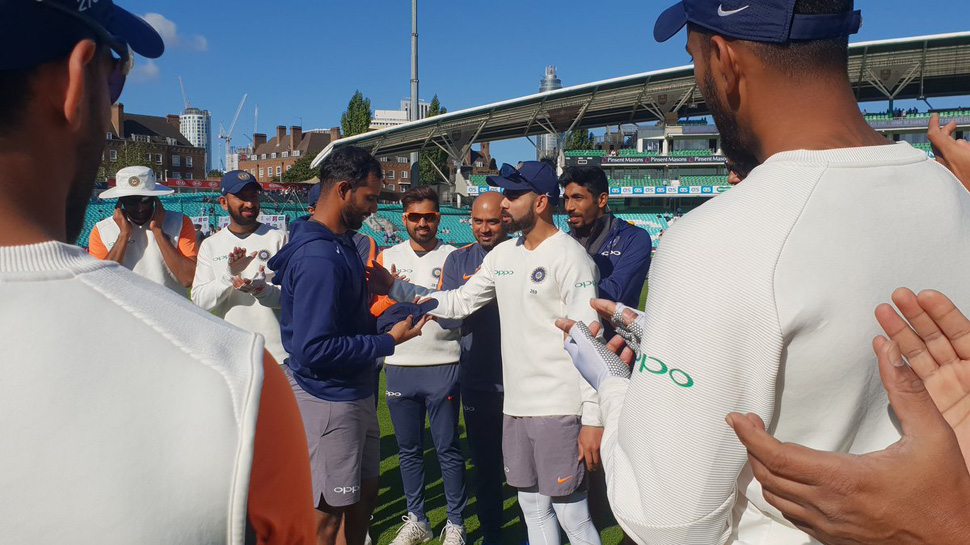 Hanuma Vihari made his Test debut against England in 2018. Image: BCCI

So, the Hyderabadi batsman minted the chance with precision and detail; failing to completely capitalize on it in the first outing, but scuffing it by its neck in the second one.

One of the major admirable qualities regarding his batting approach has been the sheer ability to isolate himself from whatever his batting partner at the other end must be doing. Many newbies in the side are subject to stumbling across due to trying a tad too hard after vigorously observing their contemporaries.

There is a strong sense of assurance in his gameplay, something that emerges from confidence upon oneself after having ground it out the hard way in the gruesome rigors of the Indian domestic cricket circuit.

A Product of the First-Class System in India:

Vihari has played 74 first-class matches and averages an impressive 59.30 with 18 centuries to his name. He has scored 6108 runs in the process, with the highest score being an unbeaten 302 runs against Odhisa.

He has been a consistent performer in the first-class circuit and possesses certain traits that makes him more suitable for the long-standing vacant number six spot in the Test lineup.

Firstly, the Delhi Capitals’ batter is a sweet timer of the ball. He doesn’t look to hit it too hard, instead just tries to get the feel of the leather to the willow at the perfect moment. This doesn’t mean that he believes in a negative, ultra-defensive batting approach either.

Both of Vihari’s innings in the previous Test match spoke volumes of his intent and the mere conviction with which he goes about his stay at the crease. He didn’t refrain from using his feet to trouble the rhythm of the spinners, and drove and creamed the deliveries through covers and in the ‘V’ whenever presented with an opportunity.

There was a visible projection of his astute game-awareness as well when he saw Shannon Gabriel breathing fire and consistently testing him in that dreaded outside the off stump line repeatedly. Though he was in a very good touch at that moment, Vihari showed patience to leave deliveries that weren’t meant to be disturbed, and then went on about his business without much fuss.

Even when he was dismissed in the second innings, it was more because of trying to accelerate the flow of runs rather allow the captain to declare early, nevertheless of the fact that he was in his 90s at that point in time.

More than anything, it is quite important for Vihari to succeed for world cricket to get another demonstration of Indian cricket’s resolute domestic structure. He hasn’t leapfrogged into the team through splendid IPL performances; rather, his record in the T20 format of the game is quite modest.

Hanuma Vihari has spent years battling the demons in dusty Ranji Cricket grounds, and now is his time to stand apart amongst his peers and settle down at a spot in the national team for the long run.