Inclement weather conditions brought a premature end to what turned out to be a cracking day of Test cricket at Antigua. On a pitch that had enough moisture for the bowlers to exploit, the Windies opening pair of Roach and Gabriel ran riot against the Indian top-order, reducing them to 3-25 before a defiant 4th wicket stand between Rahul and Rahane followed by yet another partnership of substance between the latter and Hanuma Vihari brought India back into the contest. 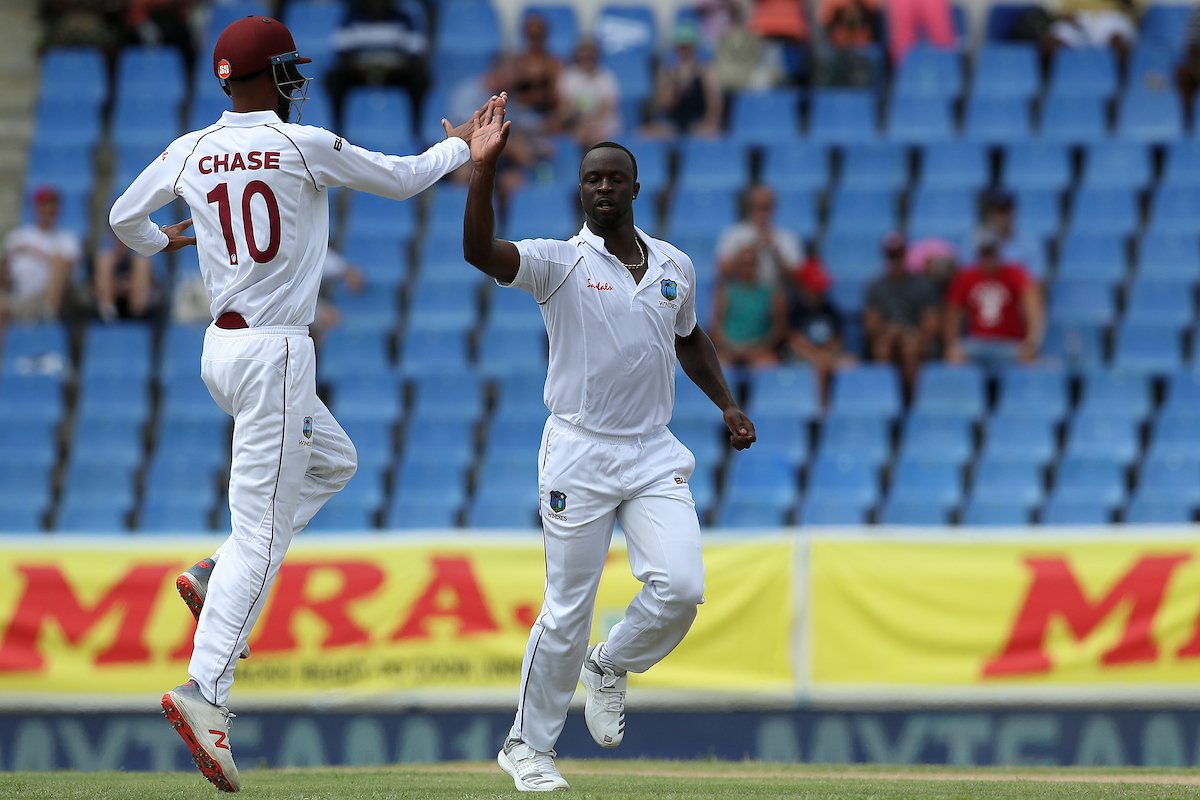 On a pitch that had enough in it to keep the bowlers interested, Kemar Roach vindicated captain Holder's decision of opting to bowl first by striking in only the fifth over of the morning session when he pitched one angling into Mayank's pad and straightened at the very last moment to take his outside edge.

1-5 quickly became 2-7 as Kemar Roach continued his love affair with the North Sound, inducing an outside edge out of the irresistible Cheteshwar Pujara. The morning got even worse for Team India when Shannon Gabriel got rid of their skipper Virat Kohli with a perfect set-up: short ball followed by another short ball and then a wide one outside the off-stump; Kohli fell for the bait, only to see Brooks take an outstanding catch at gully.

KL Rahul (37*) and Ajinkya Rahane (10) ensured there were no further hiccups for the visitors as the backup bowlers of the West Indies, most evidently Miguel Cummins (0-18 after 5 overs) failed to capitalize on the good work done by Roach and Gabriel. While Rahul pounced on anything short or wide, Rahane looked cautious in his approach as Holder continued to test him outside the off-stump.

Afternoon session: Rahul and Rahane consolidate before the former falls on 44 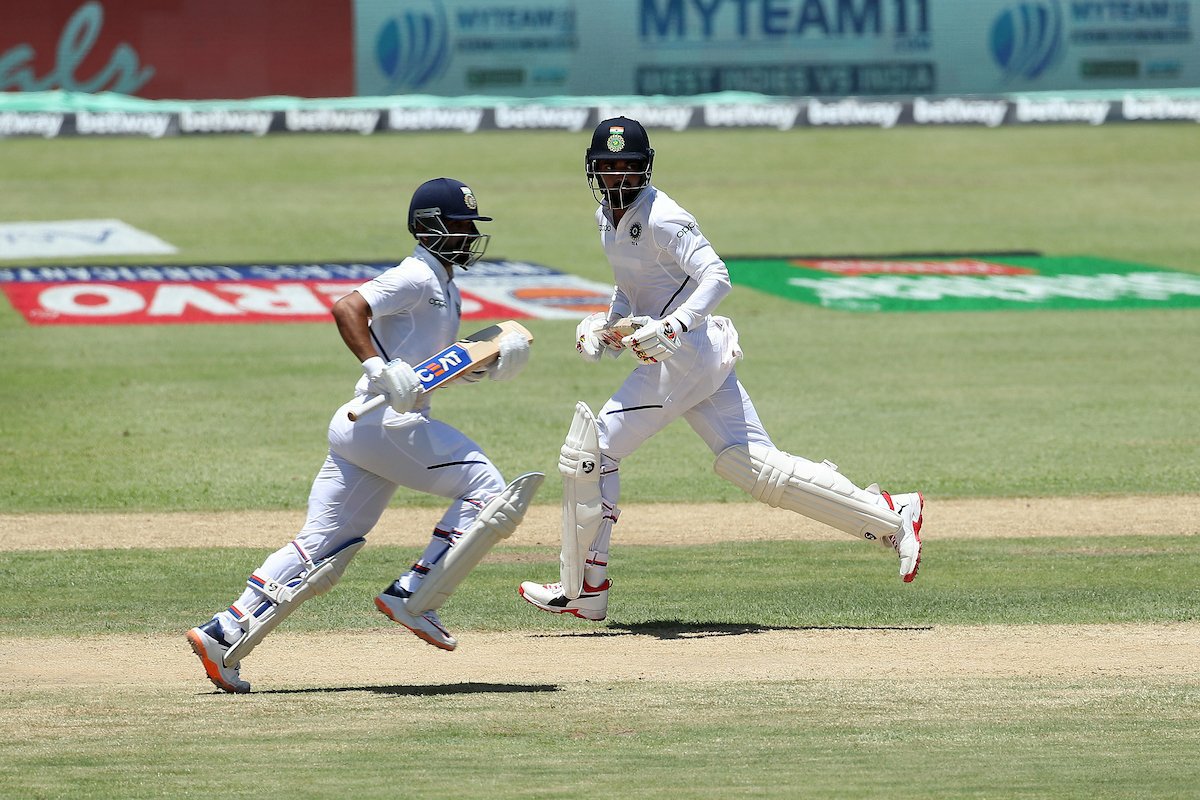 After a cautious start, Rahane started off positively in the second session. The Indian vice-captain cashed in every time Roach and Gabriel erred in their line and lengths to crack three boundaries in the first four overs. The partnership soon crossed the 50-run mark with the likes of fast bowlers failing to replicate the exploits of the first hour. But just as it looked the duo were in complete control, Roston Chase got KL Rahul strangled down the leg-side at 44.

Ajinkya Rahane, on the other hand, continued to be dig in at the crease. The right-hander brought up India's 100 in the 38th over with the deftest of touches guiding the ball to third-man against Jason holder. West Indies could have had Rahane for 40 had Cummins held on to the backward running catch at long-on off Roston Chase.

The Mumbai batsman soon brought up his 18th half-century in Test innings before rain brought a premature end to the Afternoon soon. After 47.2 overs, India was 4-134; a significant recovery after Roach and Gabriel had reduced them to 3-25 in the fiery opening burst. 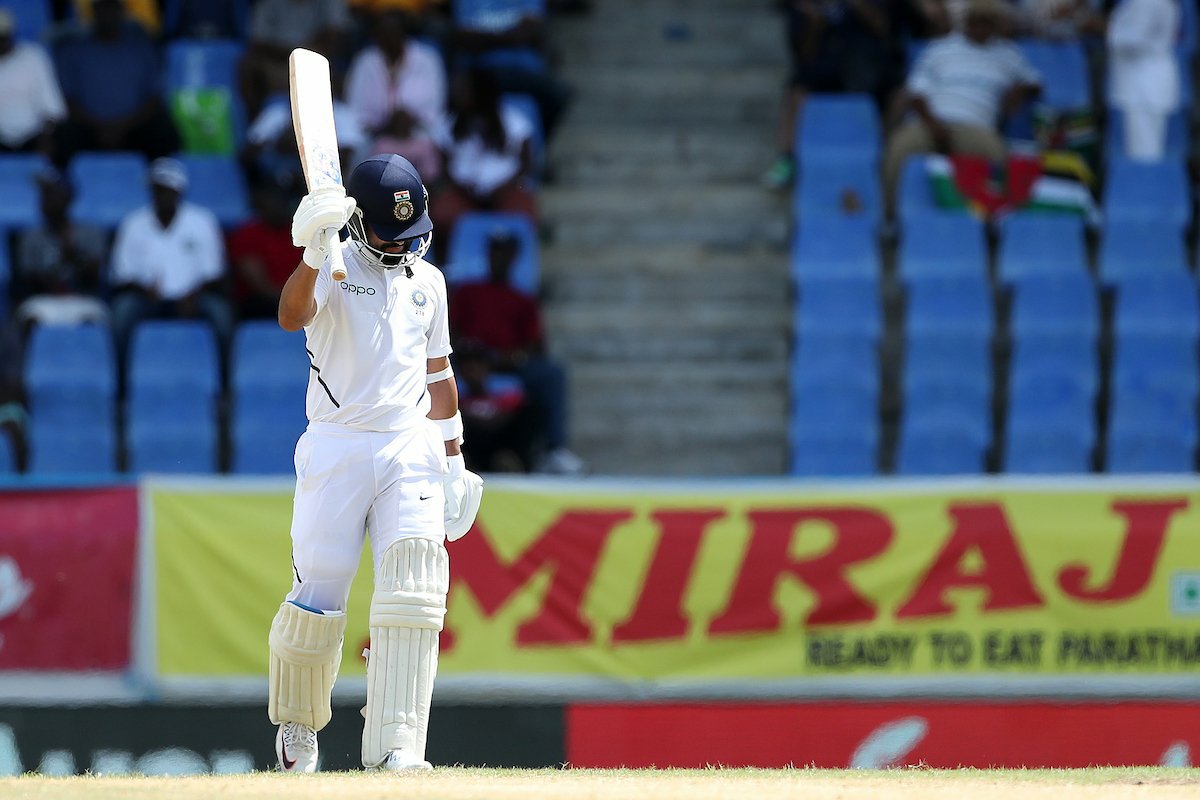 The game eventually got underway after a brief delay and Rahane and Vihari started the session by taking the attack to the Windies bowler. The Windies started the proceedings with Roston Chase and Miguel Cummins. Rahane, in particular, attacked both Cummins and Chase from the outset, cutting, driving and flicking with disdain, every time the bowler erred in his line or length.

Hanuma Vihari proved to be an ideal foil for Rahane at the other end despite his struggles against pace. Even Roach wasn't spared. The Windies spearhead was welcomed into his first spell after Tea with a cracking square-cut by Ajinkya Rahane. But eventually, it was Roach, who turned out to be the partnership breaker. The fast bowler induced an outside edge off Hanuma Vihari's bat to give a much-needed break to the hosts.

Shanon Gabriel denied Ajinkya Rahane (81 off 163 balls) from getting his first ton in Test cricket since August 2017 when he got the latter to chop onto his stumps, reducing India to 6-189. Rishabh Pant and Ravindra Jadeja ensured there were no further hiccups before rain brought a premature end to the days, with India's score reading at 6-203 after 68.5 overs.