In a country where your achievements bore a shadow of your male counterparts, it is not easy to be a Women's cricketer, and it certainly wasn't during the 90s where a girl picking up a cricket kit wasn't considered a fit in a male-dominated sport.

But, as they say, passion and perseverance, no matter what the adversity is, takes you places- Mithali Raj testifies it to the hilt, carving her own niche in a male-dominated sport.

This is the story of a cricketer who revolutionized Women's cricket in India and, dares I say in the whole of the sub-continent- a Bharatnatyam trained dancer who went on to become one of the torchbearers of her sport.

From a Bharatnatyam dancer to a child prodigy

As an eight-year-old, Mithali had trained as a Bharatnatyam dancer but it was two years later- at the age of ten, where the seeds of her future were sown. The three people instrumental in gifting India their crown-jewel was her father- a retired Air Force sergeant, Jyothi Prasad, a former FC cricketer and Sampath Kumar.

Being a sleepy girl that she was, Mithali's father used to take her alone to her brother's cricket coaching sessions in Secundrabad. Mithali would finish her homework, sitting on the boundary before the restless girl would pick up a bat to hit balls as far as she could. Her backlift and swift movements to drive the ball- convinced Prasad of Raj's precocious talent.

But, Mithali's stay at St John's as short as it was an all-boys' camp, forcing her father to take her to Sampath Kumar. If Jyothi Prasad was instrumental in spotting Raj's talent, it was Sampath Kumar, who channeled her into a World beater.

"They didn't give me an idea that there had to be a Plan B. They trained me like a racehorse. I wasn't allowed to see right or left, so I didn't have to deal with negativity, jealousy, insecurities or peer pressure. I didn't have proper relationships with my cousins, because I didn't attend family gatherings, for cricket's sake. Even today I'm not as close to my cousins as I am to my team-mates. I missed out on school excursions, school days, so yes, I have missed a lot of things." Mitahli on training under her coach, Sampath

Sampath was instrumental in the making of Mithali Raj. His simple logic was to aim for the stars and hit the moon. So rigorous was her cricket coaching that Raj, barely ten, had to give up her Bharatnatyam training.

Mithali arrives amidst doom and gloom

Women's cricket was in a quandary in the late 90s. The game was stagnating and steadily losing players due to lack of money, inadequate infrastructure and recognition. Enter a 16 year and 205 days old, Mithali Raj. On her international debut against Ireland in 1999, Mithali made a scintillating 114.

For Mithali, it was a redemption of sorts. For it was two years ago- in 1997 when she was denied an opportunity to represent India in a World Cup after the officials felt that a 14-year old might not be able to take the rigors of a World tournament. It was an emotional moment too, as she had lost her coach Sampath in a motorcycle accident.

Three years after her ODI debut, Raj was handed the coveted Test cap. She scored a fifty in her second match, but the true test was about to come on the tour of England later that year.

The 2002 tour of England was where Raj made the cricketing world stand up in awe to her precocious talent. She sizzled with a double-hundred [214] at Taunton- the highest individual score in Women's cricket at the time.

The innings was certainly the making of Raj and by the time 2003 rolled on, it was nearly impossible to name an XI sans Mithali.

Captaincy and a role-model to current Women Superstars

With Mithali becoming the spearhead of the Women's team alongside Jhulan Goswami, the captaincy wasn't far away from the stylish right-hander.

When she did get the role in 2005, Raj led India to their first World Cup final, after scoring an unbeaten 91 in the semi-finals against New Zealand.

India eventually lost the finals to Australia but a cornerstone for the future was laid, as the feat inspired India's current superstars in Smriti Mandhana, Veda Krishnamurthy and Harmanpreet Kaur to take up cricket. Inspired by India's performance in the 2005 World Cup, 12-year-old Harmanpreet Kaur pestered her father to enroll her for trials at the Karnataka Institute of Cricket in Bangalore. Likewise for a nine-year-old [in 2005] Smriti Mandhana, Raj was a big influence during her formative years.

The relentless support of her parents; marriage

Mithali's impact on the likes of Mandhana and co nearly did not materialize, for the rigors of international cricket had taken a toll on her, and by the time 2009 had rolled on, Raj was already thinking of retirement.

"Of course they have dreams of seeing me married," Mithali says as her parents nod along. "Even though they understand, they still sometimes bow down to pressure from society and relatives. I'm not someone who goes by what society thinks. To each his own life. They are comfortable today because they know I'm not immature. They are happy about it now and have left it entirely to me." said Raj to Cricinfo in 2016

In a country where questions begin to hound a female superstar about her impending marriage, Mithali's parents, who had made several sacrifices for her career, were her biggest support, for they understood that forcing her into marriage would have undone years of hard work.

And the records galore-

The Torchbearer of Women's cricket

While the 2005 World Cup performance laid the cornerstone of a better future for Women's cricket, inspiring a whole set of 9-10-year-old girls to take up the sport, the 2017 side under Mithali, skyrocketed the Women's game on the front page.

Raj laid the platform- both on and off the field, scoring fifties at will in the tournament while at the same time, shutting down a journalist with disdain when asked about her favorite male cricketer.

"Do you ask them who their favorite female cricketer is?"

India failed to cross the final hurdle yet again, but the likes of Mandhana, Kaur, Veda Krishnamurthy became household names, finally moving away from the shadow of their male counterparts. It is said that the hallmark of a sportsman or a leader from any facet of life is how he/she leaves the team or an organization in a better place than they inherited it. 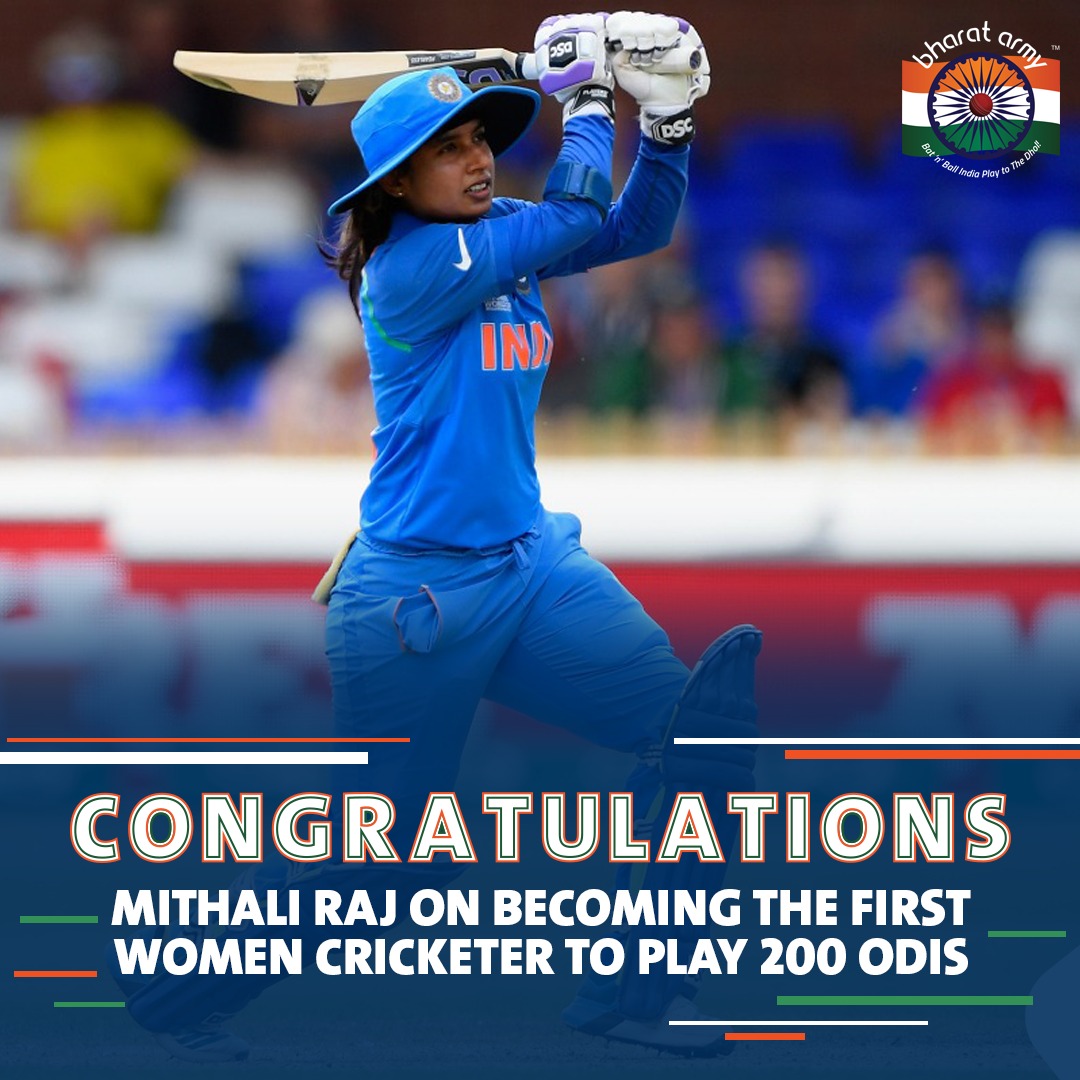 When Mithali burst on the scene, Women's cricket was in a mess with very little opportunities, infrastructure, and recognition. Today, in the twilight of her career, as she prepares to represent India for a record 200th time in ODI cricket, the Women's game, controversies notwithstanding, is thriving more than ever, with more opportunities, improved infrastructure, and recognition.

Thank Mithali Raj for playing a major part in it.