England managed to redeem their fledgling campaign with a clinical 31-run win over the Men in Orange (Blue) at Edgbaston. The 31-run loss meant India's unbeaten run in the 2019 World Cup is now over. In the end, it turned out to be a rather disappointing finish after Rohit Sharma and Virat Kohli had set the platform for the power-hitters to cash in at the later stage. But unfortunately, after Pandya's dismissal, both Dhoni and Jadhav played with a given-up feeling. It was as if the duo had resigned to fate and were happy in just plodding along.

In the end, the fact that they just lost just five wickets and still ended up 31 runs short of the target, would leave them disappointed. As always, India's template was to build a solid platform to allow the likes of Pant and Pandya to tee off at the later stage. The first powerplay saw India score just 27 runs for the loss of KL Rahul. 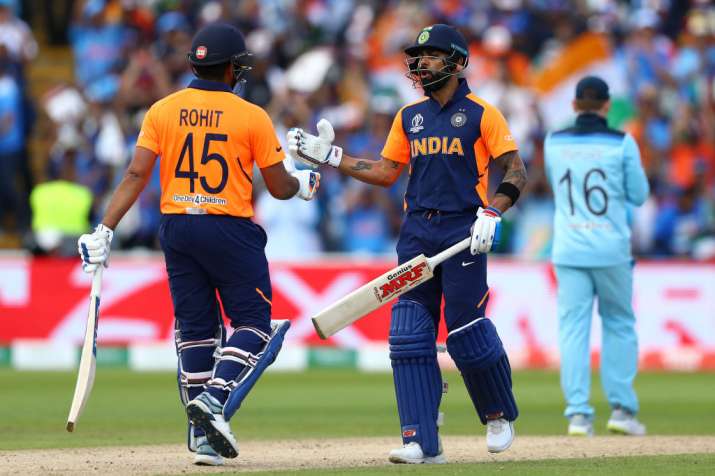 With England's bowlers taking the pace off the ball- a hugely effective trick on this surface, Rohit and Kohli had to be agricultural for their runs. But with two great players at the crease, England was wary of the impending acceleration.

And, they did exactly that. Kohli smoked two back-to-back boundaries while Rohit suddenly awoke from slumber crunched three boundaries in the 20th over. At 1-146, England was in desperate need of a wicket and Plunkett responded to his captain's wish when Kohli, in an attempt to guide the ball to point gave England a massive opening. After Kohli's dismissal, India needed Rohit to bat through the innings but the right-hander fell soon after completing his 25th ODI hundred. With 140 required off the next 14 overs, the only chance that India had was if Pant and Pandya could tee off.

Pandya [45 off 33 balls] looked in great touch, smoking 36 runs off his first 20 balls, but England got their plans spot-on against the all-rounder; all the deep fielders were put in front of him and he was bowled only off-cutters. With the run-rate moving past 12, the right-hander eventually holed out in the deep, ending India's hopes.

Will the real England stand up, when it really mattered? This was the talking point leading into this crucial encounter for the hosts. And, they did show up at the cost of India's spinners. On a flat track, Jason Roy [66] and Jonny Bairstow [111] gave England a perfect start. Shami and Bumrah bowled well in the first ten overs, challenging both the edges of the batsmen's bat without any luck.

India would have had Roy though when Hardik Pandya strangled him down the leg-side, had they decided to review the umpire's decision. That indecision proved to be a critical moment in the game. The next 10 overs saw Bairstow and Roy tee off India's spinners, taking 89 runs between the 11th and 20th over.

Jadeja's stunning catch to dismiss Roy and Shami's consistent strikes in the middle-overs where he bowled 2-3 from 3 overs pushed England back a bit, but despite Bumrah's [1-44] stunning death bowling, a stunning onslaught from Ben Stokes (79 off 54 balls) meant the hosts eventually got to a total, enough for MS Dhoni to torturously plod along at the death.