The Best Day Trips from Perth 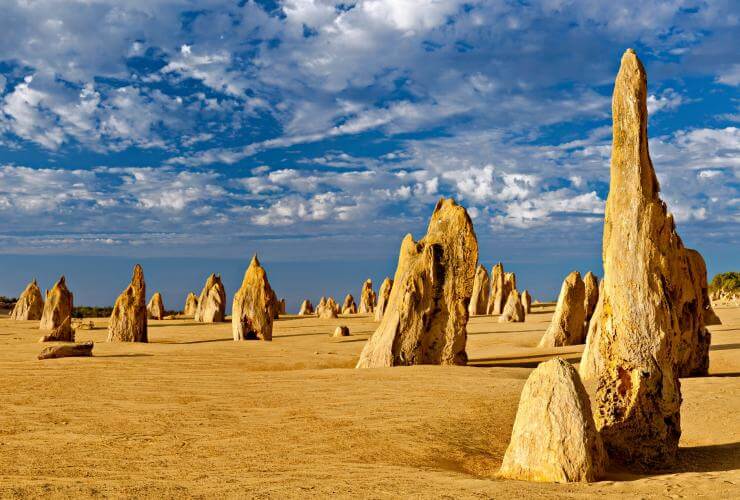 The stunning limestone formations known as the Pinnacles are near Cervantes, 250 kilometres (155 miles) north of Perth in Western Australia. A crayfishing town, Cervantes is the gateway to Nambung National Park, which contains the Pinnacles Loop – a four-kilometre (2.5-mile) road that can be driven or walked in about an hour. The Pinnacles Desert contains thousands of striking limestone pillars set against shifting golden sands. You might also see wild emus stalking among the spires. The park, with its otherworldly landscape, can be visited all year round, but there's a bonus in spring, when the wildflowers and wattles are in bloom. Visit at dawn to see the shadows cast by the unusual formations, or experience the eerie landscape at sunset, when the colours change with the moving sun.

The vast Avon Valley, a one to two-hour drive from Perth, covers seven localities, from Beverley in the south to New Norcia in the north. Potter around quaint townships such as York, roam around in spring to see pretty wildflowers, delve into pioneer history and drive among rolling hills. To see the picturesque valley from above, take a ride with Windward Balloon Adventures, based in Northam. Arrive hungry in the benedictine community of New Norcia and sample artisan treats such as nut cake and breads baked in the monastery's century-old wood-fired oven. Quench your thirst with Abbey Ale, aged in the cellars beneath the monastery. If you have extra time, consider driving the PUBLIC Silo Trail to see intricate large-scale murals painted on towering grain silos.

You don't have to look hard to find the focal point at Busselton, just over 200 kilometres (138 miles) south of Perth. Everything here revolves around the 1.8-kilometre (1.1-mile) long jetty. It's the world's longest wooden pier. Stroll along the jetty or take the cute, red, 50-seat train to the end, where there's an underwater observatory, accessed via a spiral stairway. You’ll even find an Australian first here: a dining experience eight metres (26 feet) below the ocean’s surface. As you wander along the jetty, keep an eye out for dolphins frolicking in Geographe Bay. From September to early December, migrating whales also use the bay to rest and nurse their young.

Fremantle (known to locals as ‘Freo’), on Perth’s southern fringes, is a vibrant waterfront city with great beers, al fresco food and intriguing history. Try the craft brews on tap at the landmark heritage pub-brewery, The Sail & Anchor, located along a section of South Terrace known as the Cappuccino Strip, or stop into Fremantle’s local brewery, Little Creatures. Nearby you’ll also find the Fremantle Markets, open Friday to Sunday. At Fremantle Prison YHA, bunk down for the night in a former prison cell or in one of the Victorian-style guards cottages.

Less than a one-hour drive south of Perth lies Rockingham, known not only for its raw beauty but it’s incredible wild dolphin encounters. Every year from early September to early June, pods of dolphins come to play in the ocean bordering Rockingham, and you can join them in the water with Rockingham Wild Encounters. Board the boat in Rockingham before setting out into the clear waters in search of dolphins. After a group of dolphins is found, slip on your wetsuit and climb into the water in small groups. You’ll be led by an experienced crew member to swim along as the dolphins frolic around you. Rockingham Wild Encounters will also bring you to the nearby Penguin Island for a chance to spot wild penguins. After your wildlife experiences, continue your journey through Western Australia’s stunning southwest corner, or drive back to Perth.

The Swan Valley, a 25-minute drive north-east from the centre of Perth, is Western Australia's oldest winemaking region. Explore the valley's wineries, renowned for world-class chenin blanc, verdelho, shiraz and petit verdot varieties that grow in a reliably warm and dry climate. Lancaster and Sandalford Wines are Swan Valley institutions, while boutique wineries like Ugly Duckling are also worth a taste. The valley is also home to microbreweries that produce beer, cider and ginger beer, and distilleries bottling everything from rum to pavlova-flavoured vodka. Take an all-day tour to experience not only the impeccable wine and spirits, but also chocolate, cheese and beer. Before you head back to Perth, visit Caversham Wildlife Park to meet some of Australia’s most adorable animals including kangaroos, wombats, koalas and echidnas.

Rottnest Island, a 90-minute ferry ride from Perth, is famous for its population of quokkas - small, furry macropods known for their adorable smiles. Head over on a day trip and cycle around the island, or spend the night there for the best chance of seeing the quokkas emerge mid to late afternoon to forage (there are free guided walks); don’t forget to snap a few photos. You’ll also find stunning beaches and bays on this island; bring along a snorkel to explore straight from the sand. Rottnest offers a range of accommodation. Sleep (almost) under the stars in the luxury eco-tents offered by Discovery Parks.