Neeraj Chopra, the golden boy from Haryana, triggered a new high in the history of the Indian Olympics when he became the only Indian to win gold in athletics. After his brilliance in the Javelin field on the 7th of August at the Tokyo Olympics, he achieved this feat, ending a 100-year medal drought for India in athletics. 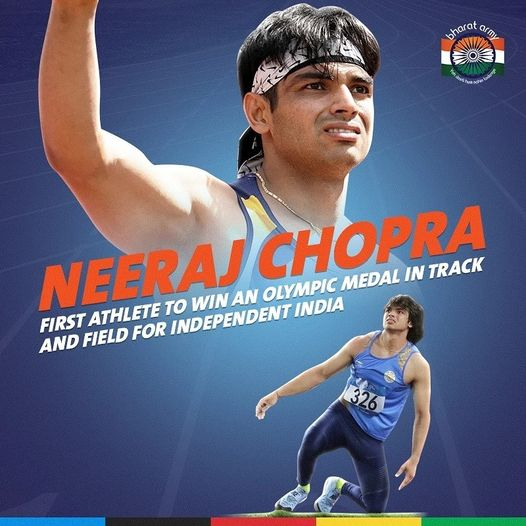 After the legendary Abhinav Bindra, Neeraj also became only the second Indian to win a gold in the individual event. The 23-year-old has only become a sensation across the nation after his heroics at the Tokyo 2020 Olympics. Still, for those who watch the athletic space keenly, Neeraj Chopra has always been a familiar name. In a journey filled with all the highs and lows, Neeraj defied all the odds to become one of the most celebrated athletes of India. The Bharat army takes a look at this inspirational journey: 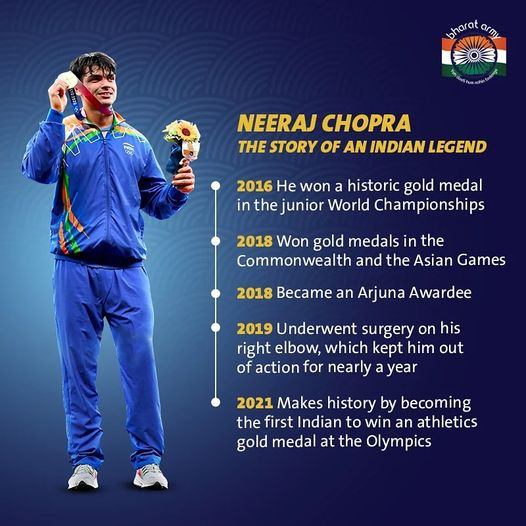 Born in the Panipat district of Haryana, Neeraj wasn’t really the fittest during his childhood. His friends and neighbours constantly ridiculed him for his obese personality. Fortunately for him and the Country, the same mockery pushed him to dive into the arena of sports. Neeraj initially tried his luck with several events before finally sticking to Javelin throw. He was 13 when his talent in Javelin was first discovered by the then Haryana state Javelin thrower, Jaiveer Choudhary, who also, later on, became his coach, dazzled by his potential. Propelled by an early and powerful kickstart, Neeraj marched into several National and International level tournaments by the time he turned 16.

Neeraj swept several records during the period between 2016-21. The star athlete first rose to prominence after clinching gold at the 2018 Gold Coast Commonwealth games. With a throw of 85.23m, he became the Commonwealth champion and marked the beginning of a new era in Indian Javelin history. The same year, Neeraj represented India at the Asian games Jakarta and ended up with gold there. He registered his all-time best throw of 88.06m to bag the gold. He also went on a rampage at various international and national level tournaments held during the same period. The success at the Commonwealth and Asian Games has set the tone for him for various tournaments to come.

Neeraj had to experience a massive blow to his career in 2019 when scans revealed loose bodies in his right elbow joint. He also had to undergo surgery to remove them, which meant that he had to be out of the action for a while. The period was tough for Neeraj as he had to endure a long period of inaction. He spent all his efforts into rehabilitative training at the Indian Institue of Sport at Vijayanagar and left for South Africa for further training, with his coach, after the recovery.

Neeraj was quick to bounce back from his injury, as he smashed all the records in winning international tournaments such as the Folksam Grand Prix in the lead-up to the Olympics. He entered the Olympics as a hot favourite and a contender for the gold. Neeraj, however, had a big challenge in the form of Johannes Vetter, a German athlete with a personal best of 97.76m. Living up to the expectations, Neeraj marched into the Javelin finals by topping the qualifying stage with a staggering throw of 86.65m. He saved his best for the finals, as he delivered an 87.58m throw to clinch the coveted gold at the Tokyo Olympics, creating history, while the athletes from the Czech Republic bagged the silver and bronze. Incidentally, Johannes Vetter, who was projected as a challenger to Neeraj, failed to qualify for the ultimate top 8 round. 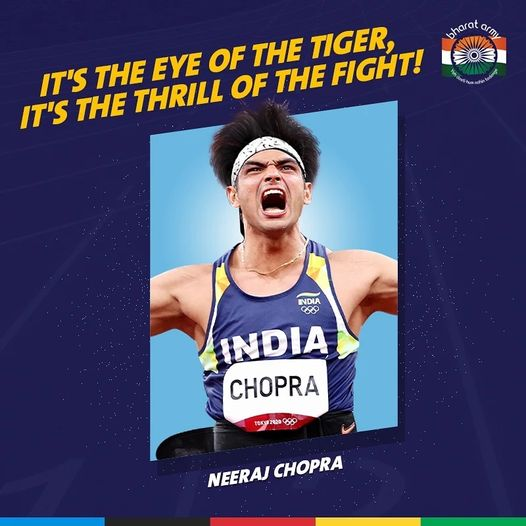 Neeraj is garnering a host of praises and rewards from all around the corner and deservingly so. This will, hopefully, act as an inspiration for various budding athletes in India. Neeraj also expressed his desire in breaching the 90m mark and his ambitions about the Paris 2024 Olympics. The Bharat army wishes nothing but luck for all its future endeavours.