Virat Kohli once again failed to cross the three figure mark in his latest international outing but he may well have scored the greatest 79 that has ever been made in Test match cricket.
Hang on, what's that? Is this even a thing? Like, who cares about a 79?
Well! Perhaps in a universe where cliched milestones don't take precedence over the quality of a performance, there is space for such knocks.
Few days from now when Virat registers another sub-100 score, perhaps no one will remember the masterclass that the Indian captain served us against a relentless South African attack at Newlands. Social Media will blow up with "X innings or Y days since Kohli scored an international ton".
But, unfortunately, that's the brutal reality. At the end of the day, no one really remembers anything outside of 100s, 5-for. Just ask MS Dhoni and R. Ashwin.
But, what the hell! Let us keep everything aside for the moment and just sit back, soak it in and appreciate what we all witnessed at Newlands on day 01.
Let's enter Virat Kohli's world to try and make sense of what went into carving out a masterclass, where he basically played against natural instincts. 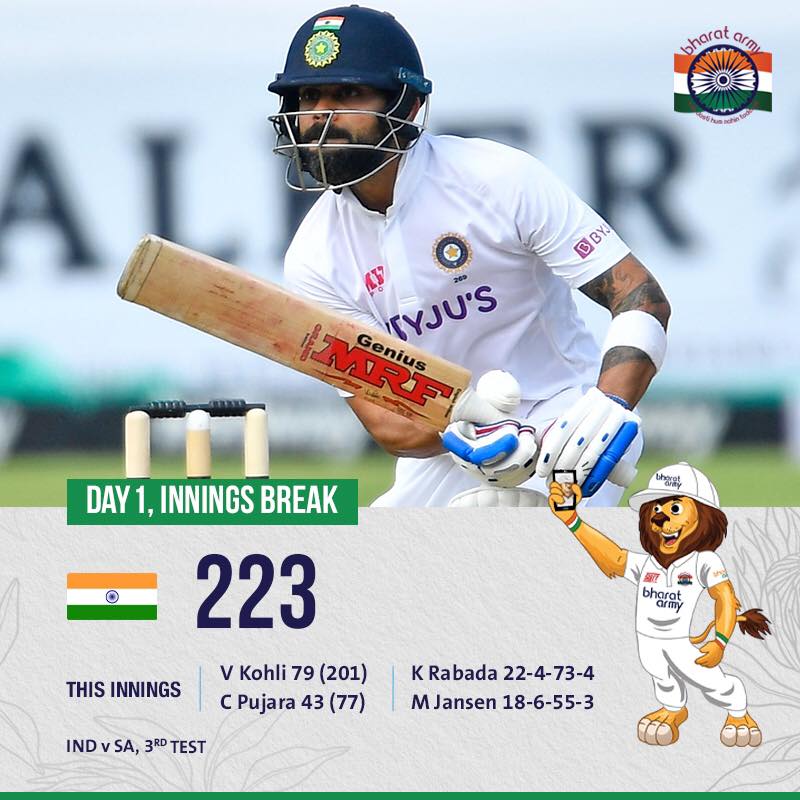 There's been a lot going around for Kohli these days, you know. His fans have been regularly advising him to put away his bread-butter shot, the extra cover-drive. The calls accentuated to the hilt during the Centurion Test when he nicked off in an attempt to drive, especially in the first innings where he chased a 6th, 7th stump delivery.
On Tuesday, Kohli got off the mark with the same shot and social media went wild. In fact, all his three boundaries during the first 100 balls he faced came through cover-drives. The first scoring shot that Virat hit came after 15 deliveries of defence where he kept leaving balls outside the off-stump.
Marco Jansen kept probing outside the off-stump but Kohli was in a different space altogether. There were shades of the similar thought process he applied during his breakthrough Test knock in Perth (2012) or the 2018 season where he kept defining natural instincts, almost as if meditating on the field, lost in his own cocoon of perfection.
You know there is something magical about seeing freaks transcend themselves into a mortal when a situation demands and that is exactly what makes them a 'freak', right?
The best example of that came during the Kohli-Pujara partnership where it seemed as if the duo had exchanged souls. While Pujara was on the offensive, Virat, it felt, was like a monk lost in his own world.
The South Africans kept probing, luring him into that extravagant drive but Kohli didn't slip. He showed remarkable restraint and only chose the right deliveries to show-off his picturesque stroke play.
According to CricInfo ball-by-ball data, Kohli left 64.7 percent of the deliveries that the South African pacers dished out on and around the off-stump.
CricViz noted that Virat left close to 66% deliveries he faced in the zone (outside off-stump) and in the first 158 deliveries, he had left 50% of them.
One of the most intriguing passages of play came during the Lunch session when Kagiso Rabada, who produced a masterclass of his own in his 50th Test, bowled a sensational spell to Virat.
It was akin to two boxers at the height of their powers landing punches at one another. While Rabada kept spitting fire by testing him outside off stump besides peppering him with hard lengths, Kohli kept leaving the tempters, while at the same time, not missing out on a scoring opportunity.
It was proper box office stuff with an unstoppable force in Rabada trying to move the 'immovable object' from his sight but Kohli not giving an inch.
While all this was happening, Kohli and India kept losing batsmen at the other end, and ultimately, it paved the way for his demise as he was forced to shift gears.
Kohli's control percentage throughout his knock was in the 90s. He even smashed his first six in Tests away from home since 2018;  he even added a few more examples in the tutorial of 'How to drive a cricket ball', but the shot that will define this knock will be the one that he actually didn't play.