India began their World Cup conquest against hosts and tournament favorites in the eyes of many, Australia. Australia Women had just handed India a defeat in the final of the tri-nation series a few weeks ago and the desire to find retribution on the biggest stage possible was strong in the dressing camp. That reflected in the performance on the pitch as well. Deepti Sharma remained undismissed at 49 and Shafali Verma scored a quick-fire 29 off just 15 deliveries to post a total of 132 in Sydney.

In response, Alyssa Healy came on strong, getting her half-century in just 35 balls. Once Poonam Yadav got rid of her, the rest of the Australian batting line-up with the exception of Ashleigh Gardner could not even get going and failed to even register double-digit scores. Poonam Yadav breathed fire with her deliveries and finished her four-over spell with four wickets, becoming Player of the Match in the process.

India then took on Bangladesh at Perth in the second group stage fixture. Shafali Verma did not let the quick dismissal of Taniya Bhatia affect the batting plans as she hit a monstrous 39 in just 17 balls, her innings including 2 fours and 4 sixes. Jemimah scored 34 as India set a target of 143 for Bangladesh. Poonam Yadav was the pick among the bowlers in that match, with three wickets as Arundhati Reddy and Shikha Pandey shared two each, helping India defend its total by 18 runs.

The Women in Blue took on the challenge of the White Ferns in the third group stage game at Melbourne. Once again, India was asked to bat first and once again Shafali Verma ended up being the Player of the Match, starring with 46 runs with the bat in 34 deliveries. India finished with 133 runs which proved to be just about enough to secure qualification to the semi-finals.

The final group stage fixture was against Sri Lanka. Radha Yadav ran the show with four wickets as Sri Lanka could only post a meager 113 runs on the board. Shafali Verma once again played a majestic knock of 47 runs. She would’ve reached her first half-century in the tournament but was unfortunately run out. Jemimah Rodrigues and Deepti Sharma sealed the victory without much difficulty as India coasted to a seven-wickets victory as well as a hundred percent win record in the group stage.

In the semifinal. India was scheduled to take on England but not a single ball could be played due to intense rain and the Women in Blue made it to the final by virtue of collecting more points in the group stage.

Top Performers in the World Cup so far: 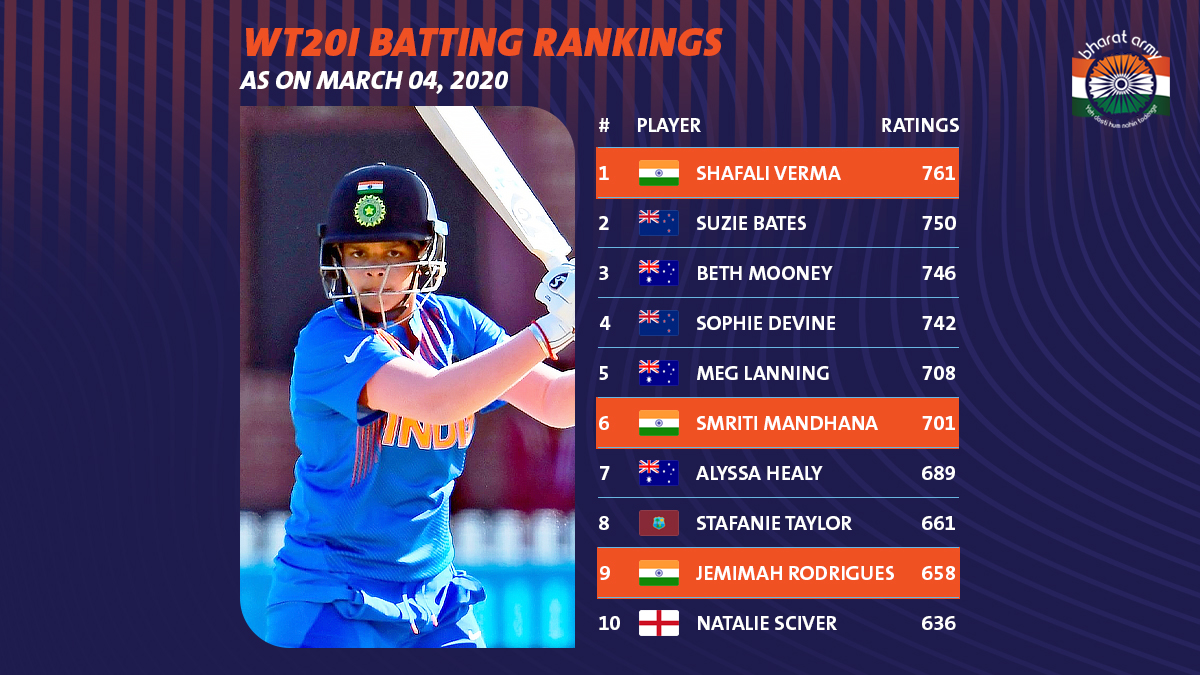 Shafali Verma has been one of the best players in the tournament so far and has two Player of the Match awards to her name already. She became the second Indian to successively achieve this feat after Mithali Raj in 2018. Even at 16, she has looked incisive and sharp with the bat and has maintained both panache and explosiveness. She will be desperate to get to her first half-century in the competition after coming close a couple of times and the semi-finals would be a grand stage to achieve that. 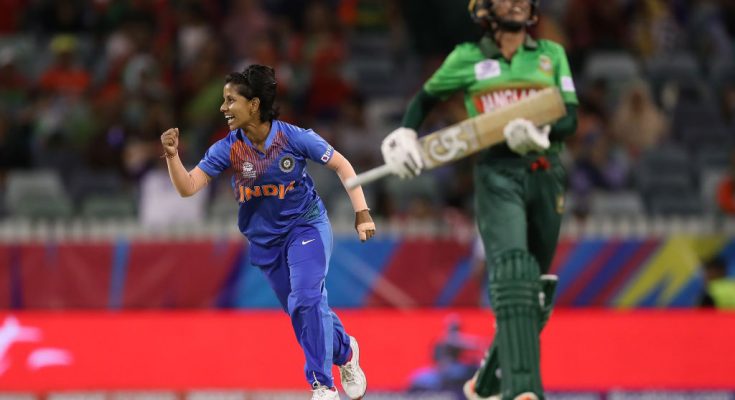 Poonam Yadav has been on fire throughout the World Cup. Image: ICC via Getty

Poonam Yadav has been the pick among the bowlers in the tournament so far. She began the campaign in the best possible fashion – picking up a four-wicket haul against the mighty Australia, deservedly winning Player of the Match in the inaugural match of the tournament. She followed that up with a three-wicket haul against Bangladesh at an economy of 4.50. She picked up another two wickets in the next couple of matches to take her wicket total to 9 in the tournament. 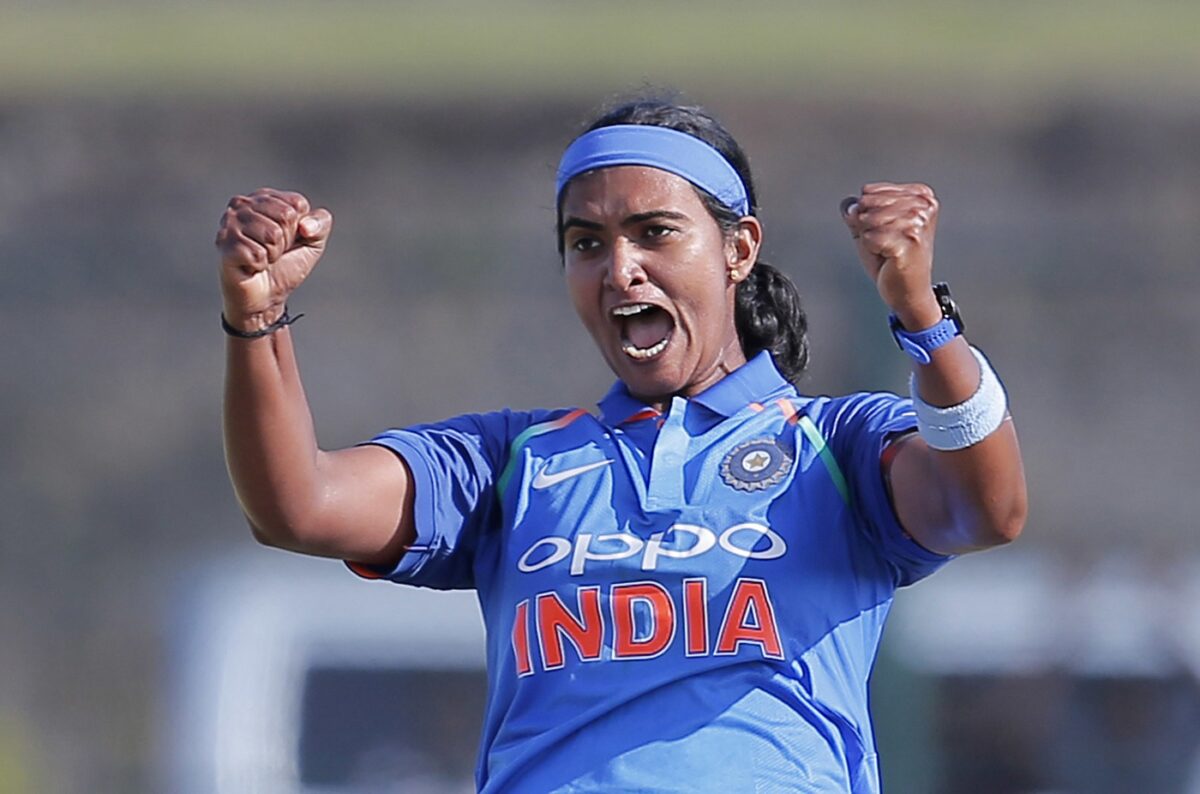 Shikha Pandey has bailed India on a number of occasions. Image: ICC via Getty

Shikha Pandey has been an important asset for India with both the bat and the ball. She has enjoyed a better time with the ball in hand. She got a three-wicket haul against Australia at an economy rate of 3.65 and followed that up with another two against Bangladesh at an economy rate of 3.50. Against New Zealand and Sri Lanka, she picked up a couple of victims across both matches. Her stringent economy rate has been pivotal for India defending the totals and she has also contributed with odd runs in the middle order.

Australia is the home side and just like India, made it through to the finals after a rain-impacted semifinal win against South Africa. The Aussies will be without the legendary Ellyse Perry, but still the likes of captain Meg Lanning and Nicola Carey more than good enough to make up for her absence.

India will not only be drawing confidence from the impeccable form of Shafali with the bat and Poonam Yadav with the ball, but also from the fact that they have already beaten the Aussies in the first game of the World Cup already.

The high-profile semi-final clash between India and England will take place on the 8th of March at the MCG in Melbourne. The game is expected to begin at 1:30 PM IST. The match will be broadcast across the Star network’s channels and streamed online by Hotstar.