Shardul Thakur opened the face of his bat to provide catching practice to Keegan Petersen at gully during the first innings of the Johannesburg. Thakur was dismissed for a 5th ball duck and, as always, skeletons were out of the closet.
Shardul had endured a poor game with both bat and ball in Centurion and with the Indian middle-order currently on ventilators, calls (and fair calls) had grown louder for the inclusion of another specialist batsman at his expense.
His tame dismissal in the first innings and the fact that Mohammed Siraj pulled his hamstring during the initial phase of the South African innings, jury was out on Thakur at close of play on day 01.
Many people started questioning his place in the side, some even called him a massive downgrade of Bhuvneshwar Kumar.
While some of the criticism was well intentioned but as is always the case on social media, sensible comments were outweighed by pure trolling with seasonal fans, who, just a few days ago, hailed Thakur as 'LORD', calling him 'Fraud'.
This isn't a new phenomenon as history has been privy to the fact that the world always salutes to the rising sun. No one gives a damn about what you have done in the past.
You are judged on a day-to-day basis and probably no one knows this better than Shardul himself.
Throughout his life, Shardul has seen people writing him off. He has seen more days where he has been called a "fraud". Even his new nickname "Lord" was initially coined to troll him.
Right from his formative years, people never really took him seriously as a cricketer.
His co-passengers used to mock him for wasting time and money for something that was supposedly "beyond" his reach: becoming an Indian cricketer.
He didn't deter.  In fact, the more stones they threw at him, the stronger he got.
There are two types of people in this world. There are those who get bogged down and lose all hope when they are criticised or written off. And then there are people like Shardul, who's resolve to prove everyone wrong gets even stronger when they are pushed into a corner.
And, so, it came as no surprise when Thakur hit back with disdain on the second day of the Test. With India already a bowler short during their defence of an underwhelming total, Lord Shardul rose to the occasion like he has on many instances in the past to script a performance for the ages.
He made brilliant use of the crease, kept attacking the batsman on and around the off-stump, got the ball to move consistently and time and again, kept producing timely dismissals for his team.
His figures of 7/61 are the best figures by an Indian bowler against South Africa in Test matches and within 24 hours of being called a 'fraud', he was once again trending on Twitter as "Lord Thakur" 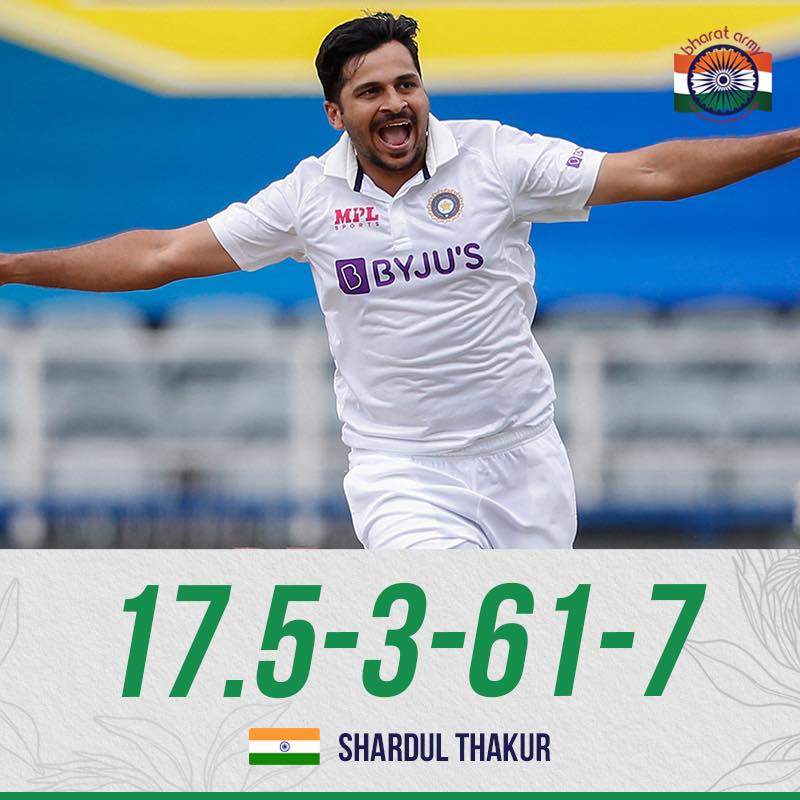 Thakur backed his bowling effort with a stylish 24-ball 28 where it almost looked as if he was Vivian Richards and Sachin Tendulkar rolled into one.
He may have taken just one wicket in the second innings but that dismissal of Aiden Markram, where he worked him over for four consecutive deliveries, was a perfect reflection of the fact that his success is not all about luck or fluke.
Thakur has honed his skills by toiling away on flat tracks in domestic cricket and while sometimes, it might look that he is 'lucky', he's not.
You make your own luck through sheer work and relentless persistence over a period of time. And that is exactly what is happening with Shardul.
He is not a world-beater by any means, but he isn't a 'luck merchant' either. He is a perfect example of 'good things happen to people who wait'. And he has waited enough for all this. All those long, painful journeys from Palghar to Mumbai, all those moments where he was written off by people, all those moments where he was trolled for not being good enough, would certainly feel worth it, if he looks back at what he has achieved in the last 12 months.
The first and second day of the Johannesburg Test pretty much sums up the story of his career thus far: He is 'fraud' one moment, and 'Lord' the other.
But, as always, truth lies somewhere in between, doesn't it?