This, after Angelo Matthews third ODI ton, guided Sri Lanka to a respectable total of 7-264 after they had been left reeling at 4-55 in the first 15 overs.

Rohit and Rahul nullify Malinga at the top Just like the last game against Bangladesh, Indian openers strode out in an attempt to maximize the first ten overs. After struggling for timing in the previous matches, Rahul looked in great touch from the outset.

Despite one or two nervous moments, Rohit Sharma looked in complete control, again. The right-hander played some delightful strokes, the best of them being the nonchalant whip off the pads bisecting mid-wicket and mid-on.

Rohit tees into Dhananjaya; Records galore for the Indian openers 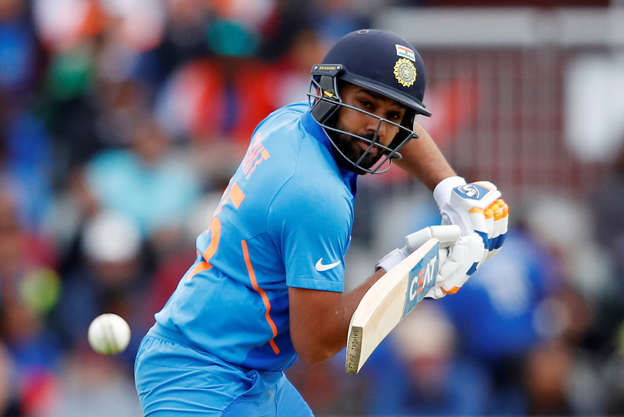 The right-hander brought up his 45th half-century with a six over mid-off and followed it up with another Brobdingnagian hit over the bowlers head, putting the pressure on de Silva in his very first over. Along with his half-century, Rohit also eclipsed Mt. 600 in this edition of the World Cup, becoming the second Indian and fourth overall to achieve the landmark.

Both openers scoring 100+ in a WC inngs

A single off Dhananjaya de Silva in the 19th over, took the opening partnership past the run-mark, making India the first side to post four hundred-plus opening stands in a single World Cup edition. After Rohit, Rahul too teed into de Silva, taking him for 14 runs in an over to bring up his 3rd half-century of the tournament.

The third 50-run partnership came in just 39 balls as the openers continued to dominate the Lankan bowlers. Lasith Malinga, who was brought in to stop the carnage, was wayward in his line and lengths. Every time he banged in short, Rahul would clear his leg and pull him in front of square. And, every time he compensated with his length, Rohit would lean into a serene cover-drive to move one step closer to a record 5th ton in this World Cup.

5th ton in the tournament for the 'Hitman'; Rahul breaks the Mt.100 barrier as India breeze past the target

And, the moment finally arrived in the 29th over when in a typical Rohit Sharma fashion pulled Udana in front of square, leveling Tendulkar's tally of six World Cup hundreds.

Most 100s in a single World Cup edition-

Rohit also became the first batsman to score five tons in a single World Cup, and the staggering thing is it has taken him just 16 innings to level Tendulkar's feat.

Virat Kohli came to the crease after Rohit edged one off Rajitha and continued in typical Kohli fashion: tap, run, drive, tap, run on the loop. But all eyes were on KL Rahul as to whether the opening batter will finally convert a half-century into a three-digit score. And, he did, finally. After having scored a hundred in his debut match, KL Rahul finally shrugged the monkey off his back, bringing his 2nd ODI ton with a single off Malinga in the 39th over. This was only the second instance of two openers scoring a hundred in a World Cup game. Rahul was finally dismissed for 111 but Kohli's fluent 34 ensured the target was nailed down in 43.3 overs.