A 9th 100+ stand between Virat Kohli (51*) and Ajinkya Rahane (53*) put India in a commanding position after day 03. The tourists are 260 runs ahead and still have seven wickets at their disposal.

With more than 100 runs in arrears, West Indies needed their skipper Jason Holder to get them as close to the Indian first innings total. And, the Windies skipper didn't disappoint. Miguel Cummins played and missed a million times (it felt more than that, to be honest) but ensured he held one end up to allow his captain to wither down the lead. Holder played some delightful strokes against Jasprit Bumrah, in particular, to defy the Indians.

The Windies captain survived a close LBW call off Mohammad Shami when he caught Holder on the backfoot with a nip-backer: full and straight delivery pinning Holder on his back leg. India reviewed the on-field call only to see Umpires Call flashing on the screen. It was a frustrating morning for Team India, one that reached to its hilt when Cummins successfully reviewed a caught-behind decision off Shami.

But India and Shami's persistence was finally rewarded when Holder edged one to Pant. Cummins long vigil, a 45-ball-duck, which is a new record for the West Indies was finally dislodged by Jadeja. Indian openers barring Agarwal's outside edge in Gabriel's first over survived the trick period of seven overs unscathed with an overall lead of 89 runs.

Windies started off the proceedings with the duo of Roston Chase and Cummins, and although albeit luck this time, the off-spinner struck immediately when he pinned Agarwal in front of the wickets. Agarwal looked shellshocked at the decision but decided against reviewing the on-field call. The replays suggested he should have as the ball was going over the stumps comfortably.

Post Agarwal's unfortunate dismissal, Pujara, and Rahul held the fort to blunt the Windies attack. Pujara looked very comfortable against both pace and in particular while KL Rahul flattered to deceive, like he as done for the umpteenth time in his career. After doing all the hard work, the right-hander fell against the run-of-play for the second time in the match when in an attempt to sweep Chase, his stumps were rattled.

One wicket brought another for the hosts as Kemar Roach, for the second time in the match accounted for Cheteshwar Pujara. Roach persisted with his wide-angle and got one to nip back sharply into the massive bat-pad gap of Pujara. With two quick wickets gone, Kohli and Rahane buckled down to negate the threat of Roach and finished the session at 3-98 and an overlead of 173 runs.

West Indies needed another inspired spell from Kemar Roach after the Tea break and the fast bowler did not disappoint. The pacer bowled his heart out, beating Kohli and Rahane a million times outside the off-stump but with little luck. The partnership soon crossed the 50-run mark- their 15th as a pair- courtesy two back-to-back boundaries by Rahane off Shannon Gabriel as the lead swelled past 200. 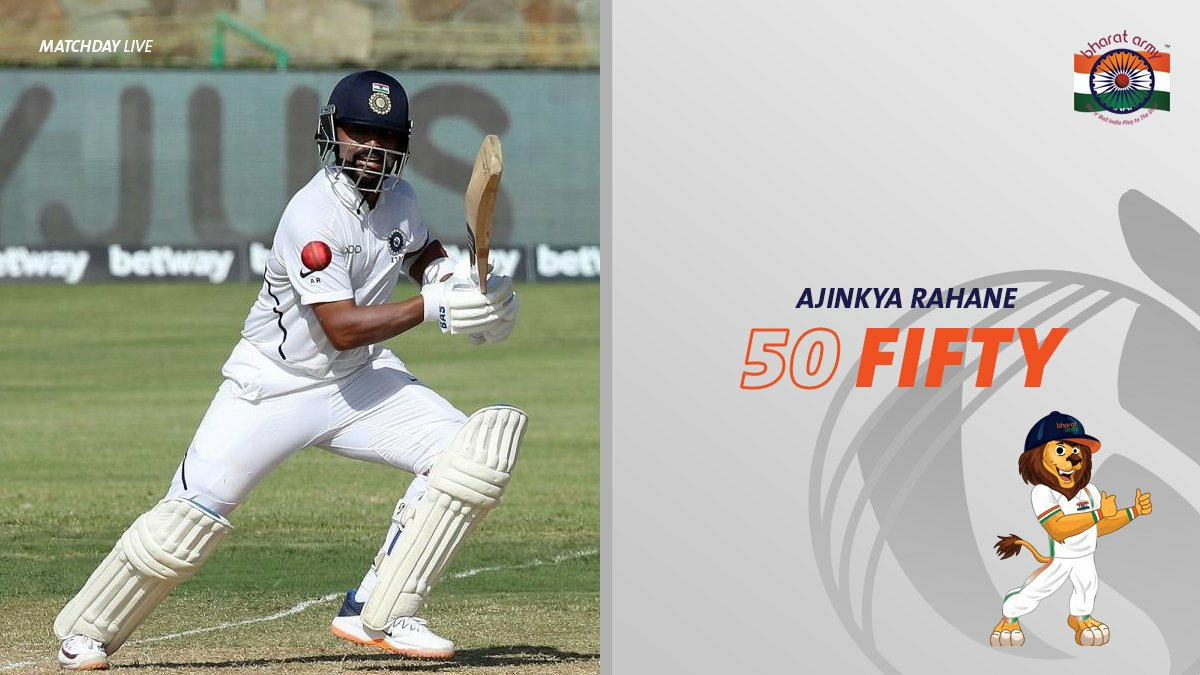 With the pair settling down and the wicket not offering much, West Indies went on the defensive, something which was symbolized by Holder opting to bowl part-timers Brathwaite, John Campbell and off-spinner Chase in tandem as the duo continued to milk the bowl and brick-by-brick bat West Indies out of the game.

With six overs remaining in the day, Holder finally brought Roach back into the attack and the fast bowler very nearly broke the partnership, if only had he reviewed the on-field call for LBW. The Indian vice-captain made the most of his luck and soon completed his second fifty in the match; a feat he has achieved for the fourth time in his career.

Kohli too reached his half-century with a nonchalant pull off Cummins as the partnership crossed the hundred-run mark- the duo's ninth 100+ stand; second-most by an Indian pair behind Pujara and Vijay (10), one that ensured that India went at the close of play firmly in the driving seat with an overall lead of 260 runs.

Player(s) of the day 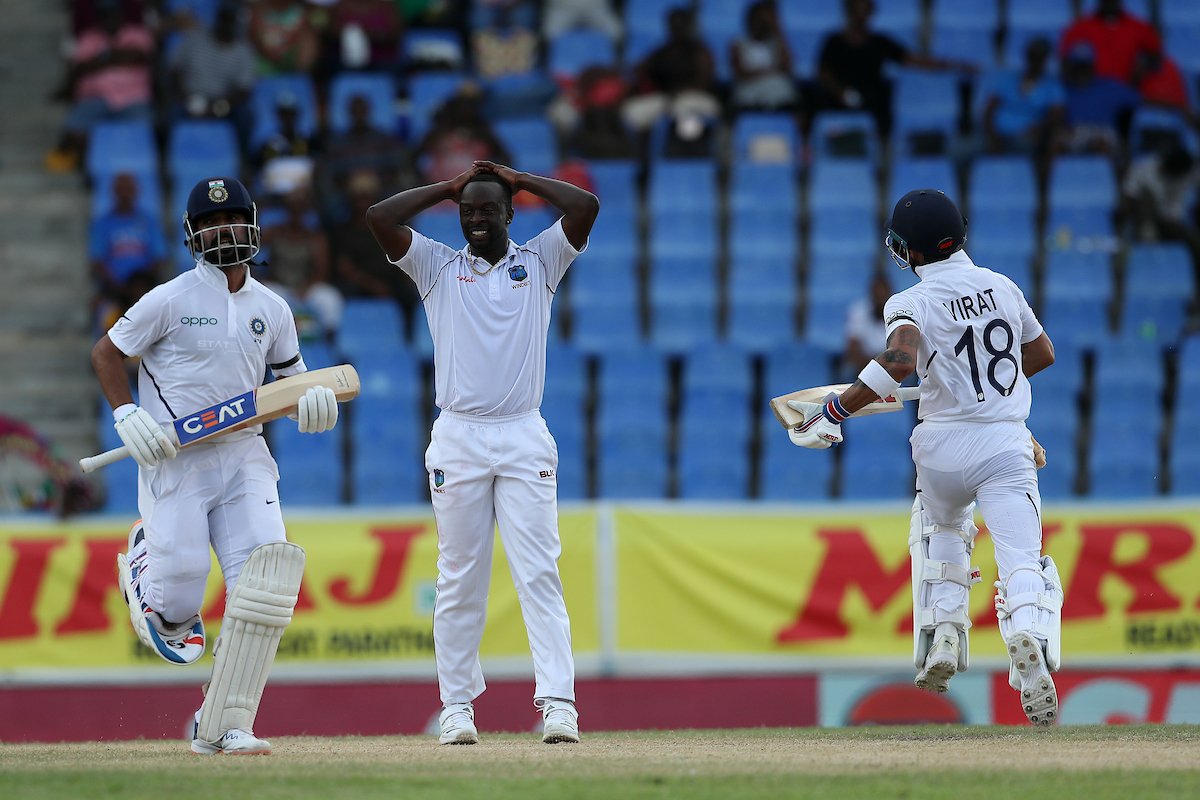 It has to be the duo of Kohli and Rahane. The Indian captain and vice-captain seem to have a penchant for batting in the company of each other. As evident from the below numbers, Kohli and Rahane have been India's most prolific pair in Test cricket in this decade. And, today, they showed why.

The duo came together after India had lost two quick wickets in the form of KL Rahul and Cheteshwar Pujara and needed a rearguard action against the rampaging Kemar Roach. The pair, with a fair share of luck notwithstanding, survived the threat of Roach on both sides of the Tea break and completed their ninth 100+ stand for India in Test cricket.

Moment of the day

It has to go to Kemar Roach (1-18 in 12 overs) for his inspired spell of fast bowling on either side of the Tea break. The fast bowler's battle against Virat Kohli was a sight to behold as the right-hander consistently challenged the Indian captain outside the off-stump for umpteen times.

Roach would have got Rahane in the closing stages of the day, had it not been for another shoddy decision by the umpire and his own decision of opting against the review.

With India already 260 ahead and with seven wickets already in the bag, the tourists will look to bat the Windies completely out of the game. You can expect a lot of fireworks tomorrow if the Windies fail to take wickets in the first session.