"It's a fresh start" Mithali on her relationship with Kaur 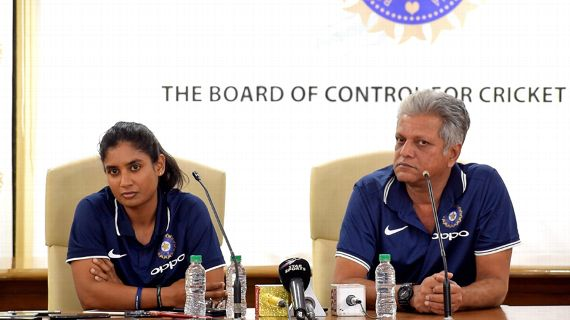 Indian Women Team ODI skipper, Mithali Raj has said that the acrimony that followed her side's semi-final exit in the Women's World Twenty 20 is a thing of the past while acknowledging that the whole saga did "hamper" the profile of the Women's team.

Raj, who had scored two fifties leading into the semi-finals, was unceremoniously dropped from the crucial encounter against England, leading to a massive controversy and a war of words between her and the then Indi coach, Romesh Powar.

"The controversy did hamper women's cricket. I believe when a lot of non-cricketing things are spoken, it's not so good, but we are getting an opportunity where we can again perform and let people talk about the team's performance, and that will only enhance the profile of the sport."

On her relationship with Harmanpreet Kaur

India's T20 captain Harmanpreet Kaur and opener Smriti Mandhana had requested the BCCI to consider Romesh Powar as the coach, suggesting all was not well between Raj and Kaur, but the Indian ODI captain suggested that she and Kaur have "moved on" from the saga.

"It's a fresh start. Coming into the new year, it's a fresh series. Yes, we've moved on. Right now, the focus is on the New Zealand series. As a captain, and as a team, we understand the importance of the [ICC Women's Championship] points system and how important it is to gain those points and get into the 2021 World Cup, and we know where we stand right now on the table. This series is very crucial from that perspective."

"I think both of us have moved on from there," Raj said. "I think too much emphasis has been given to that controversy. It was last year; all of us should look forward to 2019."

"As the one-day captain, it is important for me to get the team together and important that we perform as a unit. Individual brilliance can win you a few matches, but if you have to win a series, you need every core member of your team to perform, and that performance has to complement the team's goal. That is definitely what I believe will get the team together again and that's what we're going to work on.

"At this level, every player understands what it takes to reach this level, and what it takes as a team to go on an overseas tour to aim to win the series, to gain those points. So, even though we might have differences of opinions, when we come down as players, we sit down as a team. It's always to the benefit of the team, and what works for the team is decided by everybody."

During the World Twenty 20, Mithali had stated that the team is now looking well-settled and the event would be her last World Cup in the shortest format of the game. But, on Sunday, she said she hadn't made any definitive plans for the future.

"I will take a series at a time. I don't know where I would be in two-three months from now, so I can't really predict whether I will be part of the 2020 World Cup," she said. "For me, at this juncture, this New Zealand tour is as important, very important in fact, [as to] how it goes for me and for the team, so I am only looking forward to this tour as of now. I can't predict or comment on how it's going to go in the future. That's something I've never planned; it's always been with the flow."

On working with the new coach- WV Raman

Since April 2017, three coaches- Purnima Rau, Tushar Arothe and Powar- have been ousted controversially from the Women's team. Raj reckoned that the appointment of WV Raman, whose previous experience includes stints with Ranji Trophy and IPL sides is a step in the right direction.

"I've not trained under him [Raman], but have met him a couple of times," Raj said. "If you see his credentials, his experience, and expertise, he's played and coached various teams at various levels. There are no expectations as such when you have credentials like that. You are only positive that the coach will make a big difference to the team.

On the challenges that lay ahead

On the cricket field, one of the challenges that confront Raj is her side's lack of experience of playing in New Zealand. Only two of India's current members- Jhulan Goswami [in ODIs] and Raj herself was part of the Women in Blue's last tour of New Zealand in 2006-07. India's form has also been inconsistent in the 50-over format. After reaching the World Cup final in 2017, they won the ODI series in South Africa before losing to Australia comprehensively [0-3] at home. The clean sweep was followed by a 2-1 win over England before they failed to whitewash a lowly-ranked Sri Lanka last September.

"The home series against Australia hasn't gone well for us. We hadn't won a point there," Raj said. "So this series is very important if we can get those six points... Having lost the last game against Sri Lanka also, we lost out on those two points... Playing any side in their home conditions will have its challenges. Yes, Jhulu and I have toured last in 2006, but, over the years, I'm sure New Zealand has also changed."