India's bowlers flexed their muscles to make up for their sides' soft underbelly with the bat [Read: Middle-order], to pave way for the Men in Blue's biggest win (by 125 runs) against the West Indies in World Cup cricket. Defending a relatively modest total of 268, India once again needed their bowlers to be on the top of their mark against an explosive West Indian batting line-up. 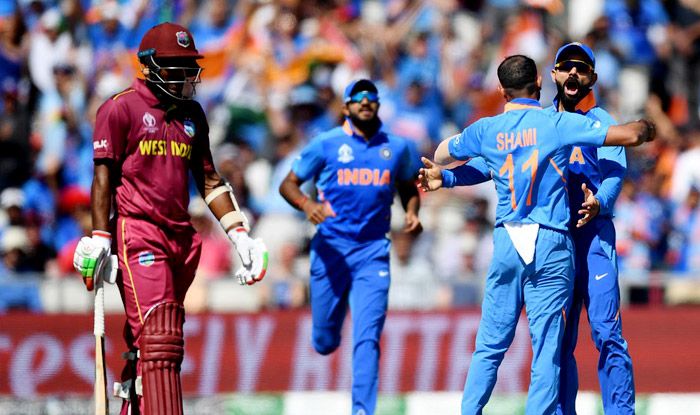 Shami and Bumrah were relentless against the self-proclaimed 'Universe Boss' testing the left-hander with incisive pace and seam during his 19-ball-6. Jasprit Bumrah hit him on the foot with a searing yorker while Mohammad Shami continuously tested him with incisive pace and bounce, eventually getting the better of the Jamaican when he was caught at mid-on while trying to pull.

Mohammad Shami was just outstanding in the first powerplay. The right-hander continued from where he had left against Afghanistan, continuously testing the Windies batters outside the off-stump. He accounted for Hope with an absolute beauty after having been drilled for a boundary off the previous delivery; a perfect inswinger bowled with an upright seam, inducing Hope forward, the ball nipped off the surface to rattle his stumps eventually.

Early wickets peg the Windies back

Two early wickets meant Ambris and Pooran had to rebuild their innings. The first boundary since Hope's dismissal came after 62 ball courtesy Hardik Pandya. Both the batters rod their luck with top-edges falling in no-man's land thrice against Pandya and once against Kuldeep. 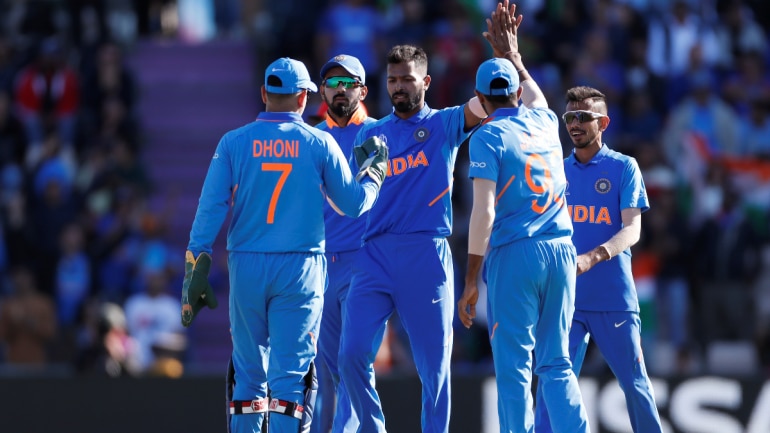 But, just as Ambris and Pooran were threatening to build a solid platform for the West Indies, Pandya trapped Ambris leg-before-wicket to break the 55-run stand between the duo. Shimron Hetmayer survived a few nervy moments initially. After getting a reprieve thanks to MS Dhoni's missed stumping chance, the left-hander survived a close LBW call off Kuldeep Yadav when he decisively challenged the Umpire's decision, only to be saved by the inside-edge.

But Kuldeep's disciplined bowling finally resulted in a lapse in concentration of Nicolas Pooran, who in an attempt to break the shackles holed out at deep mid-off. West Indies 4-80. With conditions ideal for the wrist-spinners, every ball that Kuldeep and Chahal looked like an event, and wickets, an inevitability.

Jason Holder was the next to go when the skipper after having been troubled by Kuldeep in the previous over, was lured into a drive-by Chahal. Holder, unable to come to the pitch of the delivery hit it straight to Jadhav, who was strategically placed at extra-cover.

With the West Indies five down, Kohli brought back Bumrah to go for the kill. And, like always Bumrah didn't disappoint his captain. The fast bowler got rid of Carlos Brathwaite thanks to a diving catch from MS Dhoni before trapping Allen in front to get two-in-two.

The crowd was buzzing at the Old Trafford with the prospect of another Indian bowler hattrick, and Bumrah very nearly got it when he bowled an outstanding slow yorker, only for Roach to keep the bat down in the nick of time. Mohammad Shami (4-16) then proceeded to finish off the proceedings to complete a 125-run for the Men in Blue.

The eventual winning margin looks like it was another one-sided game, and it was, especially in the second half, and India's win should not for once, cover up their soft underbelly with MS Dhoni's struggles at the start of his innings at the heart of it. Also, what about Vijay Shankar's role in the side, especially when he is not being used as a bowling option? After losing Rohit Sharma to a rather controversial decision, skipper Virat Kohli and KL Rahul steadied India's ship with a 69-run stand for the second wicket. But, just like in the game against Afghanistan, the opener failed to convert his start into a three-figure score and was knocked over for 48 by Jason Holder.

Vijay Shankar looked steaky during his 19-ball-14 with the West Indies bowlers testing him with the short-pitch stuff. His stay was eventually ended by Kemar Roach, who got two wickets in his comeback spell, including that of Jadhav's (7). With India in a spot of bother at 4-140, Kohli [72] and Dhoni needed to steady the ship. 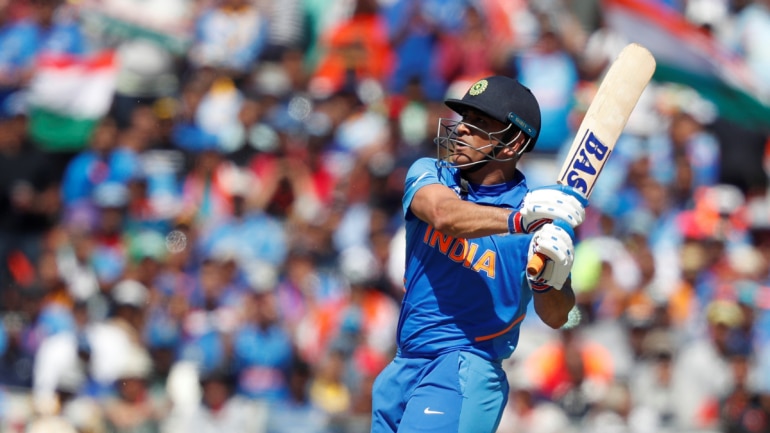 Dhoni, who survived a stumping scare when Shai Hope made a mess of the opportunity, once again struggled to rotate the strike against the spinners. His first 20 runs came off 40 balls, putting the pressure on Virat Kohli to up the ante. It eventually led to his undoing, when he holed out at short midwicket but not before he had scaled the Mount. 20,000 in International cricket.

Hardik Pandya's 38-ball 46 gave a much-needed momentum to the Indian innings, taking the score past 250 before vintage MS Dhoni finally turned up in the final over to take the score to 268. The win against the West Indies has consolidated India's position in the points table (10 points after 6 games), but if they are to win this tournament, they must do something about that soft underbelly. That middle-order. It could prove to be their nemesis, come the finals or the semi-finals