The Indian team completed a comprehensive victory over South Africa as they thrashed the visiting side by a margin of 3-0, with the series finally concluding after the rout at Ranchi where the encounter finished within the first 10 minutes of the fourth day’s play. It was a series where the South African spirit fizzled out eventually, with intense criticism being lamented at their dampening confidence and the lack of fight as the matches progressed. Here, we completely overview the entire three-match series. 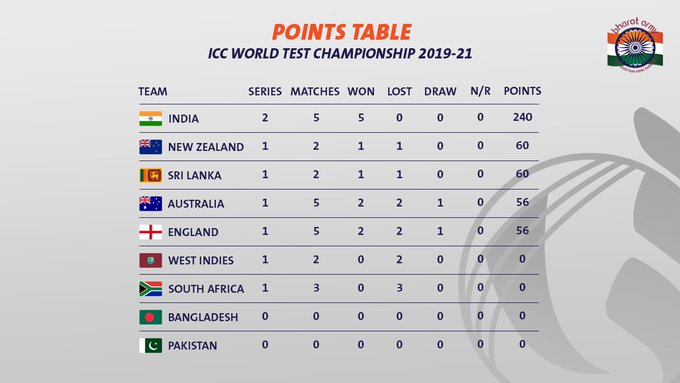 Team India is currently atop the World Test Championship rankings. 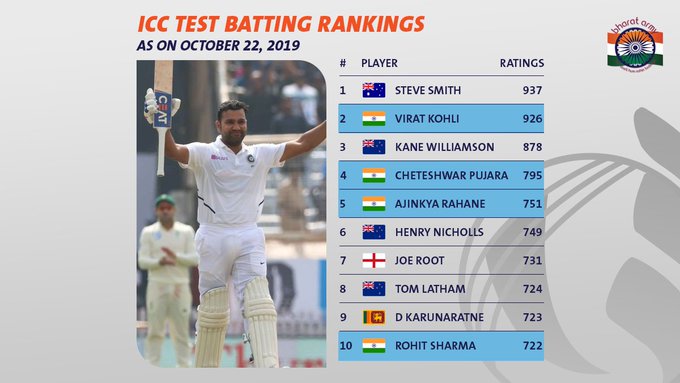 Rohit Sharma broke into the top 10 of the ICC Test batsman rankings.

The entire talk and attention ahead of the series was focused on Rohit Sharma’s promotion at the top of the order in Test cricket and he answered all the critics in some tremendous style with three centuries that included a double century in Ranchi as well. Sharma has been in an excellent run of form in recent times, including the wonderful outings that he had in the World Cup. However, here, he showcased his skill, temperament and the natural talent to succeed in the Test format as well as he finished off the series with 529 runs from merely four innings at an average of 132.25.

Even Ravichandran Ashwin’s position in the Indian Test circuit seemed to be a bit uncertain in the buildup to the series as the veteran off-spinner did not feature in the Test matches that the Indian team played in the Caribbean. However, Ashwin marked his return with an incredible seven-wicket haul in Vizag and backed it up with consistent performances in the next couple of Tests where he rolled over the Proteas with some exceptional bowling including the deliveries where he notched the dismissal of Quinton de Kock and some other visiting players. With 15 wickets eventually, Ashwin has provided a gentle reminder of the giant of a cricketer that he is in India. 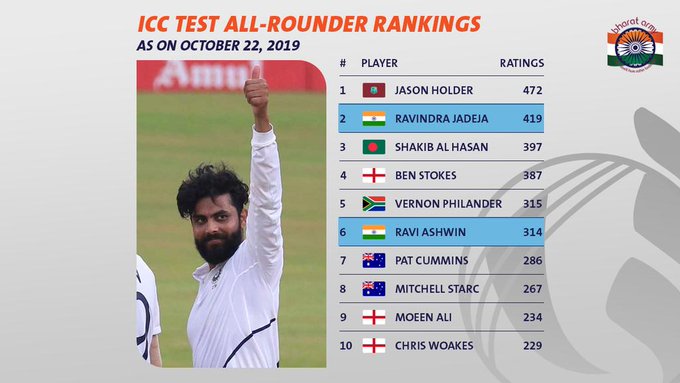 Jadeja climbed to the second spot in the ICC Test all-rounder rankings.

Whilst Jadeja had always been a critical figure with the ball for the Indian side, his stature as a batsman only enhanced as the management looked to fully integrate him in the number six position. The southpaw wasn’t at his destructive best as such as the batsman, but rather tried to accumulate and pile up runs at a consistent basis whilst also delivering the fitting blows in terms of boundaries whenever the need arose. His scores read 30, 40, 91 and 51; the first two coming at a time when the side needed some good acceleration whilst he played the second fiddle for the majority of the time in the final two knocks. Irrespective of the scores, the conviction with which he batted against bowlers of all kinds in various game situations and displayed his mettle with the willow was laudable. With the ball, he dismissed the batsmen 13 times and was at his consistent best as usual.

It was important for Rohit Sharma to make a credible statement upfront with the bat, and he wasted no time as he got in the groove with a pair of centuries in the first match at Vizag itself. However, the knock in the first innings would probably be remembered more by the player himself, considering the situation that it was scored in. Though the conditions for batting was relatively easier, but to face a fully-fresh bowling attack right on the first day of the Test match and battle out the initial phase of tentativeness to rack up runs in abundance in both innings of the encounter demands some serious temperament and Rohit displayed that completely in that particular match; especially, the first innings. 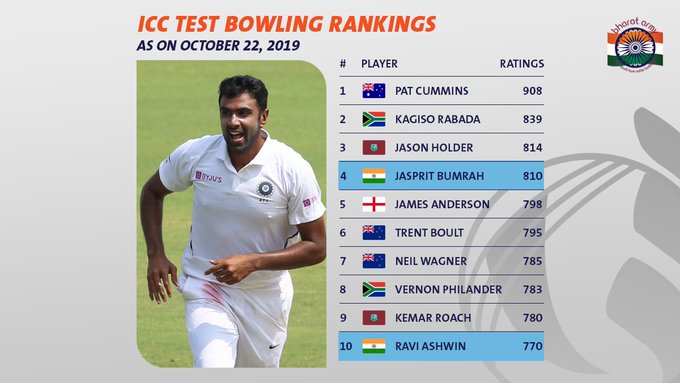 Ashwin had entered this series with a lot of doubt cast over his future as an Indian international. Despite being a colossal figure for the national team over the past few years, it had become an increasingly important series for him to stake his claim and reinstate his prominence in the cricketing circuit. With a brilliant seven-wicket display in the first innings at Vizag, Ashwin returned to the second essay with the single agenda to complete his 350th scalp, a landmark feat in a record number of matches. Theunis de Bruyn was the victim to Ashwin’s delivery, and that further helped the off-spinner to further tighten his grip over his spot in the XI as his commendable performances continued thereafter.

Mayank Agarwal, as we have stressed earlier as well, is the most well-defined product to Indian cricket’s toilsome domestic structure. Agarwal grinded it out the hard way and spent rigorous hours in the domestic circuit and fought his way into the national team’s XI. Once he finally was drafted in the side, Mayank has refused to look back ever since with a century in Vizag and then doubled it up with a double century at Pune. The MCA Stadium holds a special place in his career as it was this very place where he resurrected his falling career with a triple century in the 2017/18 Ranji Trophy season and hence Agarwal made the best use of this auspicious occasion with a stellar performance to reach his double century after having survived the initial phase of fearsome fast bowling in the first day of the match.

Some Important Statistics from the Series:

There were 65 sixes hit in the Test series, which is the joint-most in any Test series alongside the 2013/14 Ashes hosted by Australia.

Definitely, Rohit Sharma’s promotion to open the batting has a vital role to play behind this particular statistic! 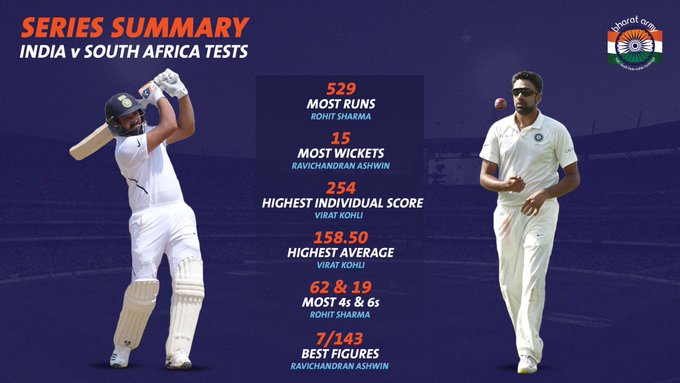 Rohit Sharma became the fifth Indian opener with two 150-plus scores in a Test series. Rohit Sharma is the only Indian player to complete a double ton in Tests with a six.

It seemed like Rohit was keen to do justice to the comparisons made with Virender Sehwag in relation to him opening the batting and did so in the same swagger as well!

Despite all the criticism directed towards Umesh, it would be silly to rule out his magnificent role in the Indian pace-bowling department in the Test format, especially those at home ever since the home season of 2016/17.

What Next for Team India?

The South African side now has a good break of almost a month and a half in which they can rethink and make some rejigs to bring their cricketing structure and attitude back in shape before the four-match Test series begins against England in late December.

On the other hand, the Indian team awaits the visit of the touring Bangladeshis after Diwali for a T20I and Test series, which is currently under threat due to the indefinite break that several Bangladeshi players have announced due to their rising conflicts with the cricketing board.