India rolled over the Bangladeshi side in the first Test match of the series at Indore in a convincing performance as the match got done within less than three days. True to the issues that we raised in our pre-match preview, the neighbors failed to adjust to India’s fiery pace bowling attack and succumbed to the waves of pressure enforced upon them in the process. 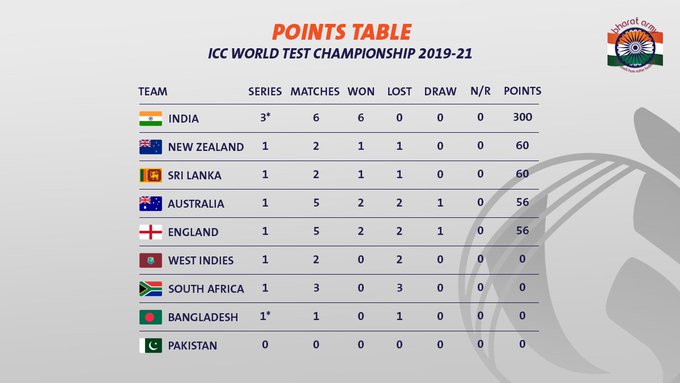 The World Test Championships Table after the Indore Test match.

The Indian team accordingly gets to rest for two extra days ahead of the second Test match in Kolkata, which would be a boon to their pacers who toiled hard by bowling in two continuous innings in this particular match. The spinners were cast aside to a secondary role in the final innings of the match, an exercise that has been rather rare to witness in the longest format of the game and that is a testament to how brilliantly India’s pacers have improved over the years. 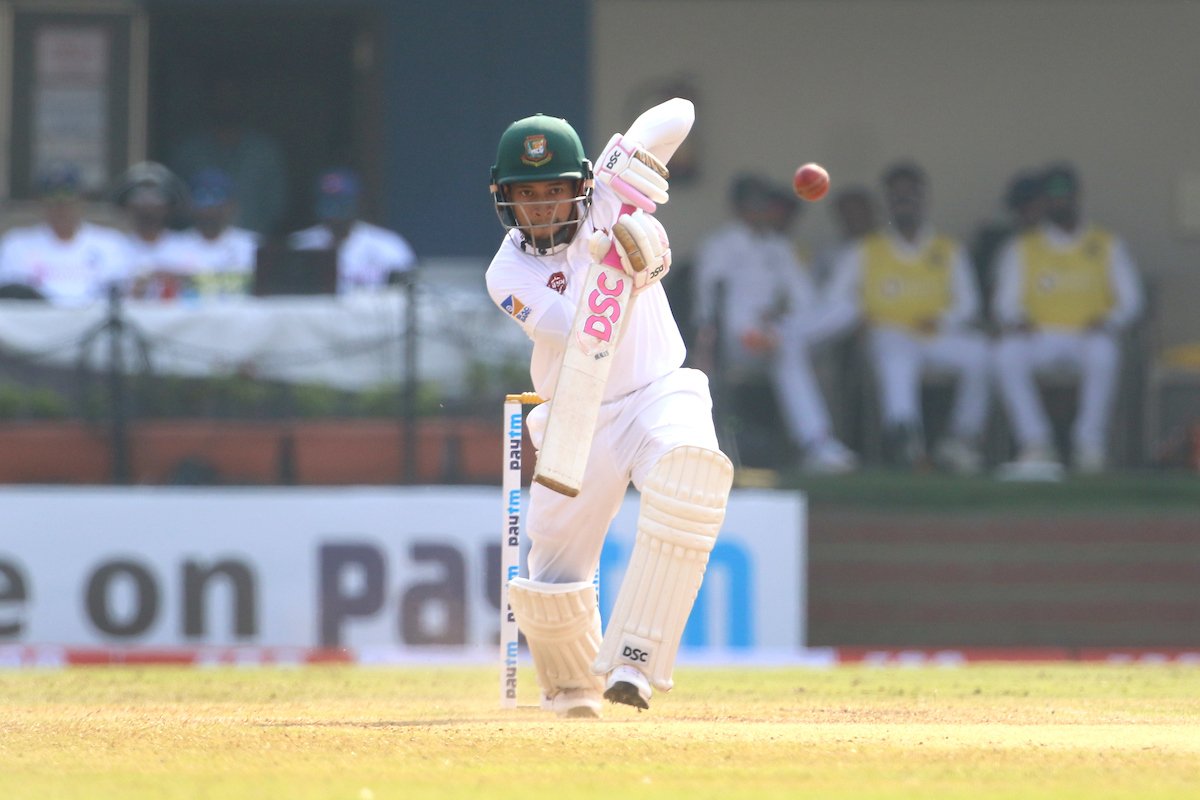 The key to success for any visiting side in India is to first build a good enough batting base and then pile runs upon that after weathering the storm in the first hour of the day. Shadman Islam and Imrul Kayes were prey to this as they were both dismissed pretty early in the game and both of them added only six runs each. Pretty much none of the Bangladeshi batsmen were able to demonstrate the temperament required to dig deeper and do the hard yards to keep the Indian bowlers at bay. Mushfiqur Rahim added 43 runs at a brisk pace and Mominul Haque partnered him well too to take them to a partly total of 150 runs eventually. Ajinkya Rahane dropped three catches and that was the only negative highlight of India’s gameplay that day as otherwise, they were way too clinical in their approach  with Mohammed Shami snatching three wickets and Ishant Sharma, Umesh Yadav and Ravichandran Ashwin finishing with a couple of scalps each.

Rohit Sharma and Virat Kohli was dismissed for a total of six runs only, but despite that, the Indian side was able to rack up 493 runs and the majority of that credit deserves to go to Mayank Agarwal whose purple patch continued as he scored 243 runs in the innings. Agarwal’s sheer dominance against the spinners was a treat to watch as he smoked away eight sixes, 28 boundaries and played 330 deliveries to reach to the second double century of his Test career. Not many cricketers in recent times have made their opportunities count as well as Mayank has and it has been a sheer satisfaction to watch him succeed so well in international cricket. Cheteshwar Pujara scored 54 runs but had looked well set to pile up even more. Rahane’s stroke-play in his knock of 86 was a complete delight to watch as well before Ravindra Jadeja continued his flawless form with the willow to finish with an unbeaten score of 60 runs. Umesh Yadav entertained the crowd with his 25 runs off 10 deliveries in the end too as the Indian side declared overnight after adding seven short of 500 runs to the board. 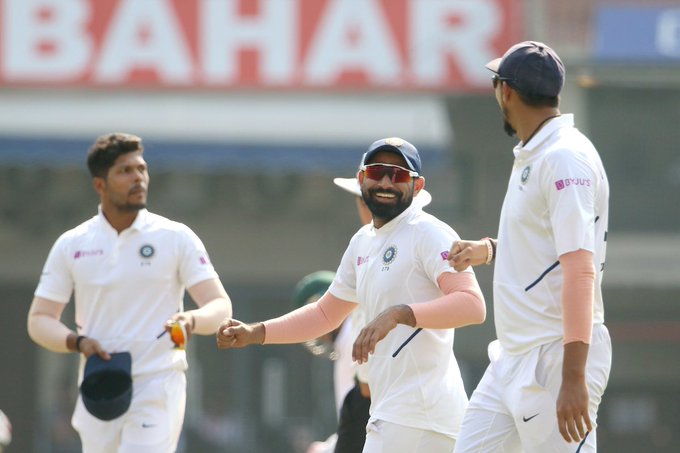 The Indian bowling stole the show once again. Image: BCCI

There was little to talk for Bangladesh in their second innings as the shoulders already looked to have dropped and the Indian pacers’ relentless pursuit meant that they were left with feeble options other than to try and extend the misery for as long as possible. Ishant, Shami, and Umesh fired with all cylinders and ensured that no trick in their sleeve was left unused in addition to maintaining the consistency required to succeed as a fast bowler in the longest format of the game as well. Like in the first innings, the top-order did little of note but Rahim tried to stick around and played 150 deliveries for his hard-fought 64. He was the only one who at least looked adept at delaying the inevitable but Shami was the one who called all shots right as he finished with four wickets in the innings and those were really important ones. Ashwin returned to action in the fag end of the innings to avoid the chance of any lower-order resistance he scalped three wickets in the last phase of the innings and thus completed India’s peerless performance in this Test match.

As we have reiterated numerous times earlier, Mayank Agarwal’s seamless transition and success in Tests is a testament to India’s well-constructed domestic structure. A player who was denied opportunities several times before in favor of other talents have made sure that he polishes every chance that he gets perfectly enough to cement his spot in the side for a very long time. In the second consecutive series running, Agarwal has notched a double century as with the single-willed determination, concentration and the undying passion with which he plays the game; there are plenty of them to follow this exquisite knock. 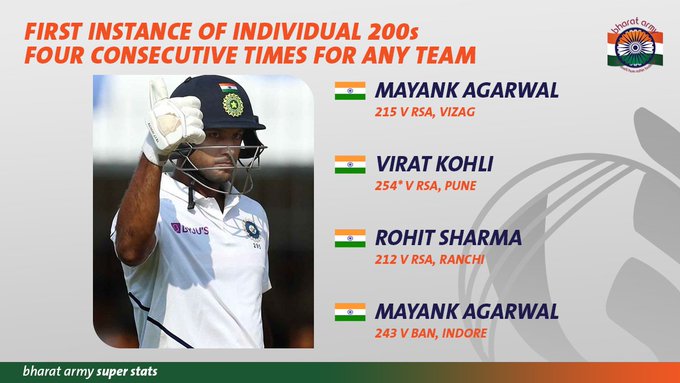 Stats from the Match:

1. It was a very rare occasion in today’s play when in the first session of a Test match at home; all the overs were bowled by the pacers.

2.Ajinkya Rahane added another feather to his cap as during his masterful innings of 86 runs, he also crossed the mark of 4000 runs in his Test career.

From here, the Indian and Bangladeshi side would head to the Eden Gardens that would host our country’s first-ever pink-ball day-night Test match. The game would commence from the 22nd of November at 1 PM IST and would make up for another interesting watch.