March 12, 2001. Eden Gardens, Kolkata. It is the evening session of the 2nd Border-Gavaskar Trophy Test. Australia has thus far dominated proceedings since the first day of the series.
They steamrolled India by 10 wickets in Mumbai and in the absence of Javagal Srinath and Anil Kumble, they had breezed their way to 2/200 in just over two sessions in Kolkata. The Indian bowling looked toothless and another huge first innings score by Australia looked like a mere formality.
Not able to take the pain anymore, I switched off the television and went outside to play with my friends. I was 7 years old. After 30 minutes, my elder brother screams in excitement from the balcony, asking me to come back.
He didn't tell me what had happened. As I rushed back, I couldn't believe my eyes. All of a sudden, the Aussies were reduced to 7/252 with a skinny young spinner in Harbhajan Singh running past their middle-order.
Harbhajan had just become the first Indian to take a Test hat-trick with Ricky Ponting, Adam Gilchrist, Shane Warne being his victims.
Four days and a masterclass from VVS Laxman and Rahul Dravid later, India was in desperate need of wickets in the final session of the Test match to enforce a result.
Once again, it is Harbhajan Singh, who rises to the occasion, picking 6/73 including the last wicket of Glenn McGrath in the closing stages of the match to send the entire nation into a frenzy.
A few days later, he backs it up with a 15-wicket-haul in Chennai and if that's not enough, he plays a crucial role with the bat alongside Sameer Dighe and hits the winning runs to lead India to a series win for the ages.
Why am I writing all this, you'd wonder? We all know what Harbhajan did in BGT 2001. It's well documented. So what's the point?
Yeah, fair enough. But citing BGT 2001 example was necessary for understanding the freak that was the 'turbanator'
I'll explain that in a bit.
Over the last 70-80 years, Indian cricket has been blessed with plenty of match-winners, many you'd argue were even better than Harbhajan but what made Bhajji a different beast was the street fighter attitude that he brought to Indian cricket.
Very few can lay a claim to that. 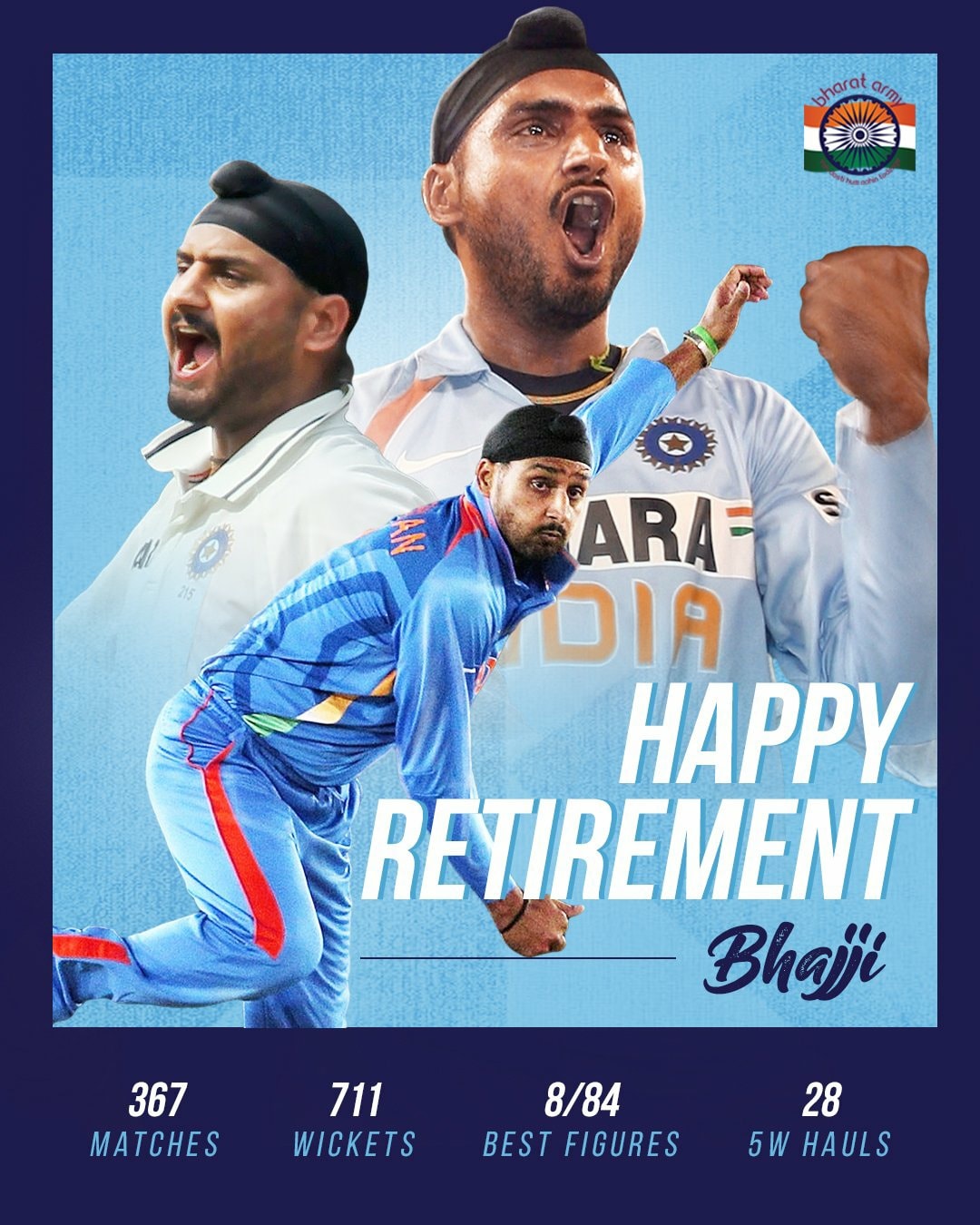 Harbhajan made his international debut in 1998 but soon found himself out of favour. Then in 2000, he got thrown out of the National Cricket Academy due to disciplinary issues. Things got worse when his father tragically passed away during the same year.
With his career at crossroads and the burden of financially supporting his family, he decided to quit the game he loved and move to Canada to become a truck driver.
Thankfully his sisters managed to persuade him against the decision, urging him to work harder on his cricket.
Harbhajan took 28 wickets in 5 matches at an average of just 13.96 in the Ranji Trophy later that season and with Anil Kumble getting ruled out of the Border-Gavaskar Trophy due to injury, it opened up a golden opportunity for the 'turbanator'
But, selectors still weren't keen on him because of his past skirmishes. It took an adamant skipper in Sourav Ganguly to persuade the selection committee in favor of the off-spinner.
Harbhajan had finally got an elusive opportunity to showcase his worth. But he also knew that it was his last chance. If he fails, then it's curtains.
What made the task even more challenging was that he was up against a GOAT batting line-up at the peak of its powers.
But, in hindsight, if you think of it, it was a tailor-made situation for Harbhajan because he was someone who had already faced far bigger challenges in real life up until that point.
Adversity tends to bring out a beast in some individuals and that is exactly what happened in the case of Harbhajan. He claimed 32 wickets in 3 games and never really looked back after that.
More than the numbers, it was his street-fighter attitude, the never-say-die spirit despite being put in the deepest of corners, that stood out for me during that historic series.
And over the next decade, that is something that made Harbhajan such a unique Indian cricketer.
And perhaps that is the reason why he always thrived whenever India found themselves in a precarious situation- with both bat and ball.
A crucial cameo during the NatWest Trophy final? Check. Match-winning knock against Shoaib & co in the 2010 Asia Cup? Check. Dismissing Morne Morkel in the dying moments of the Kolkata Test in 2010? Check. Scoring a Test ton (back-to-back) to rescue India from 15/5 in a home Test? Check.
That yorker to Michael Clarke in the 2007 T20 WC semi and that delivery to Umar Akmal in the 2011 WC semi to kill both games then and there? Check. Check. Check.
In many ways, Harbhajan was one of the first few poster boys of a liberalized, more confident 21st century India, who wore his heart on his sleeve, was unapologetic and someone who just didn't care about the reputation of the opposition, especially Australia.
The way he strolled out on the WACA with the tri-color in his hand following India's historic win in the wake of the Monkeygate scandal and let out a guttural roar in the den of the opposition epitomised his character perfectly.
His career didn't end as it should have. He went into the wilderness post the 2011 World Cup for a variety of reasons, none more prominent than his decline as an attacking bowler and the rise of Ashwin.
The starting wasn't good, neither was the end, but in between, Singh gave us a lot of reasons to rejoice with pride and ecstasy.
But more than all the cricketing achievements, it was his feisty, unapologetic Indian attitude that will forever remain his greatest legacy.