Fighter Yuvraj walks into the sunset

India's all-rounder and one of the chief architects of two of the sides' most significant victories in their history [WT20 2007 & 2011 WC], Yuvraj Singh announced his retirement today, bringing an end to a colossal 19-year-old career. In a career spanning nearly two decades, the Indian all-rounder played a total of 40 Tests, 304 ODIs and 58 T20Is and finished as one of the greatest white-ball cricketers of all times.

Yuvraj zoomed into reckoning after his sensational returns in the 2000 U-19 World Cup where he won the 'Player of the Tournament' award after helping India win the title. His heists at the U-19 World Cup was just an indication of Yuvraj's big-match temperament; one that would come to India's fore several times in years to follow.

Following his heads turning performance in the U-19 World Cup [203 runs + 12 wickets] in 2000, Yuvi earned his maiden call-up to the national side in that year's ICC Knockout [Champions] Trophy. And, it did not take long for the southpaw to make an instant impact of his precocious all-round talent. Coming into bat against the likes of McGrath, Lee, and Gillespie, Yuvraj gave an account of his irresistible timing and bat lift. Not to forget his gun fielding. Yuvi scored a match-winning 84 to peg the Aussies back and backed it up with a brilliant diving catch at short cover. 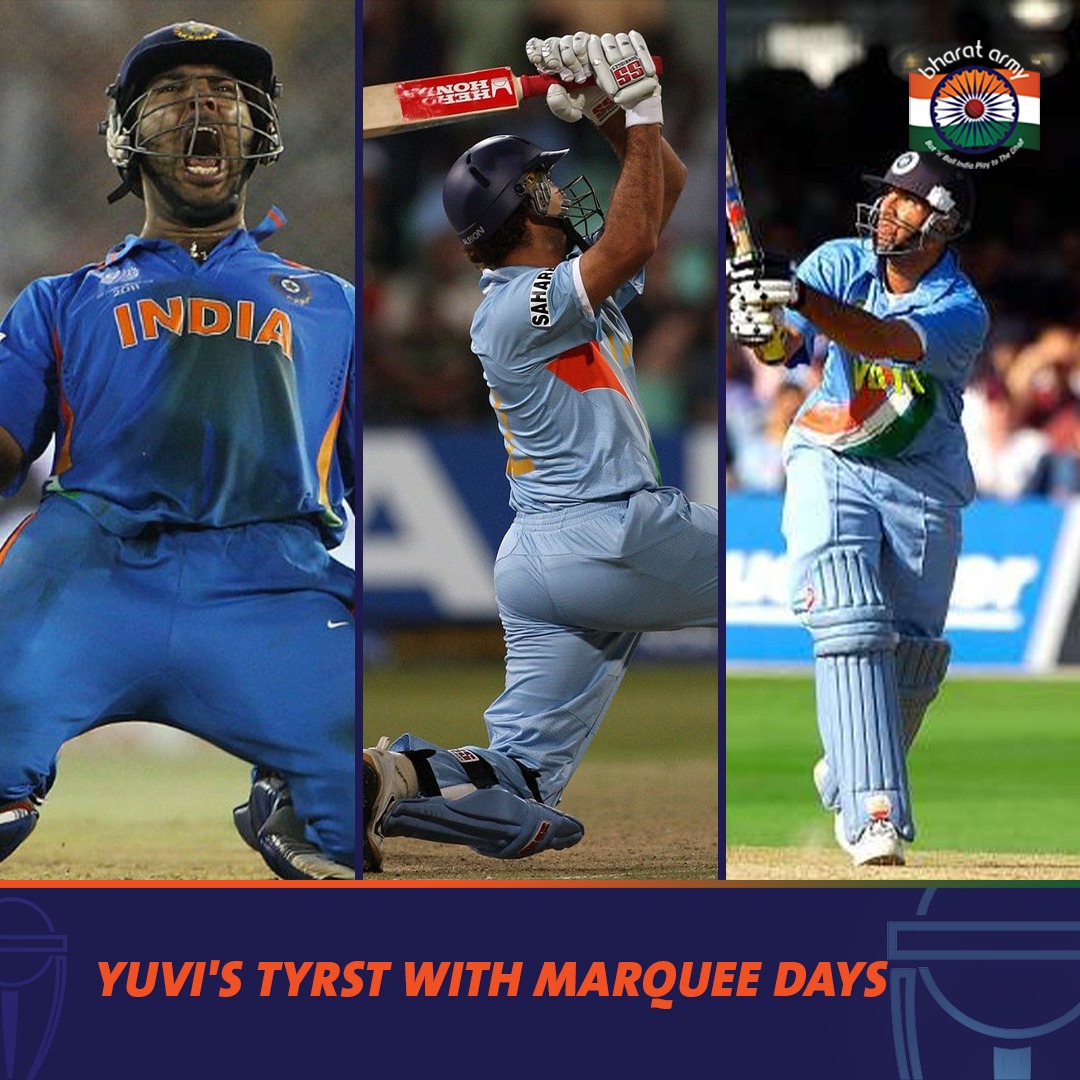 One of the things that often led to India's undoing prior to Yuvraj's entry in the Indian side was their overreliance on their top-order. Every time the top-order would fail, there would be an inevitability about the eventual outcome. Secondly, India's fielding. It all changed once Yuvraj made his mark into the Indian set-up. Firstly, with Mohammad Kaif and then with the likes of Raina and Dhoni, Yuvraj formed the heart of India's middle-order in the first decade of the 2000s. With him fielding at point, and Kaif/Raina at cover-point, India had their own version of Jonty Rhodes and Herschelle Gibbs.

With Yuvraj and Kaid diving to save a run or for completing a catch, it brought about a fielding revolution in Indian cricket; one which we see today. But, Yuvraj's biggest strength despite his precocious talent was his mindset and temperament.

Think back to all the great victories that India achieved in white-ball cricket in the 2000s, and one name would be constant in almost all of them- Yuvraj Singh. Think back to the knockout game against Australia in 2000 or the Natwest Trophy final in 2002 or the 2003 World Cup game against Pakistan or India's 4-2 drubbing of Pakistan in 2006 or that semi-final victory against Australia in 2007 WT20 where he smashed a 30-ball-70 or the entire 2011 World Cup where he smashed both the bowlers as well as his disease, and Yuvraj Singh will make his imposing presence felt in all of them.

Yuvraj's heist in South Africa where he accumulated 148 runs including a 30-ball-70 against the Aussies and off-course the six 6s against Stuart Broad, played a major part in India winning the inaugural WT20 in 2007 and the performance was only trumped four years later in the 2011 World Cup. Battling with poor form and injuries leading into the tournament, Yuvraj once again gave an account of his steely temperament.

With both bat and ball, Yuvraj took India's campaign by the scruff of its neck, scoring 362 runs at 90.75 besides claiming 15 wickets at 25.13. His unbeaten 57 against Australia in the quarter-finals and the guttural roar that ensued was a reflection of how much Yuvraj wanted to win the World Cup.

And, it was fitting that when MS Dhoni stroked that winning six in the finals, Yuvraj was at the non-striker's end. And the emotions that ensued were incredible. Everyone cried. Even the ever-so-vibrant and fun-loving Yuvraj was on his knees crying. Those were tears of joy. Those were tears of realization that despite all the odds (form and illness) stacked against him, he managed to put it all past him.

It all seemed like a fairytale. Except, it wasn't. Months after playing a substantial part in India's World Cup win, Yuvraj was diagnosed with a rare form of lung cancer, for which he underwent treatment in America.

But, Yuvraj's never-say-die-spirit once again came to the fore once again and within a year, the left-hander made his return to International cricket. He may not have been the same player after the life-threatening illness but Yuvraj, like a fighter he is, continued to fight.

And, the fans never left him. Every time he would hit a slog sweep or a cover-drive with his typical bat lift, the fans would rally around with social media campaigns for the Southpaw's inclusion in the national side. Yuvraj may have never been able to replicate his pre-2011 form since his return from cancer but the fact that he still continued to fight despite all the odds heavily stacked against him, made him a folk hero, one that will live in the hearts of every cricket fan till the time this beautiful game is played.