Deodhar Trophy: A stepping stone towards the brighter days

Historically, Deodhar Trophy has persistently been shoved to the sidelines in terms of fan-following and response generated as compared to the other domestic tournaments that take place in the country. It used to be a zone-based competition in the past, with the North Zone emerging as the most successful side with 13 tournament victories overall. From the 2015-16 season though, the format has been changed on a couple of occasions, including this season’s one when the players from all parts of the countries were constituted together in squads termed as India ‘A’, India ‘B’ and India ‘C’.

In retrospect and upon deeper thought, tournaments like these are more of assessing the individual brilliance of the best performers in the domestic circuit rather than determining how they perform together as a team. Hence, it serves as a paradox to a certain extent as the matches always run a risk of players preferring to display their personal prowess as cricketers in a more prominent way rather than playing according to the demands of the team. Particularly, a team sport should ideally be about how each individual contributes to their capacity and fill in the gaps generally required to construct a well-functioning and oiled group unit.

However, tournaments like these also provide the perfect platform to pit the best players below the top layer in the country against each other and see how they perform. Often in state-based tournaments like the Ranji Trophy and Vijay Hazare Trophy, the focus is always imposed upon those few star players from each state and hence whatever they do, succeed or fail, it is multiplied to manifolds and projected in front of the masses. It could turn out to be a bit misleading at times. Here, you have the most skilled players competing against each other, and hence there is an equal opportunity, and opposition as well for each one thus presenting a brilliant stage to completely gauge the skillset of any particular player.

The best players of the Deodhar Trophy this season:

In the recently concluded tournament, there are many players who shone apart but Shubman Gill and Mayank Agarwal bagged the most of the headlines early on with their centuries in the same innings. Agarwal scored 120 runs whilst Gill notched 143 of them in India C’s match against India A. Both these batsmen are definitely in the Indian team’s radar and have made it incredibly difficult for the decision-makers to ignore from selecting them in the limited-overs setup anytime soon. However, given how balanced India’s top-three has been since 2013, it has become quite difficult for any of these players to displace any of them to make a place for themselves in white-ball cricket.

Nonetheless, Gill and Agarwal have been in the limelight definitely in recent times. However, Baba Aparajith’s case deserves an equal amount of attention as well. The lad from Tamil Nadu has been briskly racking up runs aplenty in the domestic circuit and also finished as one of the top-scorer of the Vijay Hazare Trophy with 598 runs in his kitty. Here too, he scored a century in the very first match and backed it up with a half-century in the second game for his team. The 101 runs that he scored against India A show that he carried his touch from the previous tournament to this one, and hence should deserve much more of the public glare so that the selectors take notice of how impressive Baba has been in recent times with the willow. 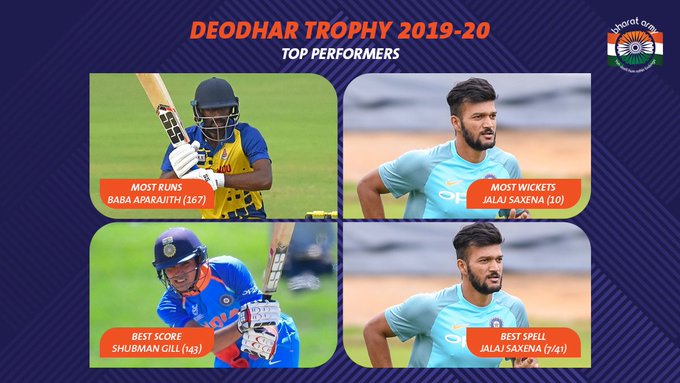 There have been some standout performers in the Deodhar Trophy this season.

Ravichandran Ashwin scalped three dismissals in his two matches at an economy rate of 4.85, as the veteran off-spinner continues to stake his claim to make a comeback in the white-ball circuit. However, shifting away from mere numbers for some time, there were some massively impactful performances that definitely do not deserve to miss a mention. Firstly, Suryakumar Yadav’s went absolute bonkers upon the India A bowlers as he assaulted them for 72 runs in merely 29 deliveries in an innings that included nine boundaries and four sixes. As the Indian team is looking for some powerful performers who can change and overturn the course of the game within a matter of few overs, especially with the World T20 coming up, Yadav is definitely a name who springs some innate excitement. Moreover, he has grinded it out for years in the domestic cricket and has now remodeled and added new dimensions to his overall gameplay to become a laudably versatile batsman in the offing.

Krishnappa Gowtham too had endured an excellent Karnataka Premier League where he got an opportunity to bat higher up the order. But here, he further demonstrated his prowess as an all-rounder with two quick knocks of 19 runs off 8 deliveries and 35 runs off 10 balls (in the final), to provide his team an excellent late flourish into the innings. Moreover, he is extremely handy with the ball and manages to maintain stringent lines whilst bowling to plug the flow of runs. These two players might not top the run-charts, but their ability to carve a noticeable impact upon the game is something that must be cherished and further rewarded with greater opportunities in the future. 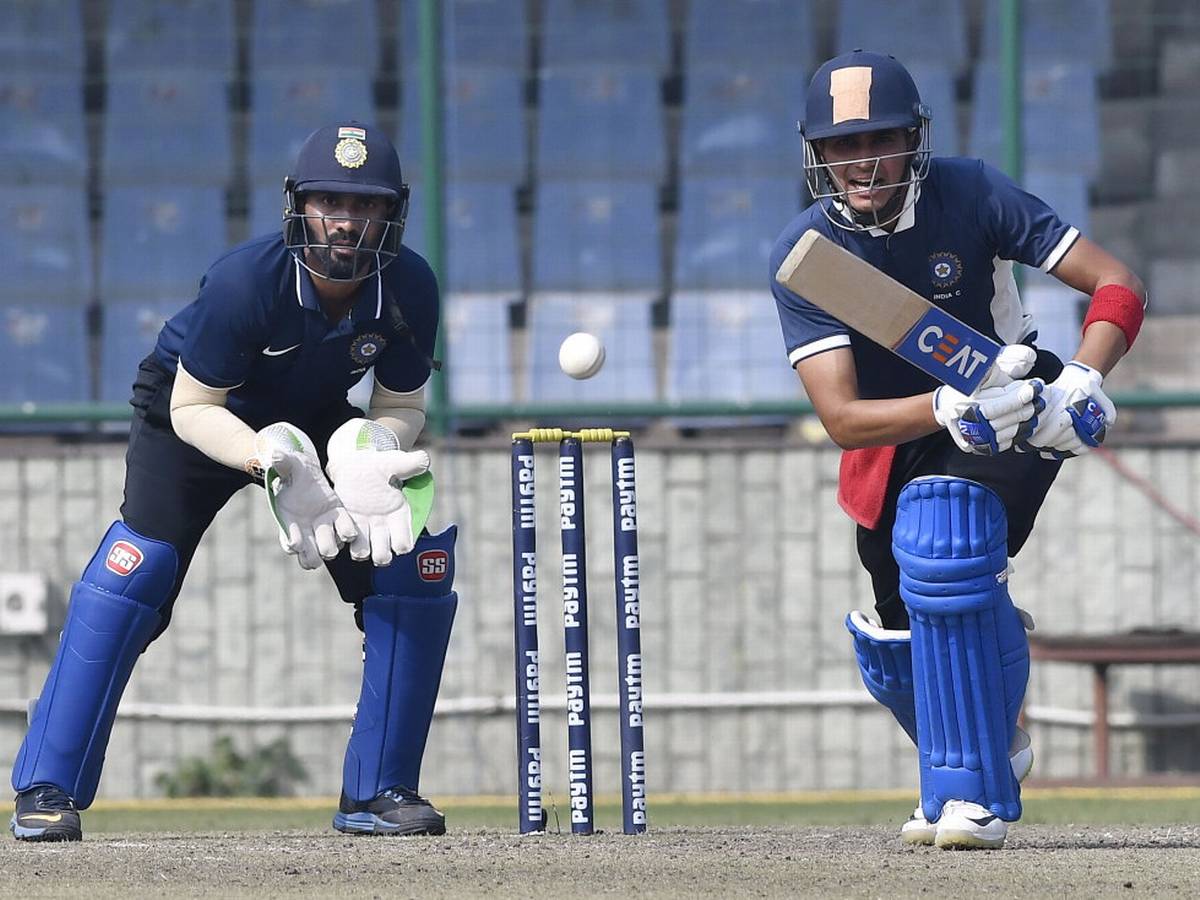 Shubman Gill broke Kohli's record to become the youngest captain to lead his team to a domestic final. Image: The Hindu

Jalaj Saxena has displayed his displeasure over not getting an India call-up in recent times but he never fails to back them up with his outings on the field. In the second match of the tournament, he bagged up seven wickets in 9.5 overs and completely broke the back of India A’s batting lineup.

Hence, despite my earlier claims regarding individual performances trumping the overall combination play of a team in general, it has to be cherished that there are certain players who manage to justify this somewhat unnatural dynamic of the tournament. Their own personal talent and performances on the ground are so phenomenal that one can put aside any apprehensions regarding this competition. Eventually, these tournaments are supposed to be a qualitative supply-chain to the senior team, a task that  seems to be carrying out to perfection as of now.