India looked anything but rusty after into their first World Cup encounter against the Proteas. The Men in Blue- led by a disciplined bowling attack and Rohit Sharma's calm-and-composed innings- kicked off their World Cup campaign with a commanding seven-wicket win to inflict a third consecutive loss on the South Africans. 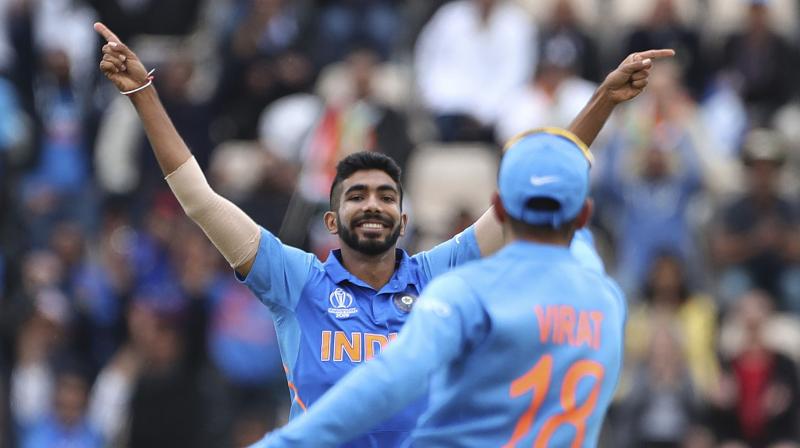 Jasprit Bumrah's first over of the World Cup to Quinton de Kock was a vindication of why he is the best bowler in the world currently.

The Indian fast bowler challenged his Mumbai Indians' teammate De Kock's outside edge with his back-of-a-length line consistently. Bumrah made beautiful use of the angles and the bounce that was on offer to trouble both Amla and de Kock.

He drew first blood by completely squaring up Hashim Amla before Quinton de Kock was out while chasing a wide delivery after being previously cramped for a room outside the off-stump. With figures of 2-13 in his opening spell, it was a statement of sorts from Jasprit Bumrah that set the ball rolling for Team India in the first ten overs.

The Proteas dance to the tune of the wrist-spinners But Chahal proved to be the enforcer for Team India. The leggie made subtle use of his variations and made the Proteas dance to its tune. His first victim was Rassie van der Dussen, who was done in by the flight on the ball that went on to nail the middle-stump. Faf du Plessis troubled stay at the crease ended soon as Chahal bamboozled the South African skipper with a slider in the same over. The memories of the 5-1 drubbing had started to feel real again.

\Kuldeep Yadav pinned JP Duminy on the backfoot with yet another googly to leave the Proteas reeling at 5-89. India slacked off a bit when Kohli bowled Kedar Jadhav for four overs on the trot allowing Miller [31] and Phehlukwayo [34] to stitch a 46-run stand or the sixth wicket. The wicket arrived as soon as Chahal was brought back into the attack. The leggie accounted for both Miller and Phelukwayo to reduce South Africa to 7-58.

The wrist-spinners claimed 5-97 between them, proving what a vital component they are to India's fortunes and in the end, it took cameos from Morris [42] and Rabada [31] to take the Proteas past a respectable total of 9-227. 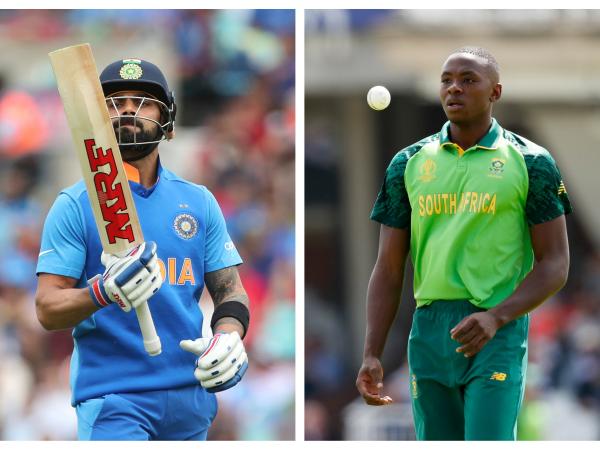 The South African duo of Morris and Rabada made brilliant use of movement and steep bounce that was on offer and nearly got both Dhawan and Rohit, only for the ball to the ballon in the air and fall in no man's land.

Rabada, in particular, looked the most threatening. It was almost as if he was desperate to make an impact on the game. Intensity? check. Seam and bounce? check. Yorkers and a broken bat? check. Rabada was relentless and his efforts finally paid dividends when Shikhar Dhawan finally edged it straight to Quinton de Kock.

With Rabada breathing fire, it was important for both Kohli and Rohit to see off the spell. He welcomed Kohli with a bouncer. The Indian captain started off cautiously but Rohit finally broke the shackles in Rabada's fourth overtaking him for a six over fine-leg before stamping his authority with a cracking square-cut.

Phelukhwayo chips in with the big fish Andile Phelukhwayo's knack of chipping away with wickets came to South Africa's fore once again. The right-hander nearly claimed Rohit in the first when he rapped him on his pads only for the Umpire to turn the appeal down.

But the right-hander plucked away with his line and lengths, especially against Kohli. He finally got the big fish when Kohli, in an attempt to guide the ball to the third man failed to ride the steepling bounce only to see De Kock take a flying one-handed catch on his right.

Rohit and Rahul consolidate the innings

With the score reading 2-50 after Kohli's dismissal, it was imperative on the part of Rohit Sharma to hold the fledgling ship together and the right-hander did just that. Along with KL Rahul, Sharma consolidated the Indian innings with a 97-run stand for the third wicket.

While the fast bowlers continued to pose questions, Rohit made sure he didn't let the spinners to settle from the other end. With Morris bowling superbly from one end, Faf du Plessis would have hoped his spinners to take control from the other end, much like the Indian spinners did. It wasn't the case unfortunately as both Shamsi and Tahir were unable to cause much trouble to both Sharma and Rahul.

Rohit, in particular, looked at ease against Shamsi and Tahir compared to Rabada's pace and Morris pin-point accuracy. Shamsi was all over the place with his line and lengths and Sharma feasted on him. Anything short, Sharma would rock back and cut off the backfoot.

The Indian vice-captain in his trademark hits- a swivel pull behind square for a six and a down the wicket hit over mid-wicket- brought up his 42nd ODI fifty and in the process also became the first Indian to score a half-century in four consecutive ICC event encounters against the Proteas.

But just as Rahul and Rohit were steering India to a comfortable position with the scoring reading at 3-139, Faf du Plessis' move to bring Kagiso Rabada back into the attack paid dividends as the fast bowler induced a false stroke from KL Rahul while trying to drive the ball through the covers.

The ball hit the top of Rahul's bat and ballooned in the air straight to Faf du Plessis to mid-off. Rabada deserved the wicket. You could see the intensity in his eyes and his efforts, but it was that sort of a day that where a top-edge would go would for a six, the ball would drop short of the fielders or from their hands, as was the case with Miller when he dropped a sitter of Rohit Sharma.

On the other hand, Sharma was having that sort of a day where he could run blindfolded on a highway and still not get run-over. But as they say, it is not about the luck, it's about what you do with that luck which separates the men from the boys. Sharma, in a non-typical Rohit Sharma innings, continued to chip away at the target and in the process leapfrogged Sourav Ganguly to become the third highest century-maker for Team India in ODI cricket.

South Africa did attack Dhoni [34] early-on with Shamsi bowling with a short-leg but the former Indian captain eased into his innings and along with Sharma took the Indian total past 200-run mark. Chris Morris accounted for Dhoni when he completed a brilliant catch that saw him end up falling at the stumps.

But Hardik Pandya ensured not much time was wasted thereafter as he blazed away with two backfoot square-cut and a front-of-square pull to bring up a comfortable six-wicket win for Team India.

The game in Numbers-

2nd- This was Team India's second World Cup win against South Africa. The first victory came in the 2015 World Cup at the MCG.

23rd- This was Rohit Sharma's 23rd ODI century. He has now leapfrogged Sourav Ganguly to become the third-highest century maker for India in ODI cricket.

Most ODI 100s for Team India in ODIs-

3rd- Rohit Sharma joined the elite list comprising of Sachin Tendulkar and Shikhar Dhawan to become the third Indian to score a World Cup hundred against the Proteas.