August 14th: End of the Don, start of the Tendulkar era

Some dates remain forever etched in history. Year-after-Year, we revisit the dates with utmost joy, nostalgia or sometimes in agony. If you're an Indian cricket fan, just a mere mention of dates like 25 June 1983, 16 November 1989, 25 September 2007 or 2nd April 2011 proceeds to bring a smile on your face; a smile so wide and natural.

14 August is another one such date etched in the annals of cricketing folklore on. For, it was the date, on which the Master [Don Bradman] played his last Test innings and 42 years later, his closest reflection [as admitted by the Don himself] Sachin Tendulkar scored the first of 50 Test centuries. 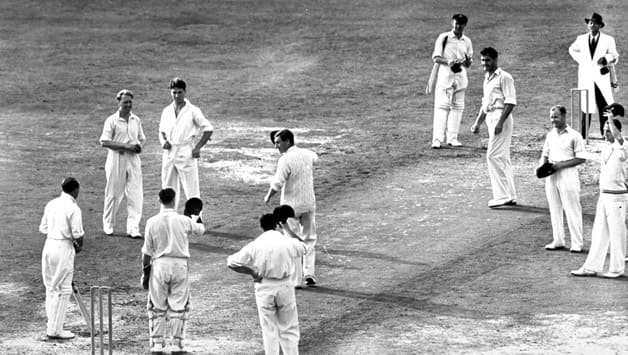 Firstly, let's talk about the Master. It was the fifth Test of the 1948 Ashes. The Australians, having already taken an unassailable 3-0 lead in the series, had dismissed the English for a poultry 52 on the 1st day. The Aussie opening pair of Sid Barnes and Arthur Morris had added 117 for the first wicket and when leg-spinner Eric Hollies dismissed Barnes, all eyes were on Don Bradman, who walked out to bat for the final time. After defending the first ball, Bradman was cleaned up by a googly on the very next ball.

Bradman averaged 101.39 prior to his last innings but courtesy a duck in his final innings, the Don finished his Test career with an astounding average of 99.94 and four short of 7,000 runs.

Fast forward to 42 years- 14 August 1990- and we move to Old Trafford for the emergence of the closest thing (as per Don's admission himself) to the Master Sir Donald Bradman: Sachin Tendulkar. Tendulkar had narrowly missed out on his maiden ton earlier in the year in New Zealand, and the prodigy couldn't have chosen a better day to get off the mark as far as his centuries were concerned.

After setting India a massive target of 408 in the fourth innings, England was hoping to take an unassailable lead in the Test series after having already won the first Test and was gunning to bowl the visitors out on the final day. India lost two early wickets in the form of Navjot Singh Sidhu [0] and Ravi Shastri [12] before Sanjay Manjrekar [50] and Dilip Vengsarkar [32] steadied their fledgling ship with a 74-run stand for the third wicket.

But, just as the partnership was beginning to take India to safety, Manjrekar and Vengsarkar fell in quick succession, bringing Azhar and the 17-year-old Sachin to the crease. Azhar fell after hitting two boundaries to Eddy Hemmings. Hemmings also accounted for Kapil Dev by breaking through the all-rounder's defense. With India reeling at 6-183, England was harboring the chances of bowling India out cheaply.

But, the script was about to go awry for the hosts. For, there stood a 17-year-old prodigy eager to stamp his authority on International cricket. And, he did it with aplomb. In an innings that stretched over three hours and 224 minutes, Tendulkar showed maturity beyond his years to score a nonchalant 119* and along with Manoj Prabhakar (67 not out) stitched an unbeaten 160-run stand to save the day for his country.

Tendulkar would go on to add another 99 tons during the course of the next two decades and finished as the first batter to score a half-century of tons in Test cricket.