India vs South Africa - World Cup Rivalry & The Road Ahead 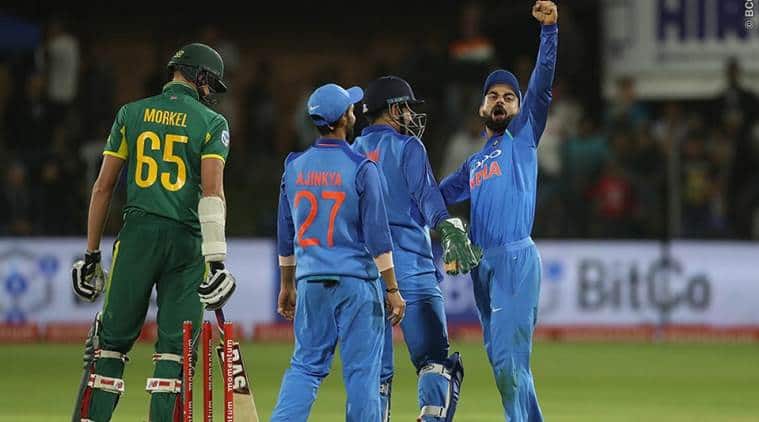 It might not have much historical context but India vs South Africa has been one of the most intensely fought rivalries in cricket. For the longest time, India remained a boggy side which South Africa would dispose of with ease at the World Cup stage. It took the Men in Blue 23 years and three chastening defeats to finally get the monkey off their back when the Dhoni-led unit disposed of the African challenge with disdain in the 2015 World Cup at the iconic Melbourne Cricket Ground.

With the Men in Blue set to resume their rivalry with South Africa in their World Cup opener at Southampton on June 05, we at the Bharat Army go down memory lane to re-live what has been a rivalry filled with a heartbreaks, collapses and disappointment for the Indian fans barring the silver lining in the 2015 event.

A look at India vs South Africa World Cup encounter- The 1992 World Cup saw the return of South Africa to the international arena after the apartheid era, and it was the first time that the world witnessed the precocious talent of players like Alan Donald and Jonty Rhodes who would in future go on to become legends of the game.

India was struggling to keep afloat in the tournament leading into the South Africa game, and with just two wins in seven games, it was a must-win encounter for the Men in Blue. With rain delaying the start, the match was reduced to 30-overs a side. Batting first, India got off to a worst possible start after Kris Shrikanth fell in the fast over when in trying to flick the ball of his legs, he closed the face of the bat early to give a simple catch to Kirsten at short-cover.

Skipper Mohammad Azaharuddin looked in pristine touch during his knock of 79 [77]. The Indian captain played some delightful looking strokes all around the wicket and along with Sanjay Manjrekar [28] stitched a 78-run stand for the second wicket. The partnership ended when Manjrekar was cleaned up by Kuiper. Sachin Tendulkar scored a run-a-ball 14 before getting holed out to Kepler Wessels at mid-on but Kapil Dev's enterprising cameo [42 off 29 balls] and his 71-run partnership with Mohammad Azharuddin meant India posted a more than competitive 6-180 after 30 overs.

Chasing in excess of five runs per over was considered an arduous task in those days but the opening duo of Hudson [53] and Peter Kirsten [84] had other ideas. Barring Sachin Tendulkar [0-20 in 6 overs], every Indian bowler was carted around the park for more than six runs per over as Hudson and Kirsten accumulated an eventual match-winning opening partnership of 128 as the Proteas romped home by six wickets in the end. 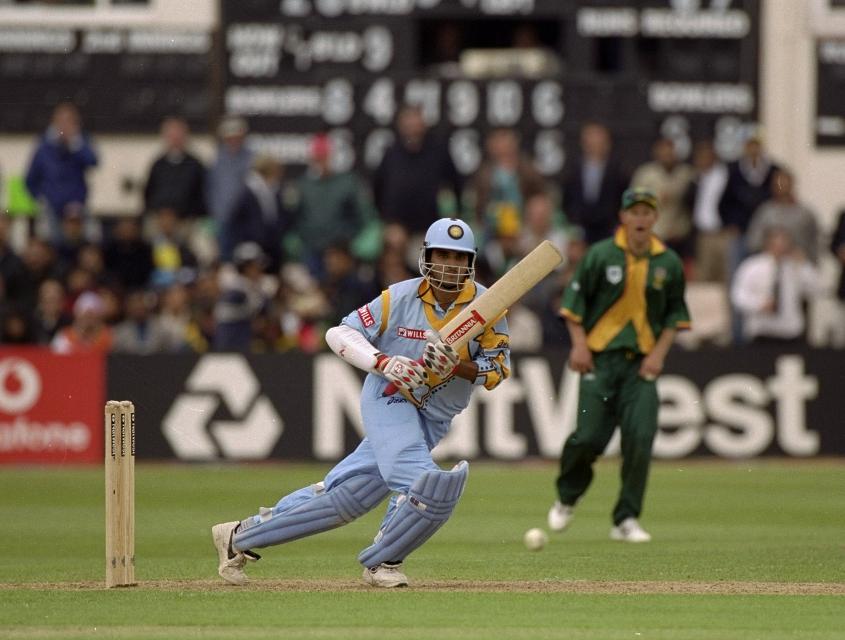 The 1999 World Cup came to England after 12 years and India found themselves in the same group with South Africa. Like in 1992, Team India batted first at Brighton. Sourav Ganguly and Sachin Tendulkar got the Men in Blue off to a steady start with a 67-run stand for the first wicket.

Lance Klusner dealt the first blow to India when he accounted for the Master Blaster for 28 but Sourav Ganguly and Rahul Dravid held the fort with a 130-run stand for the second wicket. Ganguly, in particular, looked in sublime touch as carted the fast bowlers to all corners of the ground before taking the left-arm spinner Nicky Boje down-town. Lance Klusener once again broke the shackles for the Proteas with the ball when he cleaned up Rahul Dravid for 54.

But with Ganguly looking in ominous touch, India looked prime for a big target. But a sensational fielding effort from Jonty Rhodes caught the left-hander short of his crease ending his innings at 97. Run-a-ball innings from Mohammad Azharuddin [24] and Ajay Jadeja [14] took India past the 250-mark and the Men in Blue eventually posted 5-253 after 50 overs.

Unlike the 1992 match where the Indian opening bowlers failed to get early breakthroughs, Javagal Srinath sent Gibbs and Kirsten packing to leave the Proteas reeling at 2-22. 2-22 soon turned 3-68 when Anil Kumble cleaned up Mark Boucher for 34.

But, Jacques Kallis held the fort for his side with a sublime 122-ball-96 and along with the likes of Cullinan [19], Hansie Cronje [27] and Jonty Rhodes [39 not out] continue to chip away at the target. When he was, unfortunately, run-out for 96, the scoreboard read 6-227 after 45.4 overs and any hopes that were ignited for India were quickly squashed away by a certain Lance Klusener. Klusner smoked three boundaries of the four balls he faced to inflict a five-wicket loss on the Men in Blue. 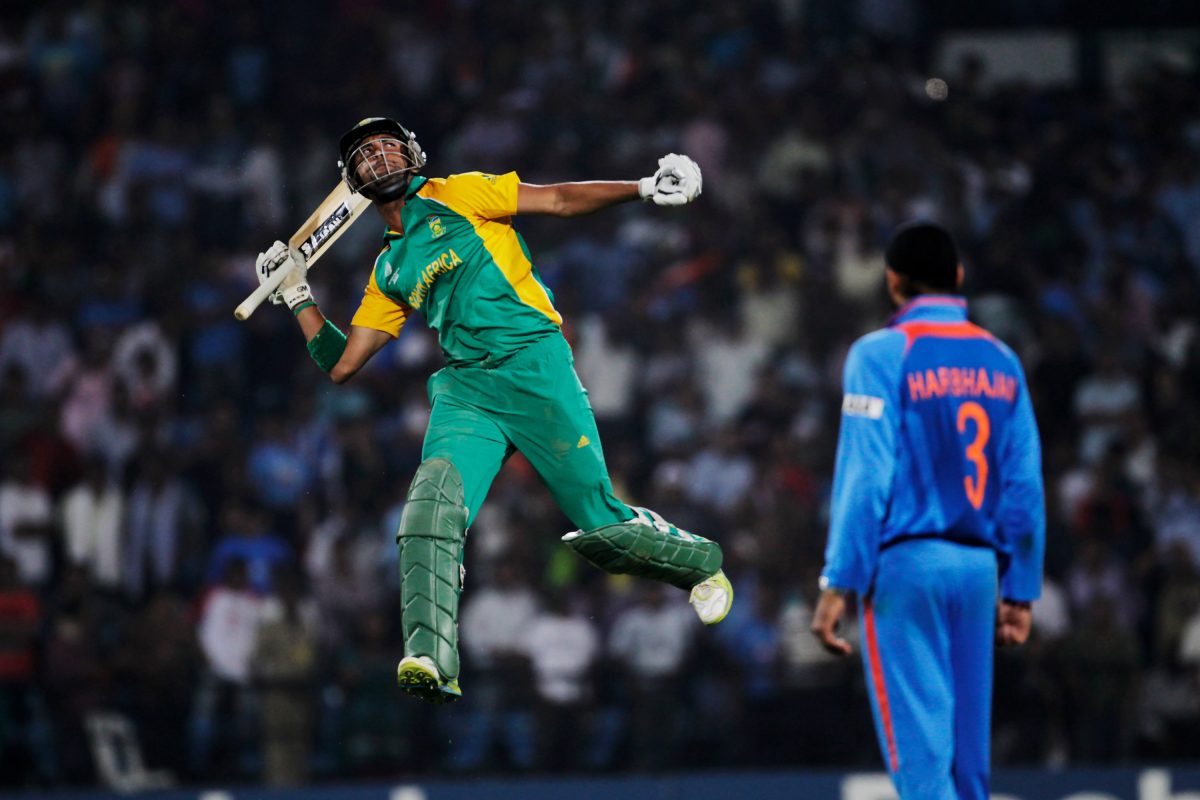 "A collapse for the ages", It is this statement that comes to mind instantly while writing or talking about the 2011 World Cup encounter between India and South Africa. India had been beaten twice by the Proteas in World Cup cricket but is their loss at Nagpur on the 12th of March, 2011 that would have hurt you the most as an Indian cricket fan. For, how would you explain or fathom that a team who at one stage was coasting at 1-267 after the 40 over mark managed to lose their last nine wickets for 29 runs? You can't.

It was a surreal day at Nagpur, one, that once again testified the age-old cliche "Cricket is a funny game". The Indian team was to experience that cliche the hard way. But, first the good part: As usual Virender Sehwag set the ball rolling by heaving Dale Steyn over mid-wicket off the very first ball. What followed for the next 39.2 overs was mayhem. Tendulkar and Sehwag launched an astonishing assault on the South African bowlers, matching each other strokes-for-strokes.

The Men in Blue blazed their way to 0-142 inside 20 overs before Sehwag was finally bowled by Faf du Plessis for 73. But the Master Blaster carried on with his merry way and went on to register his 99th International ton and along with Gautam Gambhir [69] took the score past 250 inside 40 overs. This is where the fun part ends. Tendulkar fell to Morne Morkel while Dale Steyn removed Gambhir in the space of three balls. What followed was a staggering collapse coupled by two factors: brilliant bowling by Dale Steyn helped by insipid batting by India.

India was eventually bowled out for 296 and on a falt pitch, the bowlers had their work cut out. Hashim Amla [61] led the way for South Africa at the top of the order and with the Kallis [69] stitched a valuable 86-run stand for the second wicket. Amla was dismissed by Harbhajan [3-53] to bring AB de Villiers to the crease. de Villiers held the run-chase together after Kallis was run-out for 69.

Faf du Plessis [25], JP Duminy [23] and Johan Botha [23] too chipped in with handy contributions but India kept chipping away at the wickets. In the end, it all boiled down to 12 runs off the last over and Robin Peterson finished it off in style with a six and a boundary in successive deliveries of Ashish Nehra to stun the crowd and hand India what would be their only loss in the tournament.

This time too India batted first against South Africa in a World Cup encounter. They did not get off to the best of starts with Rohit Sharma getting run-out. But Shikhar Dhawan and Rohit Sardana played perfect old school cricket to set a platform for the side with a 127-run stand.

Kohli fell for 46 but Dhawan and Rahane ensured India never squandered the platform they'd set. Dhawan flicked, pulled and swiveled his way to a career-best 137 while Rahane played a game-changing knock of 79- the highlight of which was the six that he hit down the ground off Dale Steyn, to help India post a competitive 9-307.

But with the Proteas boasting of the likes of de Kock, de Villiers, du Plessis, and David Miller, the Indian bowlers had their work out. South Africa's penchant with run-outs and subsequent collapse on big days came back to haunt them again. After the opening bowlers had removed Quinton de Kock [7] and Amla [22] with South Africa's score reading 2-40, skipper AB de Villiers [30] and Faf du Plessis [55] held the innings together with a 68-run stand for the third wicket. 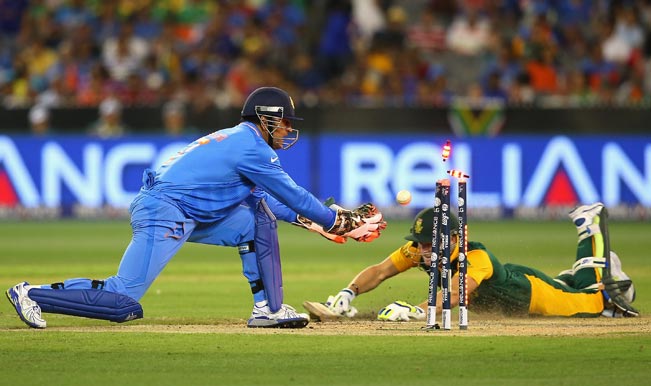 But, just when it looked like the duo were warming up for a big partnership, calamity struck. Like in the 2011 World Cup quarter-final against New Zealand, de Villiers got run-out while trying to steal the second run.

The Proteas could never recover from the run-out of de Villiers as an appalling batting display thereafter saw them lose their last seven wickets for 69, handing India their maiden win over their Southern Hemisphere opponents. That it came by a margin of 130 runs was a cherry on the cake.

India vs South Africa- The rivalry in Numbers- On the 5th of June 2019, India and South Africa will kickstart their World Cup rivalry at Southampton, and it will be the first time in history that Team India will go into the encounter as favorites.

After their 3-2 win in India in 2015, the Men in Blue have dominated the Proteas in ODI cricket. Besides beating the AB de Villiers-led unit in the 2017 Champions Trophy, Kohli's men scripted a historic 5-1 victory over the South Africans.

During that series, Virat Kohli scored three hundred [558 runs] in six games but it was the spin twins (Kuldeep and Chahal) which led to the demise of the South Africans. With AB de Villiers no longer a part of the set-up, the onus will be on the likes of Faf du Plessis, JP Duminy, and David Miller to counter the threat of Kuldeep and Chahal in the middle-overs

But one aspect of South Africa's line-up remains the same: their bowling. In Kagiso Rabada, Lungisani Ngidi, Dale Steyn and Imran Tahir, the Proteas have a potent bowling unit and if their batting can handle the pressure of India's wrist-spinners, they are more than capable of staging what some will assume an upset.