Olympics 2021: A fairytale event for Team India
The Summer Olympics in Tokyo, Japan, proved to be the most successful campaign for Team India as multiple athletes across various sports won laurels for the country.
A total of 126 competitors- India's largest ever contingent since its first appearance in 1920  participated in the marquee event and eventually 7 of them won the laurels.
India bagged a total of 7 medals- 1 gold, 2 silver, and 4 bronze- across 69 events and 18 athletic disciplines. In the individual sport, men's javelin thrower Neeraj Chopra scripted history as he became India's first-ever athlete to win an individual gold since Abhinav Bindra (shooting) 2008 Beijing Olympics. This was also India's first athletic medal since its first Olympic appearance as an independent nation (1948). 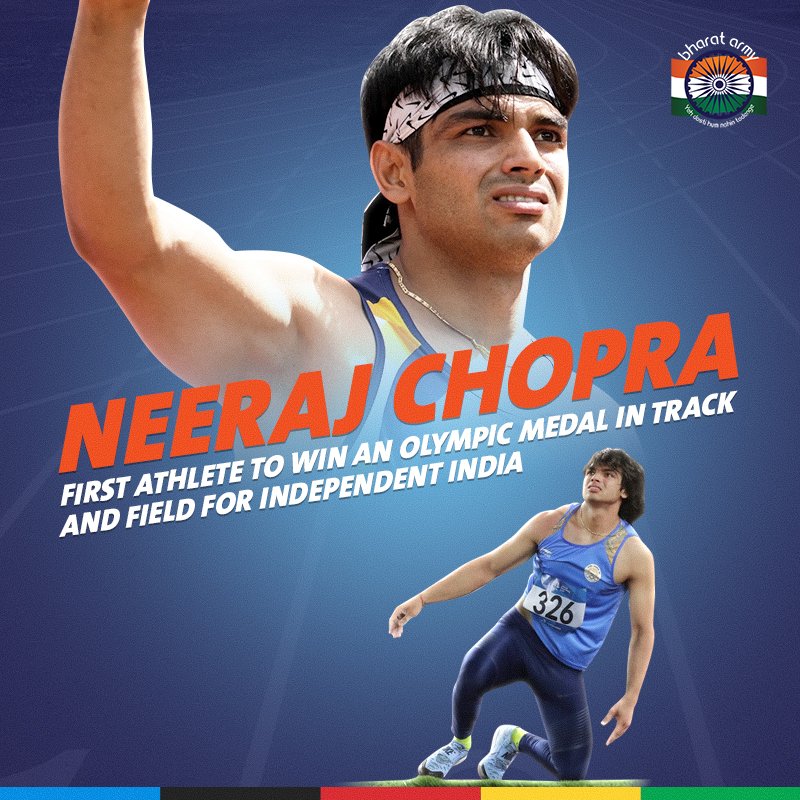 Champion weightlifter Saikhom Mirabai Chanu helped India win her first-ever silver medal in weightlifting (48 kg) as she became India's first-ever medalists in the sport since the turn of century.
Ace shuttler PV Sindhu missed out on winning gold and silver but she made up for it by winning a bronze in women's badminton to become the first Indian female athlete and second Indian to win consecutive Olympic medals.
Golfer Aditi Ashok and men's freestyle wrestler Deepak Punia (86 kg) both achieved fourth rank, as did the Women’s Hockey team. The Women's hockey team scripted history by beating Australia 1-0 in the quarter-finals to qualify for the semis for the first time in their history. They came unstuck against Argentina (2-1) in the semis but not before they had won a billion hearts with their performance.
The story of Olympics 2020 was the performance of the men's hockey team, who rolled back the years to the glory days by bagging a medal (bronze) for the first time since 1980.
India defeated Great Britain (3-1) in the quarter-finals but eventually went down to Belgium (2-5) in the semis. The Men in Blue, however, secured a bronze as they defeated Germany (4-5) in the dying moments of the game.
India at the Paralympics
Team India registered their best ever performance at the Paralympics as they claimed a total of 19 medals which included 5 gold, 8 silver and 6 bronze. 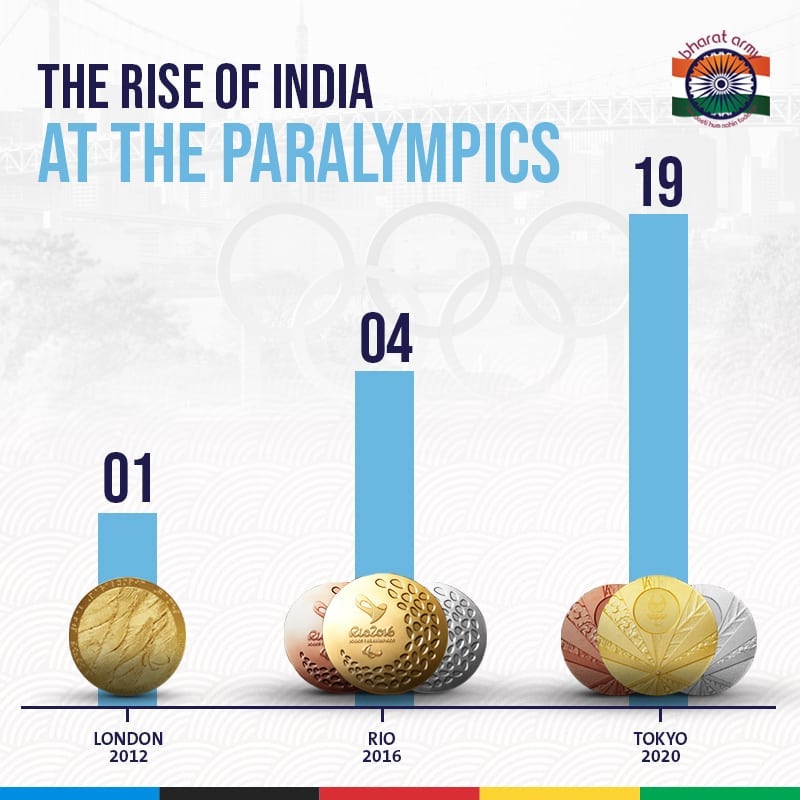 Shooter Avani Lekhara became the first Indian women to win an individual gold as well as multiple medals (10m Air Rifle and bronze in 50m Rifle 3 Positions SH1).
Also, Badminton player Suhas Lalinakere Yathiraj became the first civil servant to win a Paralympic medal (silver in SL4 category)
Indian Women's Cricket Team: Another year of so close-yet-so far moments
Another year where the Women in Blue put up some brilliantly individual and collective performances as a team but more often than not, they failed to win the crucial moments thanks to inexperience, poor fielding and some questionable tactics.
India managed just three ODI wins out of 8 as they lost series in England and Australia. However, despite the series defeats, India managed to add a feather to their cap as they ended Australia’s ODI winning streak by winning the final game of the three-match series
They also lost 6 out of the 9 T20Is they played.
However, just like their men's counterparts, the Women in Blue did exceedingly well in Test cricket. They held onto a famous draw in their maiden Test since 2014 in England before bossing Australia in their den in the pink-ball Test. 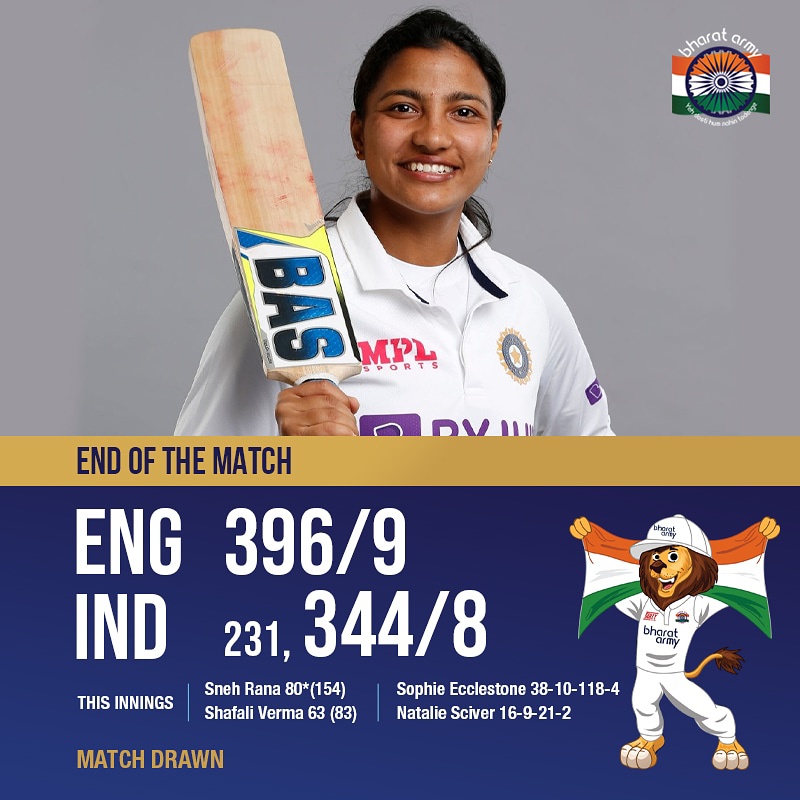 Smriti Mandhana became the second Indian batter to score a pink ball ton while Sneh Rana showed amazing grit in England to help her side draw the Test.
Shafali Verma showcased her potential in the Test arena as she smashed a couple of brilliant half-centuries in England while Harleen Deol's freak catch at the boundary during the first T20I in England became one of the most talked-about events in cricketing folklore.
IPL 2021: Chennai Super Kings complete a stunning redemption following the shambles of 2020
CSK was written off by almost everyone last year as they failed to qualify for the playoffs for the first time since the inception of the IPL last year.
However, as has been the case in the past, the MS Dhoni-led unit staged a stunning redemption as they scripted their 4th title triumph. 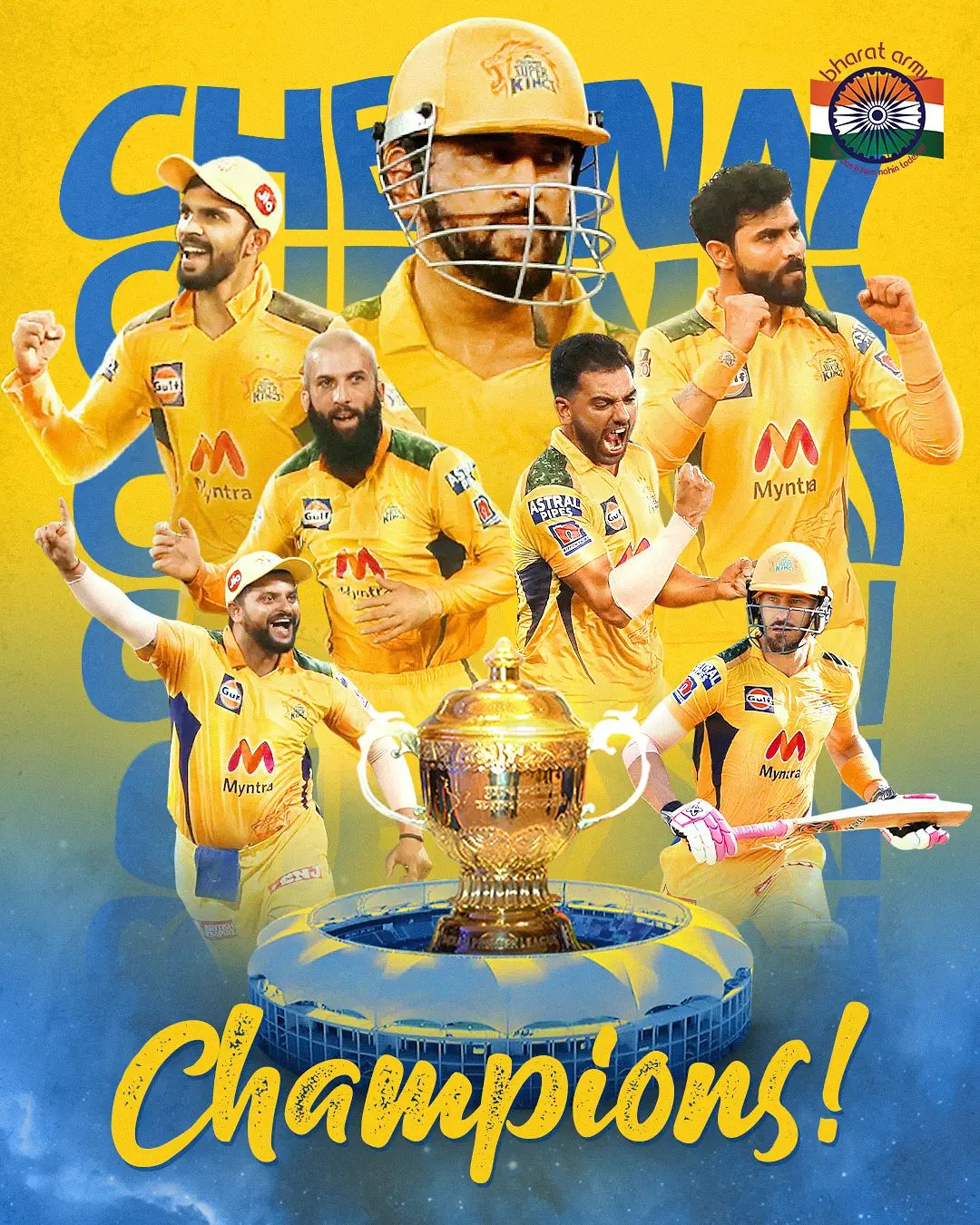 It didn't start well for CSK as they lost their opening game to DC comfortably. However, post that game, the Dad's army slowly started their upward trajectory as they found new heroes in every game who stepped up to the occasion when it mattered.
CSK won their next 5 games on the bounce before a special knock from Kieron Pollard halted their juggernaut. The IPL was eventually postponed midway through the season due to Covid-19 pandemic.
However, a five month gap did not have any bearing on CSK as they resumed their campaign with a resounding win over MI. The Super Kings became the first side to qualify for the playoffs and while they did lose their last three league games on the bounce, they peaked when it mattered.
MS Dhoni rolled back the years as he applied finishing touches in the first Qualifier against DC before a clinical performance against KKR in the final propelled them to their 4th title.
Ruturaj Gaikwad won the Orange Cap as he finished as the leading run-getter (635 runs in 16 games at an average of 45.36 and a strike rate of 136.27) while RCB's Harshal Patel (32 wickets in 15 games at an average of 14.34) claimed the Purple Cap.
Defending champions Mumbai Indians had a forgettable campaign as they failed to make it to the playoffs, while Virat Kohli's last assignment as RCB skipper ended in a heartbreak as the Bangalore franchise once again failed to go past the Eliminator stage.
KKR completed a fairytale comeback for the ages as they went from being at the bottom of the table in the first half to eventually ending as runners-up.
T20 World Cup 2021: Kohli's final ICC event as skipper ends in a disaster
Much was expected from Team India ahead of the T20 World Cup thanks to their brilliant performances in the format for over 5 years.
However, it all came crashing down for the Men in Blue as they lost their first couple of games to Pakistan and New Zealand to bow out of the competition.
Pakistan scripted their maiden WC win over India with a ten-wicket hammering in Dubai while New Zealand choked the Indian batsmen to the hilt in a do-or-die encounter. 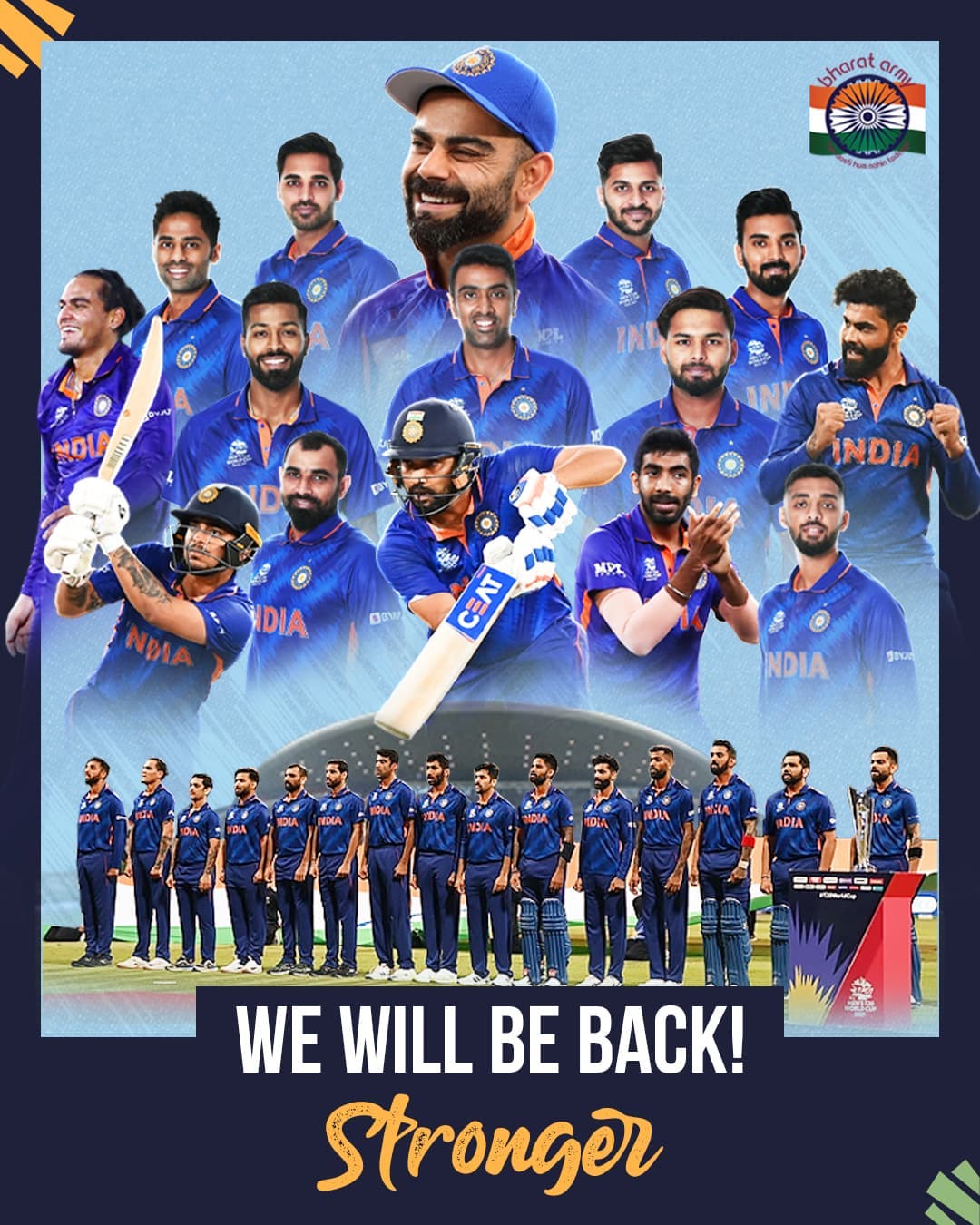 India did manage to redeem themselves by winning their remaining three fixtures but it proved to be too little too late as Kohli's men failed to qualify for the semis for the first time since 2012.
Indian Test Team - A year right out of a fairytale
It all started with relentless grit in Sydney as Cheteshwar Pujara, Rishabh Pant, R Ashwin and Hanuma Vihar put their bodies on the line to deny Australia what looked like a certain win in Sydney.
Then, we saw panache, fearlessness, the exuberance of youth and dodgedness of experienced campaigners like Pujara at the Gabba as the likes of Washington Sundar, T Natarajan, Mohammed Siraj, Shardul Thakur, Rishabh Pant and Shubman Gill scripted a heist for the ages at the Gabba to seal their second consecutive series Down Under. 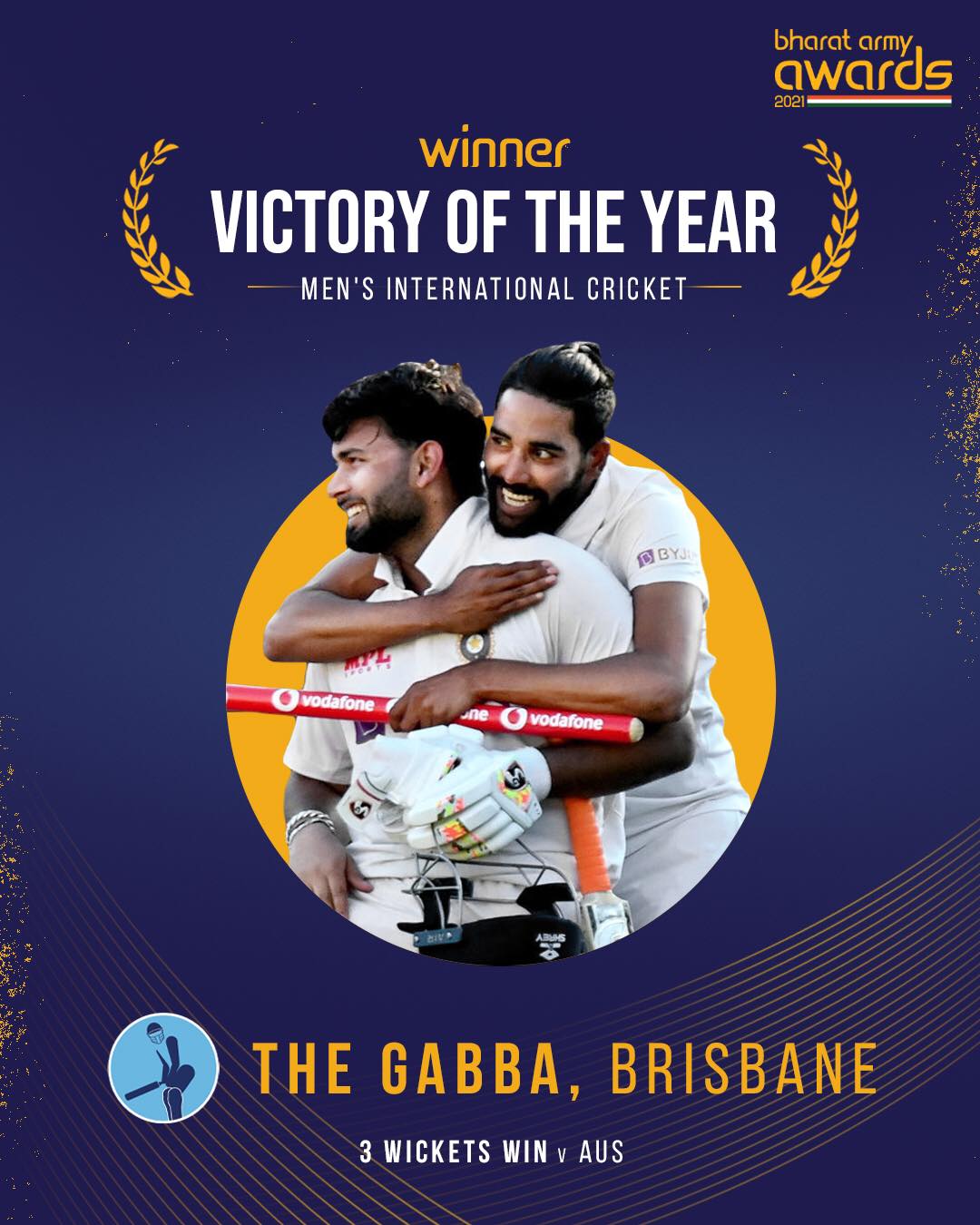 India smashed England 3-1 on home soil to qualify for the World Test championship final, where they came unstuck against New Zealand.
That blip aside, it was a fairytale year for India as it breached one obscure territory after another to assert themselves as the best Test team of the current era.
India went on to claim resounding wins at Lord's and Oval to lead the five-match series 2-1.
Home dominance continued as India beat WTC champions New Zealand 1-0 before capping off the year with another historic win in Centurion by 113 runs.
India won 4 Tests in SENA this year, which is also the same number of Tests they won in these countries between 1990-2007. They won a total of 8 Tests this year and didn't drop a single rubber, the only team to do so this year.